In 1998, the Food and Drug Administration approved the first closed-system drug transfer device (CSTD), PhaSeal. Since then, the United States has seen the addition of four new products with more expected to enter the market in the near future (see Table 1). The National Institute of Occupational Safety and Health (NIOSH) and the American Society of Health-system Pharmacists (ASHP) guidance documents1,2 recommend that a CSTD be considered to minimize occupational exposure to hazardous drugs during compounding and administration processes. Each device has its own unique mechanism for the transfer of hazardous drugs, however, to be considered a true CSTD, the NIOSH definition clearly states that the system must demonstrate containment from spills and leakage as well as aerosols and vapors. To ascertain these abilities in real use circumstances, it is important to review CSTD effectiveness in independent studies outside of the studies vendors perform on their own devices. 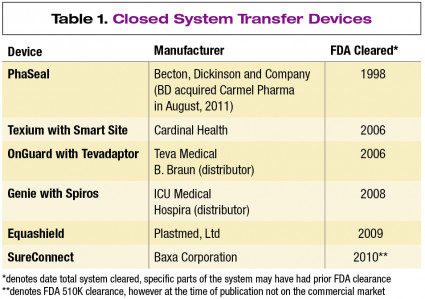 Assessing New Products
In the continuing effort to minimize the exposure of healthcare professionals to hazardous drugs, anytime a device performs in a different manner it warrants further investigation. Such is the case with the newest entry into the US CSTD market, Equashield. When manipulating liquids within the device’s syringe, it is possible to transfer some of the liquid material behind the plunger tip, which can happen simply by inverting the syringe and pushing up on the plunger. While such an action is not part of the normal operating instructions for this product, it is something that may happen, especially with users new to the system.

Despite liquid material being caught behind the plunger tip, it is still maintained within the closed system and is recoverable. Being able to recover this volume of material is desirable in the case of high-cost mediations such as chemotherapy. However, in this situation the liquid is in direct contact with the metal syringe plunger used by this product. There is a double O-ring in place at the top of the barrel to ensure any material that comes in contact with the plunger is contained within the closed system. While there is a study that assessed the cyclophosphamide residuals on the plunger rod during normal operation3, there do not appear to be any studies addressing the possibility of transfer of materials to the plunger rod in the case of liquid material build up behind the plunger tip.

Due to the unique device characteristics of Equashield, we set out to assess the possibility of contamination of the plunger rod during accidental transfer and recovery of materials behind the plunger tip when using Equashield closed-system transfer syringes.

Methods
In order to perform the test, we used fluorescein disodium salt, lemon juice, and green food coloring to assess the potential for contamination of the plunger rod. The fluorescein disodium salt was prepared as a 0.05% w/v solution to be used as a fluorescent indicator. Undiluted lemon juice and litmus paper were used to assess potential transfer to the plunger rod. Undiluted green food coloring and 4x4 inch gauze was used to assess transfer. Ten mL of each solution was added to an empty 10 mL vial and a rubber stopper and aluminum seal cap were added and crimped to the vial. An Equashield VA-20 vial adaptor was added to the top of each vial and 10 mL of each solution was drawn up into separate Equashield SU-20 syringes. In each case, the solution was intentionally transferred to the rear chamber of the syringe by inverting the syringe and applying pressure to the plunger. Once each solution was in contact with the metal plunger rod, the syringe was held in that same inverted position and the plunger was drawn in and out five times. The metal plunger rod was then wiped with the appropriate material and assessed for potential contamination. 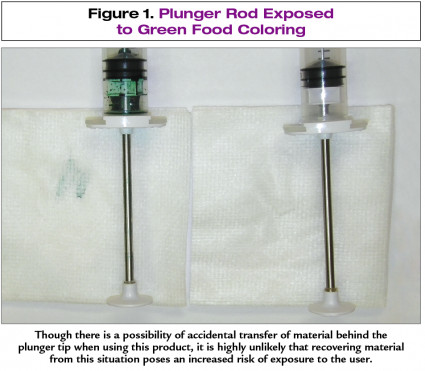 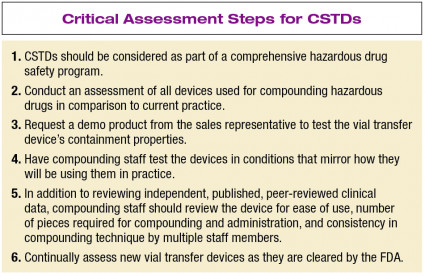 Several chemotherapy agents in use today are suspended in a hydrophobic vehicle to aid in the solubility of these otherwise insoluble compounds. Paclitaxel (Taxol Bristol-Myers Squibb, Princeton, NJ) uses a synthetic, non-ionic surfactant (Cremophore EL, polyoxyethylated castor oil) to stabilize the aqueous solution in the commercially available form of this drug. Using a chemotherapeutic agent that uses a hydrophobic vehicle it would be theoretically possible to contaminate the metal plunger rod when recovering material accidentally transferred behind the plunger.

Conclusions
Though there is a possibility of accidental transfer of material behind the plunger tip when using this product, it is highly unlikely that recovering material from this situation poses an increased risk of exposure to the user. In the case of highly lipophilic agents, if such a situation occurs, extra precaution in avoiding contact with the plunger rod may be warranted. Due to the costly nature of chemotherapeutic agents and the desire to conserve even minute amounts when manipulating them, it is our opinion that recovery of this material is acceptable.

A detailed explanation of CSTD assessments is available at www.pppmag.com/AssessingVialTransferDevices

Dan Griesen, MS, PharmD, is a PGY1 pharmacy resident at the Nebraska Methodist Hospital in Omaha, Nebraska. He received his pharmacy degree from the University of Nebraska Medical Center College of Pharmacy.

Firouzan “Fred” Massoomi, PharmD, FASHP, received his doctorate from the University of Kansas School of Pharmacy and has served as the pharmacy operations coordinator at Nebraska Methodist Hospital for the past 11 years. Fred received the Health-System Pharmacist of the Year award from the Nebraska Pharmacists Association in 2004 for his work in emergency preparedness, was selected as a Fellow of the ASHP in 2006, and was named Innovative Pharmacist of the Year by the Nebraska Pharmacists Association in 2007.