Acquiring and providing unit dose medications often requires employing a few different methods, and determining the best combination of methods requires a good understanding of the cost and value of outsourced services, the time and labor involved, and what waste is produced. Other factors also must be considered, including whether your wholesaler has the products you want in unit dose or your facility uses enough of a given product that buying it in bulk and having it repackaged is fiscally responsible. Even though the market continues to shift, with more manufacturers producing more medications in unit dose form, each pharmacy needs to determine what combination of direct unit dose purchasing, in-house repackaging, and outsourced repackaging works best for its operation.

Repackaging Challenges
MedStar Montgomery Medical Center is a 149-bed, non-profit, acute-care hospital located in Olney, Maryland. About four years ago, we began working with our wholesaler on repackaging into unit dose, and we began regularly ordering about two dozen tablet-form, unit dose medications in this way. While this has been helpful to our unit dosing efforts, generally there has been no deviating from the strict, and somewhat limited list of drugs they offer. For example, a brand name medication may have been available in unit dose, but if we wanted to use a less expensive generic, we had no alternative.

Montgomery has employed some internal method of unit dose packaging for over 30 years, but as the volume of medications grew along with the level of sophistication built into medication labeling, the earliest methods of in-house unit dose packaging became obsolete as they could not handle bar codes. In addition, Medstar’s initial attempt to localize repackaging by having an outside company set up locally ultimately failed due to poor turn around times that compromised the return on investment. In order to address issues we were having in acquiring the non-manufacturer unit dose medications we needed, MedStar chose to contract with an established outsourced unit dose repackager in early 2011.

Currently, approximately 6-8% of our unit dose drug inventory is provided to us through a repackager, but this remains an important service for us. In many cases, manufacturers have done a very good job of making drugs available in a unit dose format, so approximately 80-85% of the drugs we acquire are already in unit dose. However, we have had some issues with some products. Initially, fully readable bar codes were not universal among manufacturers, and when some manufacturers began using new 2D bar codes, our scanners were not properly programed to accept them. In that case, we had to go back to self-packaging for a period of six to eight weeks until the scanners could be reprogrammed. Other issues included poor label printers that produced unreadable bar codes and bar codes that were printed on silver backing, which creates too much reflection to be scanned. Our current repackager has worked with us to ensure each unit dose medication is compatible with our bar code scanning system, and we have had very few issues with this.

Deciding Between Outsourcing and In-house Packaging
For us, the primary determining factor of whether to outsource or repackage bulk medications in-house is usage. The tipping point we established is 100 doses a year, where less than that amount of use falls to in-house packaging. For our commonly used drugs that do not come in unit dose, routing these through the repackager provides us with safe, properly packaged doses every time without us having to expend the labor and time of doing it ourselves. They are also able to provide some liquid unit dose medications, which saves additional time and resources. While products can still take up to seven days to arrive after ordering, the efficiencies of scale make this process worthwhile.

We still repackage certain items ourselves because they are rarely used or there are unique characteristics that repackagers do not wish to deal with, such as controlled substances and penicillin class drugs. It is worth noting that there are a few drugs for which repackaging is inappropriate, such as Aggrenox, because the manufacturer cannot guarantee the expiration date if the drug is removed from the original package. In this case, if we send the drug for administration and it comes back to the pharmacy unused, we have to dispose of that dose. 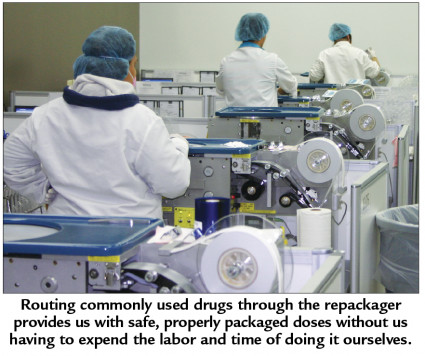 Outsourcing Costs
One issue worth paying attention to is the way in which the unit dosed products will be shipped to the pharmacy and how that expense will be covered. For example, many commonly used drugs, which make up a large portion of what we route through the repackager, are relatively cheap to purchase, but if the cost of the drug, the cost of the repackaging, and the cost of shipping are all coming out of pharmacy’s budget, it is wise to negotiate these costs. Furthermore, shipping costs vary based on type (eg, liquid vs solid) and volume. Keep in mind that individually packaged unit doses that are returned to the pharmacy can usually be reused, whereas if the drug has just been placed in a brown vial and sent to the floor, any returns will have to be thrown out.

If you are considering using an outsourced repackager for unit dose medications, also be certain to discuss what products can be handled. One company we previously worked with did not want to repackage suspensions because they need constant mixing. It is also uncommon for repackagers to handle penicillin-class antibiotics or narcotics because these products have specific requirements for repackaging, which often preclude outside packagers from working with them.

Gary Magnus, RPh, MS Pharm, is the pharmacy team leader at MedStar Montgomery Medical Center in Olney, Maryland. He received his master’s degree in administrative pharmacy from the University of Maryland at Baltimore.