The pharmacy department at the Cleveland Clinic implemented a new USP <797>-compliant cleanroom in October of 2007 and at that time, pharmacy cleanroom personnel assumed most of the required cleaning activities. One exception to this was the daily floor cleaning, which was the responsibility of third shift environmental services personnel. Since the personnel completing this task did not report to pharmacy, we had little ability to train them or manage their performance and no control over who was assigned to the task. We also were unable to control the materials and cleaning agents used. In order to address these deficiencies and to ensure that the floor cleaning process was effective and efficient, we implemented an alternative cleaning process managed by pharmacy personnel.

Maintenance around Workload
As with most maintenance functions in the pharmacy, success depends on finding the optimal time within which to limit or stop certain operational activities to allow maintenance to be performed. In studying this, we realized floor cleaning would need to be performed during the first or second shift, as pharmacy staff availability is limited during third shift. Furthermore, third shift technicians rotate assignments, creating inconsistency, and they also report to a different manager, which would make follow-up and accountability cumbersome.

After an initial review of average workflow and workload, we assigned most of the cleanroom floor cleaning to second shift pharmacy technicians because this period allowed for the task to be completed while compounding was suspended. Following a change in scheduled patient-specific batches, cleaning was moved to first shift, as the new just-in-time compounding strategy shifted more compounding to the second shift, thereby leaving sufficient time for the task to be completed on first shift. Currently, sections to be cleaned are delegated by the lead technician on a daily basis. 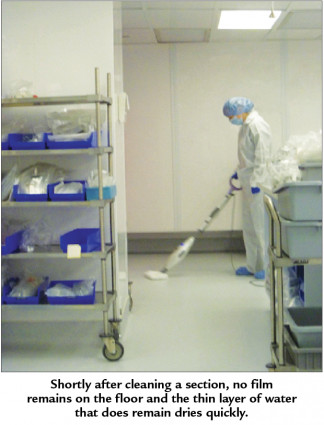 Switch to Steam Mopping
In addition to studying workflow, we wanted to make sure we were using the most effective tools to clean and disinfect the cleanroom floors. In this case, we evaluated traditional wet mopping methods, equipment, and supplies, as well as several commercially available steam mops and their related equipment and supplies for ease of use and effectiveness at cleaning our floors.

In our study, we found that traditional wet mopping presents several challenges, especially for a large cleanroom. Water-based methods can be physically challenging because the combined weight of the water and a large mop bucket make it difficult to access appropriate facilities to empty, clean, and refill the bucket without having to lift it well off the floor. Furthermore, prolonged cleaning and drying time can interrupt compounding activities and introduce potential safety risks due to wet floors. Water-based methods require personnel to mix the correct cleaning agents appropriately and some cleaning agents require the use of specific personnel protective equipment. The mopping system itself requires multiple replacement parts, such as clean, non-shedding mop heads and extra buckets. Despite these drawbacks, wet mopping has been shown to properly clean and disinfect cleanroom floors to USP <797> standards.

As an alternate, steam mops use plain water to produce high temperature steam that is then applied to the floor surface by a microfiber mop cover. The steam mops we evaluated, and ultimately purchased, are household steam mops that do not require cleaning solutions, just sterile water that is changed daily. The steam mops range in weight from four pounds to almost ten pounds—the water reservoirs can hold eight ounces to one liter of water—and have an operating time of 20 minutes.

We determined that the steam mops were effective at removing visible dirt including adhesives from the floors and the microfiber material also appeared effective at retaining the dirt removed. Shortly after cleaning a section, no film remains on the floor and the thin layer of water that does remain dries quickly. In addition to direct cleaning effectiveness and weight, we considered other factors including cost per unit, cost of disposables, ease of use, and electrical cord length.

Pharmacy Driven Cleaning
After performing these tests, we decided to purchase several steam mop units. We have multiple cleanrooms, some of which are big, so all cleanrooms have at least one mop unit specific to the cleanroom and one unit for use in the ante-areas. The largest clean room—approximately 2200 square feet—has three units for the cleanroom and one for the ante-areas. These multiple units are necessary to get the cleaning done in a reasonable amount of time using available personnel.

We have found these units to be light weight and easy to operate, and the electrical cord is long enough to allow a cleaning range of approximately 700 square feet without changing outlets. Like everything in a cleanroom, each unit’s cord is wiped down with IPA on a regular basis and the units are not removed from the clean environment in order to limit the chances of cross contamination.

Ultimately, pharmacy personnel are best equipped to perform cleanroom floor cleaning, as they understand the requirements and are motivated to maintain the integrity of the cleanroom. It is our opinion that use of commercially available steam mops is an environmentally friendly, effective, easy, and even fun method for the daily cleaning of cleanroom floors. Our floors are visibly cleaner and our technical staff members take pride and ownership for the maintenance of their work area.

Kathleen Conway, CPhT, has been a certified technician for five years and has worked at the Cleveland Clinic for four years, primarily handling sterile products.

Angela Yaniv, PharmD, is the assistant director of pharmacy for sterile products at Cleveland Clinic in Cleveland, Ohio.