Installing motion-sensitive doors and pass-through windows in cleanrooms improves workflow, saves space, and reduces the likelihood of contamination, as we recently found when our cleanroom at St. Alexius Medical Center in Bismarck, North Dakota underwent a complete remodel. During the final planning stages of the project, a registered pharmacy technician who had previously worked in another facility’s newly remodeled USP <797>-compliant cleanroom—and witnessed the benefits firsthand—suggested that we consider including an automatic, motion-activated cleanroom door and pass-through windows between our anteroom and cleanroom as part of the renovation. We were immediately intrigued by the idea and moved to investigate the possibility.

Choosing Smart Design
Through an Internet search, we identified a firm that manufactures automatic sliding doors, as well as bi-parting, flush-mount, automatic windows—similar to those used in fast-food restaurant drive-throughs. A local commercial and residential glass company that is a factory-authorized dealer of our chosen manufacturer supplied our architect with the exact specifications needed to incorporate the automatic windows and door into our plans. Because this was a local vendor that was familiar with the products, we knew we could be assured of reliable service for the doors and pass-throughs, a primary concern for us. The cost of the automated products was comparable to or even less than the manual doors we had planned on using.

The hospital’s engineering staff served as a helpful resource for selecting an entry door to the cleanroom, given the numerous existing automatic sliding entry doors already installed in our medical center. Their input ensured that we chose a product that was cost-effective and easily maintained. Although we chose a different style of automated door than those used elsewhere in the hospital, we selected the same brand, to ensure volume-discounted pricing and uniform service arrangements.

We were fortunate to have Karl M. Kilgore of The CPI Group as our lead architect; we chose to work with him after reading his April 2008 article in Pharmacy Purchasing & Products magazine detailing how to design a cleanroom to meet USP <797> requirements. Karl was extremely knowledgeable about USP <797> requirements and fully aware of the workflow challenges these new standards present. For example, there were concerns about a lack of space in the cleanroom, so Karl revised the original plans to replace pass-through windows that swung open with automatic, bi-parting, sliding windows, which would take up less space. 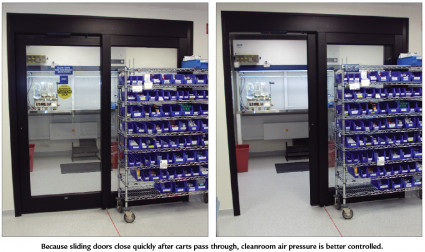 Click here to view a larger version of this photo.

Benefits of Hands-free Operation
Installing an automatic sliding entry door offers a number of benefits, most importantly hands-free operation, which prevents contamination of sterile gloves and makes both cart and foot passage easier. Medications can now be taken from the cleanroom to the anteroom without the need to set anything down, touch the door, or manually activate an opener. Because sliding doors close quickly after carts pass through, cleanroom air pressure is better controlled. Not only does the design save space, but an automatic sliding door also opens more widely into the central pharmacy than other types of entry doors, and can even be unlatched and swung completely open in the event of a power failure or malfunction. Finally, since the glass door provides a full, transparent view, the incidence of swinging door injuries when items are being rushed to delivery is nearly eliminated.

Tweaking the Initial Model
When the doors were first installed we found that they opened too frequently and remained open longer than necessary, since they originally were designed as outdoor entry doors used for customer convenience. The pass-through windows also tended to open too often—in fact, they opened any time a staff member walked within two or three feet of the window—which was problematic. Therefore, it was necessary to fine-tune the sensitivity of the entry doors and windows to meet the unique needs of a pharmacy cleanroom. During a service call, the technician made several adjustments and substitutions, including adding a sensor, and subsequently the door and windows functioned as we had intended.

In retrospect, it may have been simpler to purchase a sliding door and windows with sensors designed specifically for use indoors between rooms, such as the anteroom and cleanroom. Nonetheless, the supplier’s technician was able to replace the sensors to deliver the appropriate sensitivity level. Although the implementation may have been easier had we been able to find automated doors and windows intended specifically for the hospital pharmacy environment, we were able to adapt standard commercial products to suit our specific needs. 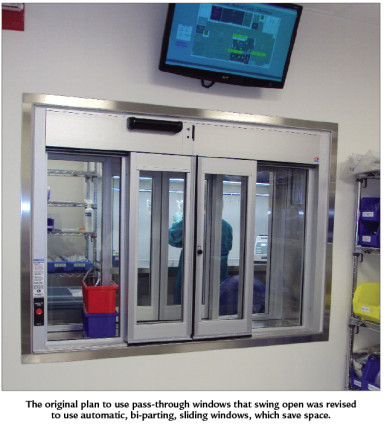 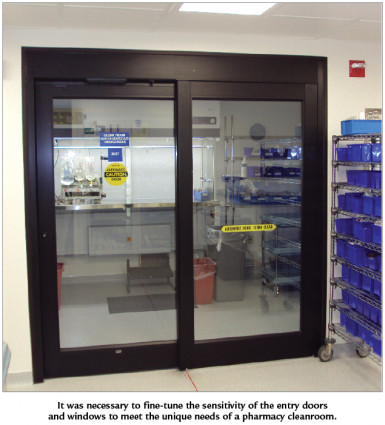 Meeting High Standards
This automation has aided in meeting the exacting cleanliness standards expected when compounding products aseptically in the cleanroom, while improving workflow, safety processes, and patient safety. The decision to install automatic doors and windows was an excellent choice for our facility. Notably, the change grew out of a staff member’s desire to improve workflow and safety processes; often the best suggestions are offered by engaged staff members who are most familiar with pharmacy processes. Pharmacy directors can help create a culture of participation and ownership by encouraging staff suggestions that  contribute to a safer and more efficient pharmacy operation.

Dennis DelaBarre, RPh, has served as the assistant director of pharmacy at St. Alexius Medical Center in Bismarck, North Dakota since 2002, and is responsible for directing and coordinating purchasing, staffing, and inventory management. Prior to joining St. Alexius, Dennis served as the director of pharmacy, materials management, and central supply at a 200-bed facility. He received his degree from North Dakota State University in 1974 and has been employed in hospital pharmacy since 1980. Dennis’ professional interests lie in data and systems analysis to improve efficiencies and medication safety, and to reduce costs. 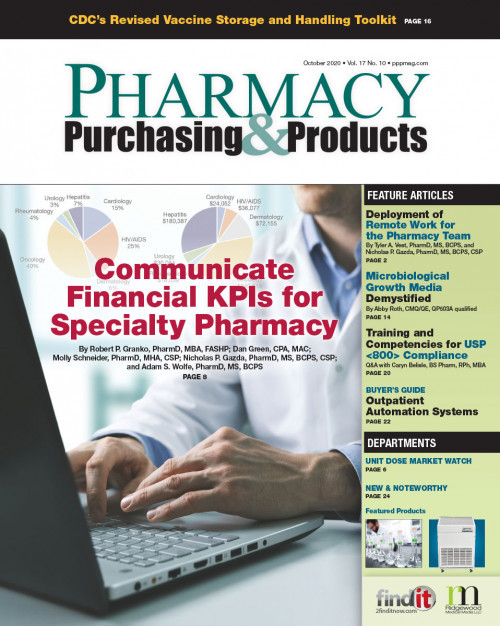