As is the case for most states, the South Carolina department of health, along with TJC, mandates standards regarding medication management, with each centering on an organization’s ability to safely prepare medications for its patients. As a result, the Regional Medical Center (RMC) of Orangeburg and Calhoun Counties—a 286-bed, acute-care medical center—tasked the pharmacy department with finding a flexible reconstitution and administration system that could not only fit into our overall USP <797> compliance plan, but could be used throughout the organization to deliver medications to our patients in the most efficient way possible.

In order to achieve this goal, we examined several drug reconstitution and delivery systems approved for use by the FDA for referral to our P&T committee and intended for use throughout the medical center and its clinics. One key element was to identify a system that could be used not only within the medical center’s cleanroom and pharmacy satellites to maximize the beyond-use dating (BUD) of the drugs provided in those locations, but also could be used in all treatment areas of the medical center by all appropriate personnel to mix and administer medications to patients. This element has quickly become a priority given the widespread drug shortages effecting care in our medical center and throughout the US.

Maintain Flexibility
After considering the features, compatibilities, and benefits of several systems, our clinical staff, in consultation with our medical director, narrowed its choice to the Vial2Bag system from West Pharmaceutical Services. In our trial of West’s system, it was noted that although it requires the stocking of three distinct parts (one spike and two different size vial adaptors), this was not a major issue for staff. We did discover an important compatibility function, in that the Vial2Bag spike can interface with a facility’s current IV bag of choice, as the system works with all manufacturers’ bags. Moreover, the Vial2Bag system accommodates liquid drug vials, but also allows for the attachment of syringes (without the use of a needle) to the main spike adaptor for maximum flexibility during bedside medication administration. 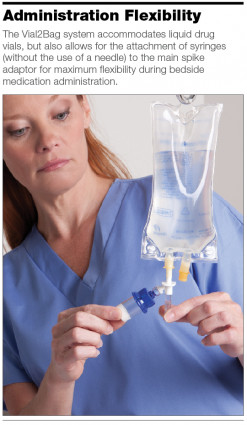 Drug Shortage Applications
In light of the impact of national and local drug shortages on all pharmacies, RMC has made a conscious effort to reduce drug waste and maximize the supply of any drugs that appear on shortage lists. Part of this organization-wide effort has been to maximize the BUDs of CSPs compounded in the main pharmacy, as well as to clarify, educate staff on, and maximize the use of proper applications of the immediate-use exemption within USP <797>. To enable this, the pharmacy engaged the assistance of a consultant pharmacist to conduct a situational (or gap) analysis of our compounding operations to address any deficiencies and to ensure our compounding methods and BUD determinations were in line with all prevailing standards from USP, the state board, and TJC.Furthermore, we examined our staff training resources and methods, and expanded our training library to include a revised immediate-use exemption policy that incorporated a competency assessment and return demonstration document to be sure that all personnel were comfortable and competent in the application and use of these devices.

Once the education documents were in order and the protocol was in place, we trained all relevant cleanroom personnel and floor staff and filed completion documents in each staff member’s in-service training record, per facility policy. The results for the pharmacy have been a reduction in drug waste and less frustration due to the ability of staff to better handle items that are on the drug shortage list. We also have noted increased satisfaction from nurses and physicians, since they are being asked to change fewer medication or treatment orders due to drug shortages.

Extending Benefits Beyond the Pharmacy
RMC, with the assistance of the pharmacy department, is now in the process of integrating the use of the Vial2Bag system into operating rooms and other diagnostic and treatment areas not included in the first phase of our integration plan. The unique elements of this system—namely, the ability to attach liquid drug vials and to connect syringes effortlessly to the IV bag—deliver flexibility, making it a good fit for our current practice.

Arthur Chaput, PharmD, is the director of pharmacy services at the Regional Medical Center of Orangeburg and Calhoun Counties in Orangeburg, South Carolina. He earned both his BS in pharmacy and his PharmD from the Massachusetts College of Pharmacy. Prior to his current role, Art was the director of pharmacy services at Marlborough Hospital in Marlborough, Massachusetts. Arthur also serves as the chairman of the Professional Affairs Committee for the South Carolina Pharmacists Association.