Register for our 10/22 Webinar: Training Pharmacy Technicians for USP <800> Compliance

Anticoagulation medications are more likely to cause patient harm than other medication classes due to their complex dosing, often insufficient monitoring, and inconsistent patient compliance. TJC’s NPSG 03.05.01 highlights the importance of robust anticoagulation education to effective medication management as a required element to reducing the possibility of patient harm. Implementing an anticoagulation therapy program that includes effective communication strategies and patient and family education will best ensure that patients understand how to take their prescriptions, thereby increasing medication compliance. The importance of follow-up monitoring to avert drug-food interactions and the potential for adverse drug reactions and interactions also are vital elements of any anticoagulation patient education program.

Oconee Medical Center is a 160-bed hospital in Seneca, South Carolina, employing 125 physicians representing 25 specialties. In 2007, pharmacy embarked on an effort to improve our anticoagulation program and better fulfill TJC’s NPSG, including efforts to improve communication and education of patients undergoing anticoagulation therapy. Pharmacy recognized challenges existed in ensuring patients were educated, as well as in documenting that this education had occurred. The goal of our project was to standardize education for all anticoagulants on formulary, thereby maximizing compliance and ensuring that all patients receive education on these high-risk, high-alert medications.

To meet the goal of standardized anticoagulant education, pharmacy adopted a lean A3 performance improvement process to increase education compliance and elevate the quality of education provided to patients. We determined that a bar code–driven approach to education would be the most efficacious solution within the pharmacy and the larger medical center.

Improving the Education Process
While an anticoagulation education program was initiated in 2007, this simply marked pharmacy’s onset in educating patients on appropriate warfarin therapy. It quickly became evident that our patient education efforts were lacking. By 2009, we recognized the need for a more robust program. Pharmacy began patient education compliance tracking in response to recommendations from the patient safety, pharmacy and therapeutics, and medical executive committees, which had identified room for improvement in the numbers of patients being educated and the effectiveness of the education provided.

Challenges to Compliance
Patient education on warfarin use had been inconsistent for a number of reasons. Early discharges prevented pharmacy from educating some patients before they left the medical center. Similarly, under our procedure, pharmacy obtained reports on warfarin orders the day after orders were entered, which meant that discharged patients and those with one-time prescriptions did not receive education. Moreover, reduced pharmacist staffing on weekends resulted in reduced compliance. Pharmacy also lacked a back-up process to identify patients who had not received timely education, and thus could not contact these patients. Finally, some patients were unable to understand the education that pharmacy was providing and required remediation.

In addition to the challenges we encountered with warfarin, weaknesses in the education process for other anticoagulants on formulary were resulting in noncompliance or missing documentation. Too many different staff members were delivering education and utilizing inconsistent methods. Pharmacy was educating most patients, but not consistently documenting that it had occurred. Nurse educators had not been trained to deliver education on anticoagulants other than warfarin, and did not work weekends, resulting in staffing challenges on Saturday and Sunday. In addition, our policies and procedures required updating; the educational parameters set by the medical center only required enoxaparin patients to receive education when their prescribed dose exceeded 50 mg. It also was determined that physicians rarely documented patient education. Further complicating our efforts, the medical center had in excess of 300 order forms in use, few with the same parameters, and International Normalized Ratio (INR) values were not consistently performed or monitored.

Implementing Lean A3 Methodology
To address these challenges, pharmacy applied lean A3 methodology, a highly structured strategy for problem analysis and performance improvement. We developed diagrams to organize complex information, communicate it efficiently and effectively, and keep the focus on systems, rather than individual people. To implement A3 methodology, the director of pharmacy, a clinical pharmacist, and the director of performance improvement formed a committee that also included pharmacy technicians, a coronary care unit/progressive care unit (CCU/PCU) nurse manager, a PCU nurse, an education nurse manager, a nurse educator, and a nurse informaticist.

The first step in the A3 approach is to define the current condition, which then serves as the basis for mapping corrective action. Our compliance rate for anticoagulant education was benchmarked at 56%. Confirmed data were as follows:

After gathering this data we sought to identify root causes of our challenges. We applied the 5 Whys strategy, a simple tool for drilling down through a problem to elucidate root causes. Our starting points for the drill-down process included questions such as: Why do we need to act to improve anticoagulant education? Why are we not educating 100% of patients? Why is patient education especially low on weekends? and Why are we missing education on one-time orders?

Once the answers to these questions were identified, we defined our target metrics for patient education on anticoagulant therapy and quantified the gap between the current and target states. Analysis of this gap allowed us to develop a plan to implement our new process. We undertook a solution-driven process that addressed the root causes of our challenges while supporting rapid experiments to evaluate the utility of various ideas. The plan ultimately defined all process improvement tasks, established a timeline with deadlines, and identified individual responsibilities.

The final steps of the A3 methodology were to develop a follow-up plan that included the specific mechanisms for measuring improvement, as well as a process for gathering and reviewing insights gleaned from the project, with the goal of identifying any shortcomings in the solution and developing plans to address them.

Building the Program
The initial change implemented was putting all anticoagulation medications on one order form (see Figure 1); the form was designed by a committee of pharmacists, patient educators, nurses, and physicians using lean A3 event analysis. Previously, numerous anticoagulant order forms were in use, and the committee believed that a single order form would best facilitate proper dosing, labs, and patient monitoring. 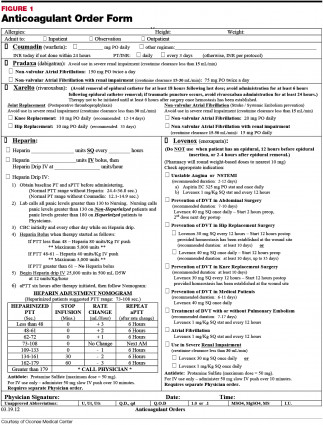 After implementing a single anticoagulant order form for all anticoagulation orders, some physicians were reluctant to use the new form. However, after the new form was automatically linked to the old forms, they quickly accepted the new, seamless process.

Education Cards
The development and implementation of patient education cards was the crux of our program’s success. An education card was created for each anticoagulant on formulary. Each card was written in lay terms to ensure that all patients receive clear, consistent information. The marketing department helped design the cards and formatted them for easy reproduction and distribution; four cards print at one time on a sheet of heavy, standard-size paper. To avoid waste and excess trimming, the cards were made exactly 5½” x 4¼” each, so four cards (front to back) fit on one page (see Figure 2). 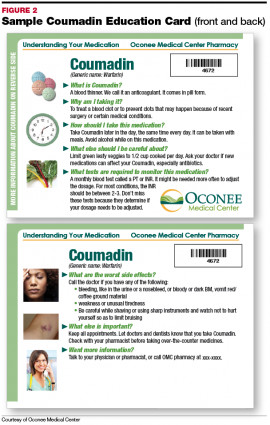 Pharmacy produces the cards, which are stored in the medication carousels in the pharmacy and then stocked in the ADCs on nursing units. When supplies get low on the nursing units, the cards are automatically reordered by the cabinet technology and populate on the medication carousels to be picked and replenished. The cards are bar coded by pharmacy and entered into the PIS as medications. We utilize a free online bar code program that generates a bar code once we enter a number; it is then affixed to the cards (www.barcodesinc.com/generator/index.php).

The benefit of this system is that medication and education are delivered simultaneously, and documentation is automatically generated. Education cards remain on patients’ profiles for seven days to avoid duplication of our education efforts.

Pharmacy Monitoring of INR
Another element of our solution was to give pharmacy prescriptive authority to order INRs. Pharmacy now consistently gathers and monitors INRs, meets daily with hospitalists to review any abnormal values, and contacts physicians to intervene when necessary. The exception to this process is the outpatient orthopedic area, which occasionally requires low INR as a prophylactic postoperatively.

Staff Training
A robust training program was key to a smooth implementation. The committee developed an online clinical practice model, available on the hospital’s intranet site, to educate staff; this training is mandatory. In addition, we also utilized slide presentations to educate staff, and ensured that process changes were presented to staff in the pharmacy newsletter. In addition, the director of pharmacy presented the new process in formal meetings to all medical staff departments. Finally, a policy and procedure delineating all steps of the process was developed specifically for anticoagulant education.

Expanding the Utility of Bar Code Systems
Given the large investment most hospitals have made in bar code systems, it makes sense to fully capitalize on the technology by expanding the utility of these systems to additional uses. Delivering and documenting patient education via the existing bar code system is an excellent way to improve efficiency and meet regulatory requirements. While some hospitals already have expanded their bar code programs beyond medication tracking to help manage the distribution of breast milk and supplies, for example, additional opportunities exist for efficiency expansion; admission packets could be bar coded to simplify inventory management and ensure distribution according to hospital policy. Bar code tracking would allow the facility to identify and rectify any variances in practice. Depending on the needs of the facility, other creative uses of existing bar code systems can be explored to add value to the greater health system.  Our plans are to use this proven method to educate our patients on other high-risk, problem prone medications.

Results
As of January 2013, our hospital-wide compliance rate for anticoagulant education is 99.04% (see online-only Figure 3. We are now confident that our patients are receiving the information they need to best understand the potential risks associated with anticoagulant therapies. The lean A3 approach was pivotal in enabling all areas to work together diligently to reach this target metric for patient education and safety. 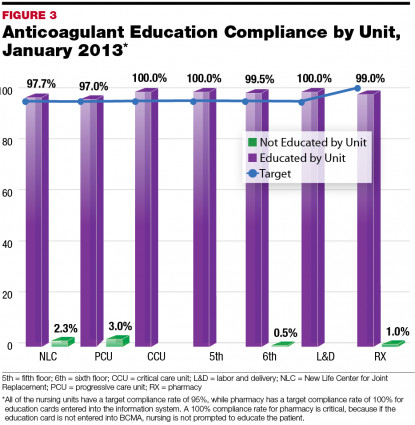 Staff members that experienced difficulty with adherence during the early days of implementation were re-educated, and compliance improved. Patient feedback has been positive, and hospital administration shares this feedback with the units to forge a clear connection between compliance with education and higher patient satisfaction ratings. Regulatory bodies also have responded positively, including the Centers for Medicare and Medicaid Services (CMS), the state board of pharmacy, and TJC. In fact, TJC requested a copy of our anticoagulant order set to share with other facilities and recognized the form as a best practice in managing anticoagulant therapies.

Pharmacy continues to monitor anticoagulation education compliance and reports regularly to the nursing units, as well as to the quality and safety committee. Pharmacy performance is also measured on a monthly basis to ensure continued success of the program. Future plans include integrating the new processes in our CPOE system, beginning in Q2 2013.

Bill Stevenson, BS Pharm, is the director of pharmacy services at Oconee Medical Center. His professional interests include the automation selection process and bar code point of care. Bill was awarded the South Carolina Society of Health-System Pharmacists Pharmacist of the Year in 2011.

Strategies for a Comprehensive Diversion Program