Implementing Automated Anesthesia Carts in the OR

Medication management in the surgical environment can be a complex process given the myriad diverse functions of pharmacy and surgical practitioners. While pharmacy’s primary responsibilities in this area include medication security, accountability, and accurate charge capture, most anesthesiologists emphasize easy access to vital medications and operational efficiency as keys to patient safety. Moreover, the nature of the surgical milieu—an isolated area staffed with independent practitioners and little pharmacy oversight—is replete with additional challenges. To ensure optimal patient care, proper inventory control, regulatory compliance, and fiscal responsibility, a balance between the needs of pharmacy and surgery must be sought.

Indiana University (IU) Health Bloomington Hospital is a 355-licensed bed, not-for-profit hospital utilizing a decentralized pharmacy distribution system. With an average daily census of 180, 14 surgical suites, and 26 anesthesiologists on staff, IU Health manages approximately 35 surgical cases each day. Ensuring appropriate medication use in the OR is an enduring, institution-backed objective and automating the drug management process has become a leading priority as new, robust technology has been developed in recent years.

Evolution of OR Medication Management
Supply Cabinets
Prior to 1998, IU Health Bloomington Hospital stocked medications in cabinets in the supply room of the surgery department. This approach failed to address several challenges, the foremost being proper security, charge capture accuracy, and regulatory compliance. In 1998, the drug cabinets were removed and replaced with a medication tray-per-case system; over 100 trays were kept on hand, with 30 to 40 restocked daily. This change resulted in a significant improvement to charge capture and better security, because trays were returned to the pharmacy for reconciliation. However, controlled substances were still locked in a cabinet in a central location, signed out by the anesthesiologist or the scrub nurse in the morning, and stored in fanny packs for use throughout the day; unused medications were supposed to be returned at the end of the shift. Adding to this concern, multi-dose controlled substance vials were typically used for several patients, complicating medication reconciliation and charging. This system remained in place for nearly 10 years until the implementation of ADCs.

ADCs
In an effort to continue to improve medication safety, security, and charge capture, two ADCs were installed in central surgical locations in 2007. Implementation of ADCs signaled a vast improvement to the OR’s existing medication management process. Because they were installed in the hallway and not within the surgical suite, however, nurses had to leave the OR to obtain medications, rendering the process inconvenient during procedures. To mitigate this inconvenience, anesthesiologists  frequently removed medications for multiple patients in the morning and also requested kits containing multiple dose controlled substances personalized to their practice requirements. Thus, sufficient medication accountability and accurate charge capture remained elusive.

Automated Anesthesia Carts
Seeking a more secure overall solution, in 2010 IU Health Bloomington Hospital organized a multidisciplinary team—including an anesthesiology nurse, OR pharmacy technician, pharmacy IT coordinator, the director of surgery, and the pharmacy manager—to prepare a pilot study to gauge the impact of implementing three automated anesthesia carts in the surgical area (see Table 1). Three anesthesiologists also were recruited to participate in the pilot, which took place over a period of six weeks. 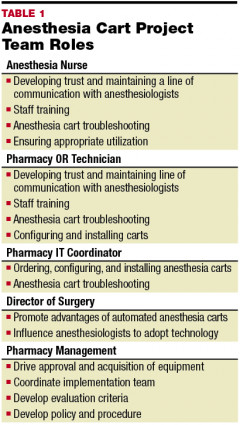 The vendor provided our users with initial training and education to help ensure as seamless a transition as possible. Anesthesiologists, nurses, and pharmacists who participated in the study completed written evaluations at the end of the six-week period. Evaluation criteria for anesthesiologists included ease of access to medications and supplies, emergency access to medications, quantity and location of medications and supplies, impact on workflow and efficiency, and user friendliness. Nursing evaluated the carts based on the efficiency of nursing workflow, controlled substance wasting, and surgical suite turnover. Pharmacy’s main evaluation considerations included the number of controlled substance discrepancies, time investment required to resolve discrepancies, restocking time, charge verification time, and number of stock-outs. Anesthesiology, nursing, and pharmacy feedback from the pilot study was generally positive, and after minor tweaks to the configuration of the storage compartments in the carts to suit our specific needs, the decision was made to move forward with full implementation of automated anesthesia carts.

Project Funding
Securing financing for purchasing the automated anesthesia carts began with the development of a product proposal. Our proposal included an estimated ROI that focused largely on the expected time savings that would be realized, as well as the regulatory compliance benefits. The results of the pilot study suggested that an automated anesthesia cart would be required in every surgical suite, thus the proposal suggested the acquisition of an additional 11 carts (for a total of 14) to ensure efficiency and standardization in each OR. Of note, due to a switch in medication distribution models from centralized to decentralized that took place around the same time, we were left with a unit dose packaging machine we no longer needed. Because the packaging machine was acquired from the same vendor as the automated anesthesia carts, we were able to leverage our vendor to return that technology in partial payment for the anesthesia carts.

Our proposal was ultimately approved by administration and 11 additional carts, equipped with label printers, were ordered in March 2011 and installed in each of the remaining surgical suites. Steps to complete the full implementation included building the utilization database, testing the functionality, stocking the carts, training all users, and providing go-live and ongoing user support.

Keys to a Successful Adoption
Designating project stakeholder champions and advocating for how the new technology will improve processes and alleviate frustration is central to gaining practitioner buy-in. Early on, we experienced significant resistance to process change from some anesthesiologists, so we felt it was critical to involve them during the pilot stages and early rollout. It is imperative to focus on the benefits of this technology to anesthesiologists, not the least of which is faster and more convenient access to OR medications. Likewise, it is important that pharmacy not be viewed as forcing this change. During our pilot study, some of the anesthesiologists who had not been initially involved heard about the benefits of the carts and expressed interest in participating. We realized that emphasizing the user benefits of this technology during the pilot stage not only helped ensure buy-in from the pilot users, but it also hastened the acceptance of automated anesthesia carts throughout the anesthesiology and surgical departments.

Careful preplanning and completion of the pilot study prior to putting forth the acquisition proposal was key to the success of our automated anesthesia cart project. After exploring the technology in the initial weeks of the pilot phase, the benefits for anesthesiologists became apparent and users were able to compare the old workflow against the new, and witness the benefits of embracing change. The pilot also gave us the opportunity to optimize cart contents based on feedback and consensus, and adjust as necessary prior to go-live. We made it clear to the anesthesiologists participating in the pilot that the previous ADC and medication tray process was still viable in case there was an issue with the automated anesthesia carts. During the pilot, we kept three to five backup trays available at all times, kept the ADCs in the central OR fully stocked, and placed an override key on the automated anesthesia carts to allow emergency access to medications in the event of a power outage.

Organizing and soliciting input from the multidisciplinary team also was a key element in our successful switch to using the automated anesthesia carts. Involving nursing, anesthesiology, information technology, and pharmacy helps ensure that every department handling and utilizing OR drugs understands the reasons for the change and can drive acceptance within their individual departments.

Last of all, emphasizing appropriate and comprehensive training was another important component of our success. The majority of this education occurred one-on-one with each individual anesthesiologist. Typically, the anesthesia nurse and the OR pharmacy technician educated each anesthesiologist separately in the morning, explaining the drawer configuration—which we designed to closely resemble the case trays they were used to—and providing detailed information about the carts’ functionality. Because the carts so closely resembled the trays, little additional training was required (see Figure 1). In addition, each cart is organized identically so the anesthesiologist can be certain that each anesthesia cart will be the same no matter which OR suite they are working in. Our anesthesiologists appreciate this standardization, as no learning curve is necessary from room to room. 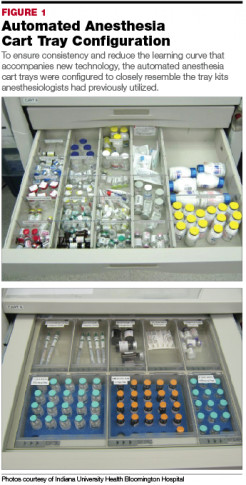 Implementation Results
To date, the most significant benefits of implementing automated carts in the ORs have been the convenience of having quick access to medications during procedures; improved security and accountability of all medications, especially controlled substances; less time spent reconciling controlled substance discrepancies; less time spent restocking; and improved charge capture (see Table 2).

> Access to Medications
Before we implemented the automated anesthesia carts, the limited number and central location of OR medication ADCs prompted anesthesiologists to dispense drugs for multiple patients at one time and to hoard medications in various caches to prevent multiple trips to the ADCs. Because each surgical suite now has an anesthesia cart that houses 95% of all required OR medications, these challenges have disappeared.

> Security and Accountability of Medications
Before implementation of the automated anesthesia carts, medication security and accountability was a continual concern. For example, it was common for multi-dose vials of midazolam and fentanyl to be used for multiple patients throughout the day. Reconciling medication amounts dispensed with amounts administered took pharmacy almost two hours each day, and approximately 10 discrepancies occurred each week.

Implementation of the anesthesia carts eliminated the need for multi-dose vials and this resolved the majority of discrepancies. Medications are now dispensed for each case individually and unused drugs are wasted at the end of the case. Medication security also has improved, as drugs are no longer inadvertently left in fanny packs or taken home. Moreover, while it is not possible to completely eliminate the possibility of drug diversion, the anesthesia carts make diversion more visible. Our OR pharmacy technician audits controlled substance dispenses and waste against the written anesthesia record and reports any discrepancies to the pharmacy manager for follow-up.

> Charge Capture
Charging medications from trays required about one to two hours each day. The process also was error prone, as the handwritten anesthesia record was unreliable and difficult to read. Because the anesthesia carts automatically charge medications upon dispense, there is no need for interpreting a handwritten record and medication charges are recorded correctly.

Future Goals
Implementing automated anesthesia carts in our ORs has improved access to anesthesia medications, improved OR workflow, heightened medication security and accountability, reduced medication reconciliation and restocking time, and improved charge capture. In future years, IU Health Bloomington Hospital expects OR medication management to continue to evolve. We are considering the future development of an OR satellite pharmacy, and continue to look for ways to improve our processes.

Jenna Smith, CPhT, is an OR pharmacy technician at IU Health Bloomington Hospital.

Clint Harrison, CPhT, is the pharmacy IT coordinator at IU Health Bloomington Hospital.