Management of Oncolytic Viruses in the Pharmacy

Medical researchers have long known that certain viruses can cause cancer, while others have the potential to treat cancer.1,2  These converse viral functions are known by two similar, yet different terms; the former type—oncoviruses—are viruses that can cause cancer. Examples of oncoviruses include hepatitis B and C viruses, Epstein-Barr virus, and human papilloma virus (HPV). The second type—oncolytic viruses (also known as viral vaccines or gene therapies utilizing viral vectors)—are being investigated for use in treating some forms of cancer. Examples of oncolytic viruses include Seneca Valley virus, JX-594 (recombinant vaccinia virus), vesicular stomatitis virus, and reovirus.1 While studies have shown that exposure to oncolytic viruses can result in tumor regression, it was not until the advent of genetic engineering—which allowed a virus to be manipulated rendering it nonpathogenic—that the possibilities of using viruses as therapeutic agents became possible.

As the proliferation of studies and research into the effects of oncolytic viruses on cancer continues, hospital pharmacists will increasingly have to negotiate the hurdles inherent in the handling of virus-derived cancer treatments as medications.

Challenges of Oncolytic Virus Management
While many hospital pharmacies are equipped to handle hazardous drugs, oncolytic virus and viral-derived drugs present a different set of challenges for pharmacists. Opportunities for viral contamination of other intravenous products and pharmacy personnel exposure should generate real concern. For example, case reports have described the incident and effect of cross-contamination of bacille Calmette-Guérin (BCG)—a tuberculosis vaccine—with intrathecal chemotherapy administered to immunocompromised patients resulting in the development of bacillus meningitis.3 As with all hazardous medications, there also may be an exposure risk for nurses, caregivers, environmental services staff, and any other person that comes into direct contact with a patient receiving viral therapy.

Currently, most researchers and sponsors consider the exposure risk to be minimal, either because the viruses themselves are ubiquitous and most people are likely to have had exposure to them, or because the viruses are genetically engineered to no longer be capable of causing infection or of spreading in normal cells. Although there have been no reports of viral infection due to a health care worker becoming exposed to viral products used in cancer treatments to date, measures must be taken to ensure this trend is maintained.

Handling and Preparation
Fundamentally, pharmacists should handle oncolytic viruses as they would hazardous drugs. According to a 2004 NIOSH alert, hazardous drugs are identiﬁed as conforming to at least one of the following six criteria: carcinogenicity, teratogenicity or developmental toxicity, reproductive toxicity in humans, organ toxicity at low doses in humans or animals, genotoxicity, or new drugs that mimic existing hazardous drugs in structure or toxicity.4 While many viral products do not have extensive data on toxicity due to exposure, handling oncolytic virus agents as hazardous drugs will minimize the risk of exposure and therefore minimize the risk of toxicity.

Likewise, oncolytic viruses should be prepared according to the same policies the pharmacy uses for other hazardous and/or investigational drugs (IDs). At Smilow Cancer Hospital at Yale-New Haven—a facility dedicated to interdisciplinary cancer research in basic science, translational research, and prevention and control—we mix BCG vaccines, as well as any other investigational virus drugs, in a designated vertical flow biologic safety cabinet with required decontamination and cleaning before and after the BCG preparation as described in the specific agent’s handling protocol, investigator’s brochure, or pharmacy manual. We do not allow intrathecal medications to be mixed in the same hood; rather, we have designated one vertical flow hood (we currently have six in our mixing area) to mix all intrathecal preparations and have barred any investigational drug product from being mixed in that hood.

For smaller pharmacies that may not have the ability to operate designated hoods, any viral products should be mixed separately from other preparations. In this case, protocols should be put into place mandating the cleaning and decontaminating of the biological safety cabinet after preparation of viral based products and before the start of preparation of other products. Every set of policies and procedures (P&Ps) for viral preparation should include a decontamination process, which should be included in the ID’s overall handling protocol, and if it is not part of the protocol, the pharmacy should request the process from the manufacturer. To enable proper cleaning, the pharmacy should have all necessary products on hand to decontaminate the work area after preparation of the viral product and to decontaminate any spill, and be certain that a rigorous training and education program is in place to maintain this process.

Investigational Classification
In addition to the hazardous drug safety precautions that should be taken, because almost all oncolytic viral products are currently classified as investigational, they also should be managed as other IDs would be. (See TABLE 1 for a sampling of current clinical trials using oncolytic viruses in the treatment of specific cancer tumors.5) 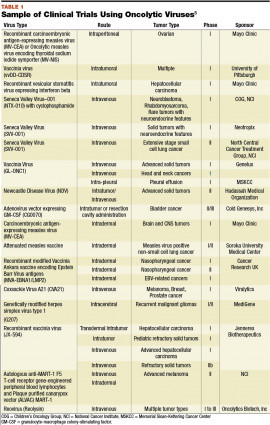 The protocol for managing an ID should outline the proper documentation for receipt and storage of the products. Furthermore, all personnel handling these products must use proper personal protection equipment (PPE) at all times. As with other hazardous drugs, shipment-handling (loading dock) personnel should wear gloves, at minimum, as they unpack shipping cartons containing investigational viruses, and may consider using chemotherapy gowns and masks, depending on the assumed virulence of the product. Considering that chemotherapy residue has been detected on the outside of chemotherapy vials and cartons,6 there is compelling reason to believe the same could be true with viral based products. Storage of the products may be difficult for some pharmacies, as a few of these products, such as reoviruses, need to be stored in frozen conditions, including some at -80°C.

Oncolytic Virus Administration
For the administration of oncolytic virus therapies, pharmacy and nursing personnel must be instructed to handle viral products under the same precautions used with chemotherapy and other hazardous drug administration, plus any extra precautions required by individual product protocols. In some cases, it may be prudent to separate patients receiving viral agents from patients that are severely immunosuppressed in order to prevent any unintended infection from the viral agents and to mitigate the risk of treating the wrong patient with the wrong product. In addition, being aware of the symptoms associated with earlier clinical trials or with infection due to the native virus will help in monitoring for possible exposure. In the event of an investigational oncolytic virus becoming FDA approved for commercial availability, the manufacturer will be required to list any necessary precautions in product handling, and these should be adapted to the pharmacy’s internal P&Ps. While it is not yet clear what the FDA will require for the labeling of viral products, health care organizations should continue to advocate that handling and decontamination processes be part of the label.

Conclusion
Oncolytic viruses offer an exciting and potentially effective method for treating certain types of cancer, and it is quite likely that at least one oncolytic virus product will receive FDA approval and be routinely used in the treatment of cancer in the United States within the next five years. As these products continue to show efficacy in phase II and phase III trials, oncology pharmacies should begin to prepare now for the complexities of handling viral products. 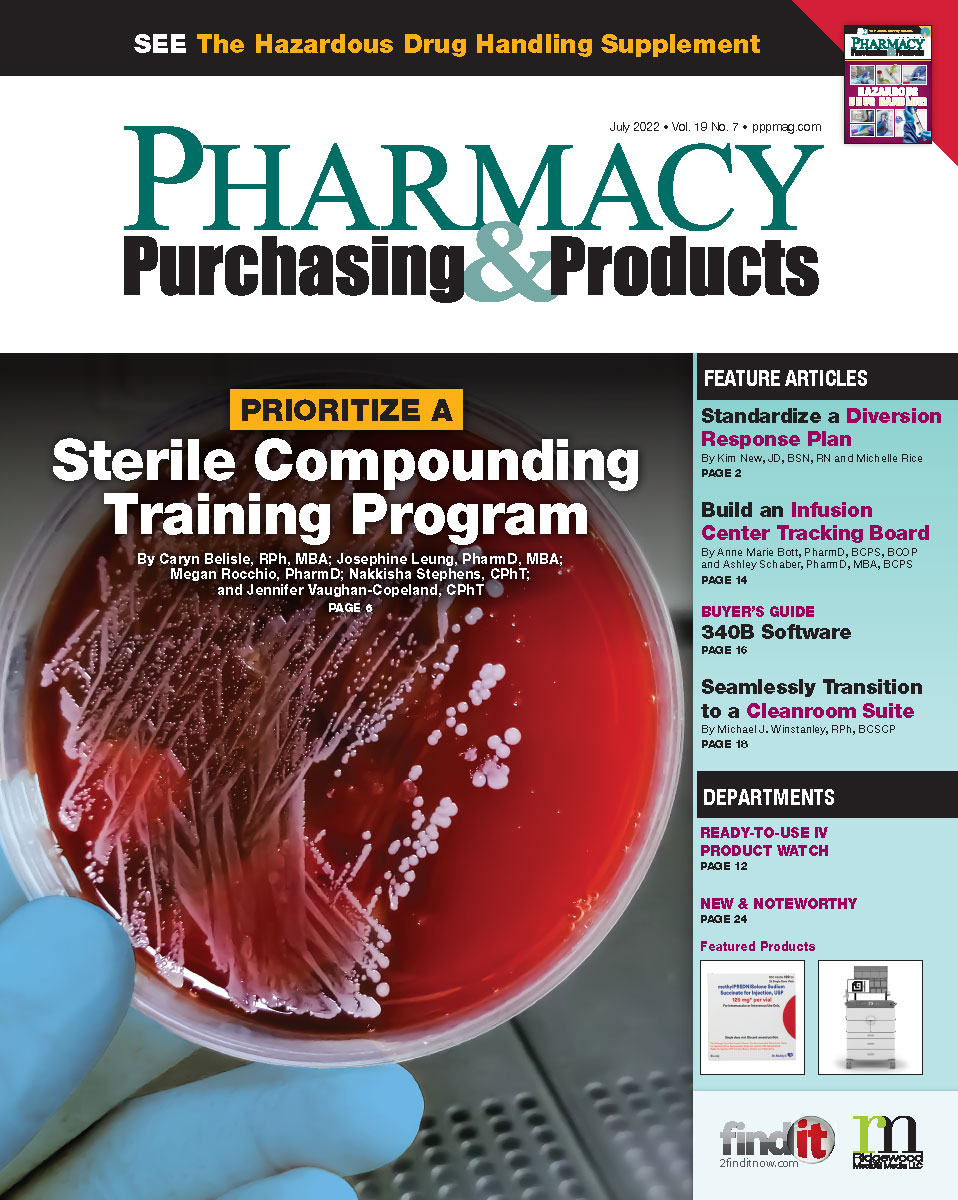