Controlling medication inventory within the central pharmacy has its own challenges, but these challenges are amplified once medications leave the pharmacy. At Sinai Hospital of Baltimore, part of LifeBridge Health, we utilize automated dispensing cabinets on each of the nursing units, including the ED, and have implemented Aethon TUG robots and MedEx software to manage the delivery and tracking of medications to the inpatient units. However, our medication delivery process via pneumatic tube system made tracking medications challenging, and we needed a solution to improve patient care.

For over a decade, Sinai Hospital has relied on a pneumatic tube system to transport all medications to the ED to achieve rapid turnaround times. Ensuring timely, accurate delivery is key, given that our ED sees over 80,000 visits each year. Medications are sent from the main pharmacy to seven different pods within the ED: trauma, fast track, chest pain, pediatrics, urgent care, psychiatry, and a rapid evaluation unit.

Previously, when medications were sent through the pneumatic tube, there was no system in place to track where the medications went or who received them; this resulted in patient care delays, lost capital, and wasted time. Often, nurses would never receive the medications sent from the pharmacy and the dispensing process would have to be repeated all over again. High volume and rapid movement of patients only added to the system’s dysfunction. In order to close the holes in our pneumatic tube system, we needed a new procedure to improve medication tracking.

Implementing New Technology
In September 2013, Sinai was approached by Aethon to pilot their newest technology, TubeTrack. We were excited to implement technology to improve the tracking process of tubed medications. By November, Sinai Hospital implemented Aethon’s TubeTrack technology in the ED. TubeTrack interfaces with the Aethon TUG robot system and MedEx software that our hospital had implemented previously. The system allows us to track each step in the process of dispensing medications from the time a pharmacist verifies a medication to the time of delivery into the nurse’s hands. 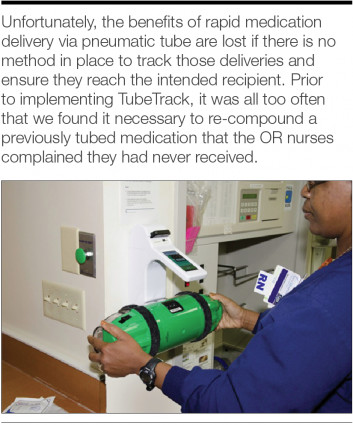 Technology as a Solution
The implementation and utilization of TubeTrack is a simple process requiring minimal training. We developed a short PowerPoint presentation for staff and Aethon was present to do one-on-one training during the first week of implementation. We obtained buy-in from our nursing leadership and worked with our IT department on the installation of wall-mounted devices in the ED. The security department also played a role by obtaining input information from our badge system, which is used by the nurse to quickly log-in to TubeTrack at the tube station.

The process begins once the medication is prepared and checked by the pharmacist. For medications slated for the ED, the pharmacy technician scans the specially modified pneumatic tube using the TubeTrack scanner at the tube station, and is then given a three-digit code to unlock the tube. Each medication is scanned using the pharmacy system label bar code. This provides a visual confirmation of each medication. The scanned medications are then placed in the tube, and the tube is locked. The tube is sent to its designated location in the ED, where each tube station is equipped with a wall-mounted device. To remove the medications from the tube, the nurse must scan their ID badge to log-in and then scan the bar code on the tube to reveal the three-digit code that unlocks the tube. Once the tube is unlocked, the nurse can retrieve the medication.

Benefits and Future Goals
In the short time since the implementation of the system we have already seen benefits. One of the most significant improvements is increased transparency throughout the pneumatic tube medication transport process. During each step of the process, TubeTrack sends a message to the MedEx software, allowing pharmacy personnel and nursing staff to locate the medication. The system specifies who loaded the medication into the tube for each individual patient and which nurse removed the medication at the point of delivery. Utilizing the wall-mounted scanning device, nurses can easily view the history of medications retrieved in the ED, including who withdrew them from the tubes. Furthermore, the pharmacy can now track the total turnaround time of the medication process, allowing us to determine if we are meeting our goals for efficiency and patient safety.

Within the first few days of implementation, the pharmacy experienced fewer phone calls from the ED attempting to locate missing medications. TubeTrack has improved accountability in the pharmacy and ED, and has received favorable reviews from both nursing and pharmacy. Moving forward, we plan to expand TubeTrack to our critical care areas and our pediatric hospital to further increase efficiency, reduce waste, and improve the patient experience.

Lisa Polinsky, RPh, MBA, is the director of pharmacy at LifeBridge Health in Baltimore, Maryland. She received her bachelors degree in pharmacy from Duquesne University and her masters in business administration at Loyola University of Maryland. Lisa previously served as the pharmacy operations manager at Sinai Hospital for seven years.