Each year, approximately eight million US health care workers are potentially exposed to hazardous drugs (HDs).1 The subject of worker exposure to HDs (ie, chemotherapy, antineoplastics, cytotoxics, etc) has been discussed since the early 1970s, when chemotherapy was mixed on countertops or in horizontal laminar airflow workbenches that blew HD-contaminated air into the room, directly at compounding personnel. In 2004, the National Institute of Occupational Safety and Health (NIOSH) published the NIOSH Alert, Preventing Occupational Exposures to Antineoplastic and Other Hazardous Drugs in Health Care Settings, 11 months after the publication of the 2004 version of USP Chapter <797>. In the 2008 revision of USP Chapter <797>, a specific section was devoted to the preparation of hazardous drugs, which defined several key requirements, including2:

These requirements are limited, however, as they do not address the full scope of HD exposure. Not all HDs are sterile; as such, the hazards of non-sterile compounding require delineation as well.

An important strategy to minimize occupational exposure to HDs is to ensure containment to as low a limit as reasonably achievable (ALARA). The concept of ALARA, a radiation safety principle, can be borrowed for use related to HD containment. As defined in Title 10, Section 20.1003 of the Code of Federal Regulations (10 CFR 20.1003),

By replacing the references to radiation and nuclear energy with the term HDs, the ALARA principle accurately explains the essence of proposed chapter <800>. Adopting the strategies laid out in USP <800> will enable hospitals to ensure that health care workers manipulating HDs are exposed only to amounts of contamination in line with the concept of ALARA.

Understanding Hazardous Drug Exposure
Since the first reported HD exposures, one of the roadblocks to achieving HD safety compliance has been the lack of documented evidence that HDs cause harm to health care workers. There is no clear, reportable number of deaths of health care workers who have developed cancer as a result of handling HDs at the workplace; few registries exist in the US that track employment, cancer outcomes, or reproductive outcomes of health care workers exposed to HDs, so accurate counts remain elusive. While to date there is no conclusive proof of the link between HD exposure and cancer in health care workers, the data on reproductive risk, notable biological marker effects, and recent specific chromosomal aberrations is too much to ignore.

In 2010, an investigative reporter, Carol Smith, endeavored to put a human face on the problem by recounting the tribulations of Sue Crump, a Seattle-area pharmacist who died at age 55 of pancreatic cancer.5 The reporter chronicled Crump’s experience mixing chemotherapy in hospital settings, which Crump believed was a causative factor in her cancer. The impact of this report resulted in the Washington State legislature passing two HD rules in 2012, one detailing handling requirements and the other requiring a registry to track workers who handle HDs and adverse events they had experienced.6,7 Certainly this is a positive development, and underscores the need for additional resources to track occupational exposure and cancer throughout the US.

Also in 2010, two important studies were published in the Journal of Occupational and Environmental Medicine. The first study, partially funded by NIOSH, evaluated antineoplastic drug exposure of health care workers at three university-based US health care centers, and reported continuing surface contamination in pharmacy and nursing areas despite HD handling guidelines.8 The second study reported damage to health care workers’ chromosomes that are linked to secondary cancers in treated patients, specifically tAML (acute myeloid leukemia with gene translocation) and tMDS (myelodysplastic syndromes with gene translocation).9 These studies prompted NIOSH, OSHA, and TJC to jointly draft a letter discussing the safe use of HDs, which was sent on April 8, 2011 to all US hospitals.10 Its message was to remind hospital and health care employers that HDs, such as antineoplastic drugs, pose serious health risks to workers when proper handling precautions are not followed.

NIOSH Hazardous Drug Handling Guidance
After the 2010 article on pharmacist Sue Crump was published, OSHA noted, “Although this is an important safety and health issue, OSHA has not considered a standard to specifically address hazardous drugs in the health care setting.”5 In fact, OSHA has not addressed this topic since posting their 1995 HD handling guidance document to the Web in 1999.11,12 Although many hospital leaders rely on the OSHA Web site for information on HDs in the workplace, the site contains little information detailing surface contamination studies and no information on the use of CSTDs.

Many states operate their own OSHA programs, and some states are following Washington’s lead in this effort. Maryland13 and North Carolina14 have action in progress, and California passed an HD bill in October 2013.15 However, because state OSHA initiatives all vary somewhat, state rules may not ensure the consistency of practice standards necessary to effectively deal with the problem of HD exposure in the health care setting.

Hundreds of studies have been published discussing HD exposure since the 2004 NIOSH Alert. The NIOSH Web site maintains a list of all the studies related to HD exposure (available at http://www.cdc.gov/niosh/topics/antineoplastic/pubs.html).

While limited evidence exists in the literature concerning occupational cancer related to antineoplastic agents,16 adverse effects on fertility and reproductive health continue to be identified in a number of studies, mainly in female nurses.17 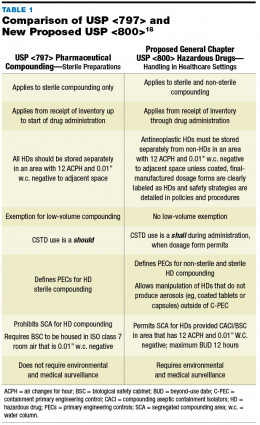 Summary
Exposure to HDs, both directly and indirectly, is an occupational hazard for a large number of health care workers, and it is vital that everyone who is at risk educate themselves about Chapter <800> and the actions they can take to protect themselves. Do the strategies detailed in the new proposed chapter reduce exposures to HDs as low as reasonably achievable? To weigh in, please visit the USP Web site to download and read the proposed chapter. This is your opportunity to submit feedback and constructive suggestions to the expert committee to help strengthen the chapter and properly protect yourself and your colleagues from contamination.

Luci A. Power, MS, RPh, is an independent lecturer and consultant on pharmacy IV and hazardous drug systems. For over 25 years, she was with the department of pharmaceutical services at the University of California Medical Center in San Francisco, serving in various capacities. Luci is a primary author of both the 1985 and 1990 ASHP Technical Assistance Bulletins on Handling Cytotoxic and Hazardous Drugs, lead author of the 2006 ASHP Guidelines on Handling Hazardous Drugs, and first author of the ASHP Safe Handling of Hazardous Drugs Video Training Program. Luci is an original member of the National Institute for Occupational Safety and Health (NIOSH) working group on hazardous drugs and an author of the 2004 NIOSH Alert: Preventing Occupational Exposures to Antineoplastics and Other Hazardous Drugs in Health Care Settings. She is also a Compounding with Hazardous Drugs Expert Panel member.

Eric S. Kastango, MBA, RPh, FASHP, is the president, CEO, and owner of Clinical IQ, LLC, a provider of customized process and educational strategies for the pharmaceutical, medical device, and health care industries. A member of the USP’s Compounding Expert Committee from 2005 to 2012, Eric now serves as an Expert Consultant on the USP Council of Experts and a member of the Compounding with Hazardous Drugs Expert Panel.

Kate Douglass, MS, RN, APN,C, CRNI, is vice president of CriticalPoint, a health care training and development company. She is one of the 2014 USP <797> Compliance Study co-directors. Kate has personally supervised the design, engineering, and build of several pharmacy compounding facilities that met or exceeded USP requirements and is on the faculty of CriticalPoint’s Sterile Compounding Boot Camp.

Patricia C. Kienle, RPh, MPA, FASHP, an employee of Cardinal Health since 1999, currently serves as the director of accreditation and medication safety. She is the recipient of an MPA in health service administration from Marywood College in Scranton, Pennsylvania, a BSc in pharmacy from Philadelphia College of Pharmacy and Science, and has completed an executive fellowship in patient safety from Virginia Commonwealth University. She is a member of the USP Compounding Committee and chair of the Hazardous Drug Subcommittee and Expert Panel, though her comments here are her own and not official information from USP. Patti is also an adjunct associate professor at Wilkes University in Wilkes-Barre, Pennsylvania.