Until the late 1960s, nurses and physicians commonly prepared IV doses on the nursing unit or in the surgical suite, without cleanrooms or special equipment, and with little regard for aseptic technique. This changed when sterile compounding became a pharmacy responsibility; hospital pharmacies installed laminar airflow hoods and incorporated principles of aseptic technique into the preparation of compounded sterile preparations (CSPs). Currently, the most widespread method of preparing and verifying CSPs is the manual syringe-pullback method, wherein the pharmacy technician prepares the CSP and pulls back the syringe to indicate the volume of drug injected into the bag, and then the pharmacist verifies the medication (see PHOTO 1). However, this process for preparing and verifying CSPs is prone to error, as it relies solely on human vigilance to ensure accuracy. 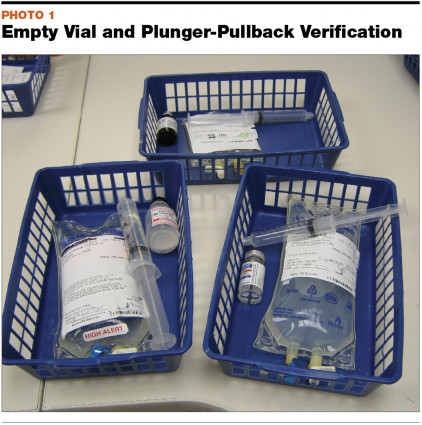 Scanning bar codes as a means of product identification was introduced in the early 1950s. By  the late 1990s, bar code scanning was incorporated into the medication administration process. Currently, about 75% of hospitals employ BCMA.1 But BCMA cannot detect upstream errors—those made during compounding in the pharmacy. Once a product is removed from the manufacturer’s container and mixed with other ingredients, it is no longer identifiable. Verification must occur before the dose is mixed.

Several studies have examined IV admixture error rates and found that 1.6% to 9% of doses involve error.2-4 Fatal IV room mixing errors have made national news, including one incident in Ohio involving a mix-up with concentrated sodium chloride that resulted in the death of a two-year-old girl,5,6 and a heparin mixing error in Texas resulted in two infants dying.7 Clearly, an improved bar-coded medication preparation (BCMP) process is required to ensure medication safety.

Implementing a Bar-Coded Medication Preparation System
Indiana University Health Bloomington Hospital (IUHBH) is a not-for-profitcommunity hospital with 355 licensed beds and an average daily census of 180. IUHBH first studied BCMP in 2009 and was immediately interested in its potential to prevent sterile compounding errors. A small group of pharmacy managers, technicians, and pharmacists evaluated available systems on safety, ease of use, and cost. We drafted a project charter, including project overview, scope, goals and objectives, and return on investment (ROI). Our project proposal included an initial ROI estimate of $54,000 annually. Of this, we calculated that approximately $46,800 would derive from preventing errors resulting in patient harm, and $7,200 would reflect savings in prevented waste.

The pharmacy installed a BCMP system in November 2010 to improve the accuracy of our sterile compounding process and help eliminate IV mixing errors in the pharmacy. Although we put all of our compounded sterile doses through the system, our primary focus was to ensure the accuracy of chemotherapy doses. We currently use the system to process 435 doses per day, including 180 CSPs, 240 ready-to-use doses, and 15 chemotherapy doses. In the past two years, we have expanded BCMP to include pediatric oral syringes and nonsterile compounding of oral liquids that are not commercially available.

BCMP systems incorporate workflow queues to organize and prioritize doses. They also include compounding instructions to help standardize preparation. Drug, diluent, and fluid bar codes are scanned prior to mixing to ensure the accuracy of the ingredients (see PHOTO 2). Preparation cannot be completed if an incorrect ingredient is scanned (see PHOTO 3). In addition, digital images of key steps are captured during the compounding process. The pharmacist uses these images to verify the correct ingredients and volumes of IV doses remotely (see PHOTO 4). 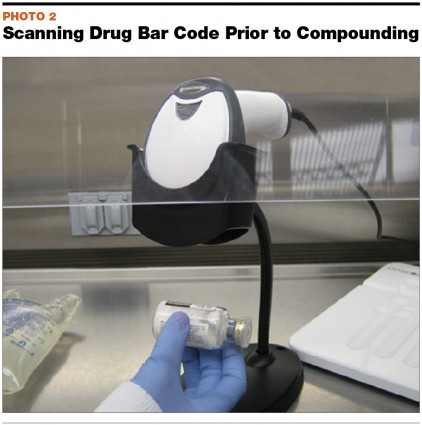 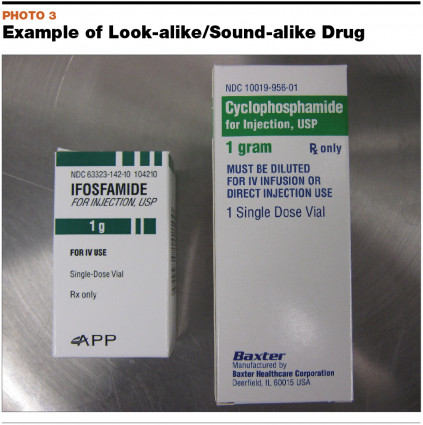 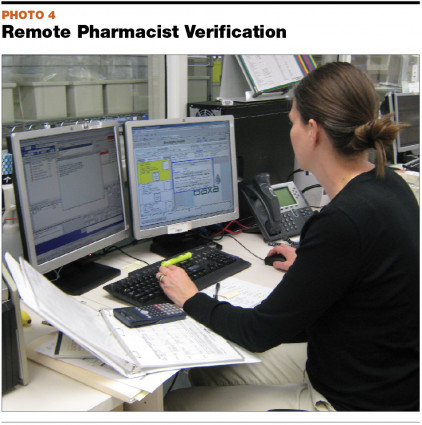 Benefits of a BCMP System
Intercepting Errors
Scanning an incorrect drug or diluent in the BCMP system triggers a hard stop alert, which is logged electronically and is reportable. During the first full year using the system, we intercepted 28 chemotherapy errors. In the second and third years, we prevented 20 and 17 errors, respectively. The percentage of intercepted errors has dropped from 1.5% to 0.8% of doses processed. Over half of the intercepted errors involved the wrong diluent or carrier fluid, 23% involved the wrong drug (see TABLE 1), 12% involved the wrong amount of drug, and 6% were prepared incorrectly (see FIGURE 1). Factors that play the greatest role in reducing intercepted errors include familiarity with the system, appropriate storage and labeling, and designating a chemotherapy technician to prepare all doses. Prior to installing BCMP, we were unaware of how many mixing errors we were making; we knew errors were occurring, but our attempts to log them on paper were unsuccessful.

Reduced Turnaround Time
In addition to ensuring accurate preparation, it is important to compound doses efficiently for patient satisfaction. Prior to installing BCMP, direct observation revealed that turnaround time for chemotherapy doses averaged 47 minutes from order entry to verification. In the first three months after installation, our turnaround time increased to 54 minutes as staff worked to adjust to the new workflow and system. However, by the end of the first year, we had improved to 39 minutes per dose (see FIGURE 2), mostly due to faster pharmacist verification. The system notifies the pharmacist when the dose is ready for verification, and the pharmacist can verify the dose from a workstation without entering the IV room. During the second year, we designated one technician to prepare all chemotherapy and, by the end of the third year, saw an additional reduction in turnaround time to 30 minutes. 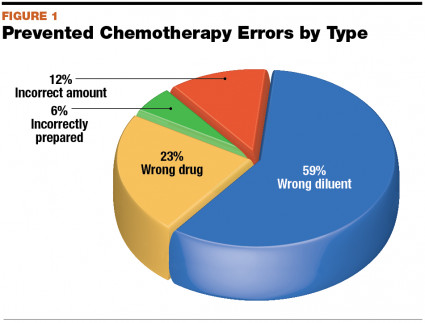 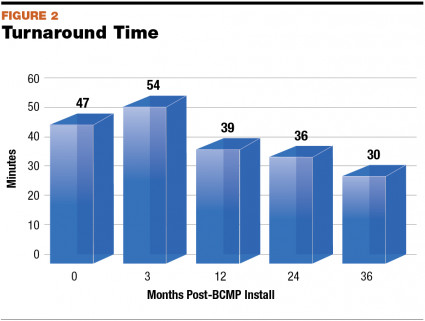 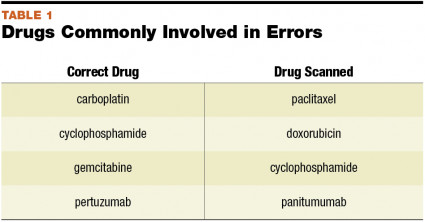 Reduced Waste
Under the old process, incorrectly mixed doses were usually discarded. Since BCMP systems intercept errors prior to mixing, associated waste is avoided. Over the past three years, avoided waste (calculated by totaling actual ingredient costs) averaged $24,000 per year (see TABLE 2), which more than offsets the annual usage fee for the system. BCMP also tracks returned doses, allowing reuse (if they have not expired), and totals the number of discarded doses.

Improving the Hospital Culture
Over the last three years, BCMP has fundamentally changed the culture of our pharmacy. Technicians and pharmacists are now hesitant to dispense IV doses that are prepared without the safety net of BCMP. Intercepted errors are viewed as learning opportunities, rather than punishable offenses.

Results
BCMP has played an important role in preventing nearly 3700 dispensing errors at IUHBH, including 65 involving chemotherapy. The probability that all of these errors would have been intercepted without BCMP is low. Trusting human vigilance and manual methods of verification to detect medication errors is unreliable. When using the syringe-pullback method, for example, the verifying pharmacist cannot tell if a vial was mistakenly placed in the wrong basket.

BCMP helps to ensure accurate preparation of IV doses, which are among the most dangerous and most vulnerable to error. Such systems have been available for some time, yet only 11% of hospitals in the US have implemented this technology.8 Therefore, serious consideration should be given to the benefits of acquiring a BCMP system to detect IV errors.

Considerations for CSTD Use