FDA Expectations for 503B Outsourcing Facilities

Although the 2012 compounding tragedy at the New England Compounding Center (NECC) is undoubtedly among the most significant breakdowns of sterile practice on record in the US, it is well known that similar sterile compounding misadventures have occurred over the past 20 years. However, the sheer scope of the harm caused by the events at NECC has become a watershed moment, inspiring action from regulators.

Within the past two years, dramatic changes have occurred in the regulation of compounding pharmacies. Due to the concern that some compounding pharmacies have been operating as national outsourcing suppliers, the Food, Drug, and Cosmetic (FD&C) Act has been amended to separate these entities from the traditional pharmacy. While previously only the traditional pharmacy was described in section 503, this preexisting text now appears as section 503A and a completely new entity is described—the Outsourcing Facility—in section 503B. 503B entities fall under US Food and Drug Administration (FDA) regulatory authority, and FDA is aggressively encouraging registration.1,2

Fifty-six companies have registered as 503B entities (see ONLINE-ONLY TABLE for a list of these companies, the dates each registered, and the date of their last FDA inspection [accurate as of September 4, 2014]).3 As 503B entities, they can: 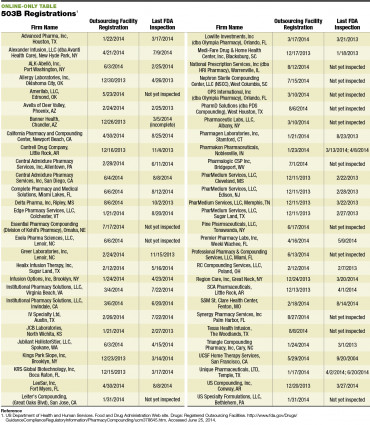 With the advent of the newly designated outsourcing facility, a clear understanding of FDA’s expectations for these entities is vital to compliant operation. FDA has published numerous 483 reports—official observations based on FDA inspections of pharmacies—in 2013 and 2014.4,5 Whether you are considering centralizing your health system’s compounding operation, or simply looking to oversee your outsourced compounding vendors, careful review of the recent 483 reports will facilitate a thorough understanding of the statutory amendments and give some insight into FDA’s current regulatory focus.

It is important to note that USP <797> Pharmaceutical Compounding – Sterile Preparations remains the primary source of guidance for the traditional pharmacy (ie, 503A) in the preparation of CSPs. This article will consider requirements as described in <797> only in relation to the demonstrated FDA expectations and the stated position that the 503B facility will be held to cGMP manufacturing standards.6,7

Recent FDA Regulatory Activity
In response to the events at NECC, and the subsequent congressional hearings, FDA has embarked on an aggressive inspection schedule that focuses on compounding pharmacies that either conduct a significant proportion of their business as outsourcing services shipping preparations across the US or have had issues in quality in the past. This effort has resulted in multiple 483 reports; ninety-four 483 reports for compounding manufacturers producing sterile products are currently posted on the FDA Web site.8, 9 The FDA also has audited several contract testing laboratories; however, the 483 reports specific to the contract testing laboratories are not included in this analysis.

The most common challenges noted during FDA inspections include the following (see TABLE 1): 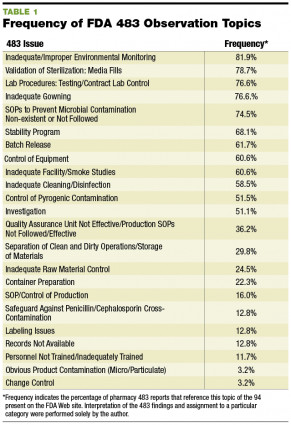 Several other categories of issues are cited in 483 reports at lesser frequency (see TABLE 1.)

The FDA recently released draft guidance for 503B outsourcing facilities,7 which clarifies that these facilities will be held to a standard more akin to pharmaceutical GMPs than to USP <797>. This seems appropriate, as FDA and industry have gleaned insight into how to manufacture sterile medications from each public health crisis that has occurred over the past 80 years; every time a problem is highlighted by a public health event, the GMPs have been modified to prevent recurrence. The most recent 503B draft guidance specifically addresses:

It is clear that the new FDA draft guidance was developed to address the 483 observations.

New Operational Expectations
The new Outsourcing Facility category in section 503 of the FD&C Act has created regulatory confusion in the industry. It is critical that pharmacists have a thorough understanding of the distinctions between traditional pharmacies and outsourcing facilities. Pharmacies that adhere to the traditional practice of pharmacy will remain unchanged, described under Section 503A of the revised act. Pharmacies that wish to manufacture large batches of non–patient-specific CSPs and sell those products across state lines must register as 503B outsourcing facilities and follow basic GMP requirements.

The operational expectations of the FDA under GMP regulations compared with the customary practice of pharmacy can be determined by analyzing the 483 observations available on the FDA Web site and review of the newly released draft guidance. This analysis shows significant changes, including the ability to demonstrate compliance with cGMP manufacturing standards, are required for many facilities to operate as outsourcers. 503B pharmacies that are able to adapt to these expectations may prosper, while those that are unable or unwilling to change to meet the new regulatory realities will likely face challenges over the coming years.

Conclusion
The NECC disaster clearly illustrates why the FDA’s increased scrutiny of compounding pharmacies is warranted. With the FDA’s renewed vigor to ensure compliance, it is perhaps unsurprising that increased auditing has uncovered concerns at numerous facilities. Thus, how a facility responds to a 483 observation is possibly the best measure of its capabilities; facilities that respond with a detailed plan to address and amend the observations are more likely to fare well in subsequent inspections. FDA’s increased auditing activities likely will improve compliance at pharmacies nationwide, with the goal of avoiding future compounding tragedies on the scale of NECC.

Scott Sutton, PhD, is the principal of Microbiology Network, Inc, and is an active consultant and trainer in the pharmacy industry with expertise in GCP/GMP, FDA preparation and response, environmental monitoring, contamination control, and microbiology laboratory audits and operations. The Microbiology Network supplies consulting, training, Webinars, and email discussion groups. Dr. Sutton is a prolific author and speaker for the industry and has served with the USP Analytical Microbiology Committee of Experts since 1993. The opinions expressed in this article are his alone and do not necessarily reflect the policies or positions of any organization with which he is associated. Scott may be reached at scott.sutton@microbiologynetwork.com.