Register for our 1/31 Webinar: Automating Preparation of Hazardous CSPs

Not too many years ago, the standard temperature monitoring process in pharmacy involved manually taking one or two daily temperature readings in a refrigerator and entering this information on a refrigerator temperature monitoring log taped to the door of the unit. Now, technology affords us the ability to set acceptable temperature ranges on all equipment, remotely monitor temperature environments on a 24/7 basis, and have systems dispatch alerts when excursions occur. This technology also has demonstrated the inadequacy of the once or twice daily, moment-in-time manual reading methodology as a means to accurately extrapolate the temperature of an environment during the remainder of a 24-hour period.

Many factors can adversely affect a temperature-controlled environment, including power outages, inadequate or nonexistent preventive maintenance programs, the use of equipment not designed to maintain the tight temperature ranges necessary for proper medication storage, doors left ajar, and inadequate staff training. Of late, temperature monitoring of vaccines has received a fair amount of attention, due to the Centers for Disease Control and Prevention’s recently released Vaccine Storage and Handling Toolkit, which impacts the federally funded Vaccines For Children (VFC) Program.1,2 State agencies, most notably those administering the VFC program, are now more closely monitoring all locations where vaccines are stored and administered. Facilities must document that proper environments are maintained, that temperature excursions are addressed, and that temperature monitoring systems are recalibrated annually. This last point is significant because, regardless of the system in use, a tendency exists for drift—a shift in set point—to develop over time. Because inaccuracies in a system tend to be cumulative, recalibration is a necessary step, especially when a device operates close to either end of its acceptable range. It is important to note that noncompliance with these new VFC requirements can impact program participation.

Features Desired in a Temperature Monitoring System
Virginia Mason Medical Center is a nonprofit organization featuring a multispecialty group practice of more than 460 physicians, an acute-care hospital licensed for 336 beds, and a network of regional clinics. Five-and-a-half years ago, we implemented a Web-based temperature monitoring system to support the entire organization. Initially, the focus of the endeavor was on medication refrigerators and freezers, but it since has expanded to include some laboratory devices, an investigational drug service, and food and nutrition services located on the hospital floors. The system currently monitors over 160 hardwired points, although it can support wireless connectivity, too.

Although systems exist that do not monitor temperature 24/7, yet allow for compliance with regulatory bodies, they generally do not have the ability to alert users to existing or potential problems. Typically, they only indicate that a temperature excursion has occurred. Depending on the length and severity of the excursion and the medications stored in the unit, the result is often product destruction and waste, which is an expensive proposition. Therefore, those systems that provide round-the-clock monitoring are preferable.

In addition, the following features are desirable in a temperature monitoring system:

Comprehensive Flexibility. The system should be comprehensive, meaning that it should have the ability to accommodate the different temperature monitoring requirements of the health care entity, including those for medication storage, the laboratory, food and nutrition, and research. Each year, new requirements emerge to monitor areas previously not protected, so the system should be flexible and capable of expansion. This averts the need to adopt multiple systems when a single solution could meet a facility’s requirements in a more standardized fashion.

Web-based File Server. Benefits exist for both Web-based and in-house file server systems; however, a Web-based system generally is less expensive to implement and support.

Support for Connectivity. Consider a system that supports both wired and wireless connectivity. A wired system does require the physical installation of wiring wherever probes and devices will be located (thereby limiting the portability of that equipment), but connectivity is usually reliable. Conversely, wireless systems offer placement and movement flexibility, but can present challenges with some protocols, may provide unpredictable connectivity, and carry the risk of dead zones.

Alert Options. Systems should allow for alerts to be sent to designated personnel via page, email, and/or text. The information transmitted within the alert should be sufficient to guide the responder to the proper corrective action. For an example of an alert, see FIGURE 1. 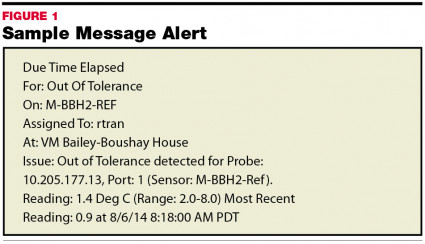 Alerts also should include such information as the current reading and the desired range; whether a loss of network communication (ie, internet connectivity) occurred; and whether power was lost to the device (eg, refrigerator or freezer), the temperature monitoring system, or the overall facility. To avoid the effects of localized power outages, refrigerators and all monitoring equipment should be connected to emergency power sources.

Alert Escalation Process. The system should have as part of its design an alert escalation process, so that if the first responder does not address the issue within a specific time period, the alert escalates to the next level. For example, with our system, if a temperature excursion, a loss of network connectivity, or a power outage occurs, a message is sent to the first responder. That person has 20 minutes to correct the situation and document their response on a task activity form that is generated in the system at the same time. If the system detects that either the situation was not corrected or that the corrective activity was not documented, the alert is repeated. Should an additional 20 minutes transpire with no correction, the system then escalates the alert process by contacting the second-tier responder who is typically a manager. Reports are run each week to determine if appropriate actions were taken in a timely fashion.

Documentation. The system should require that the alert responder document any corrective activity, thus providing an audit trail for quality assurance purposes and inspectors’ queries.

Regulatory Requirements. The system should have the ability to meet federal, state, and local regulatory requirements. It is especially important that a staff member be assigned to keep abreast of changes to regulations, particularly local ones, as they tend to be the most challenging. For example, our temperature monitoring system supports locations in three different counties in Washington. Each county employs slightly different standards, and we must comply with all of them.

Reports. The system should have the ability to generate various types of reports for both regulators and for internal data mining. Ideally, it should be capable of producing graphs that depict temperature over time and reports that document the actions taken in response to alerts.

Sharing Responsibility for System Support
Creating a multidisciplinary group that will be responsible for managing and maintaining a temperature monitoring system is fundamental. The successful implementation and ongoing effectiveness of a temperature monitoring system is dependent upon a team of people becoming, and remaining, engaged and invested in it. Because the primary focus of many of these systems is the monitoring of medication storage, the tendency is to place responsibility for the system solely in pharmacy’s purview, but the process needs to be group driven and owned.

For example, a successful temperature monitoring system requires the involvement of nurses, as they work in areas where medications are commonly stored, and the most common source of alerts is a refrigerator door left ajar. Similarly, information technology (IT) requires a seat at the table to ensure that equipment is operating correctly and that communication lines are kept open. Representatives from engineering also must be included in order to address any malfunctioning equipment and to oversee scheduled preventive maintenance.

At our facility, we divided the responsibilities associated with the temperature monitoring system (ie, support, maintenance, new installations, etc) among a group of representatives from pharmacy, nursing, IT, and engineering, and created a shared document to clearly delineate each person’s responsibility, which helps encourage accountability.

Ongoing Educational Needs
Even after a system is implemented, additional issues frequently arise that require attention and ongoing training of staff members. Often such issues can be handled at collaborative meetings or during impromptu 5- to 10-minute staff huddles. The following areas tend to require ongoing support and education:

Additional Units. Facilities seldom can afford to replace all refrigerators and freezers simultaneously. Unless a facility has made a concerted effort to eliminate substandard equipment, either by mandate from a regulatory body (eg, The Joint Commission or the Department of Health) or just because it is the right thing to do, many locations continue to have inexpensive, residential- or dorm-style units lurking in various locations in the hospital. Interestingly, even though such units are not designed to store medications, some of them are compliant. They usually have wide temperature swings, but sometimes the peaks and valleys reside within allowable upper and lower limits.

When we implemented our system, we replaced all of the dorm-style refrigerators, but we allowed the system data to dictate which of the remaining units required immediate replacement. This resulted in about half of all our refrigerators being supplanted in the initial phase of the project. Over the next three years, we updated the rest, and in so doing, eliminated a tremendous number of nuisance calls, which are rare today. Keep in mind that if all older and inappropriate refrigerators are not replaced at the outset of the project, a new temperature monitoring system most likely will identify these older devices, often through non-stop alerts. Replacing older units with medication-grade equipment is expensive, but worth the added investment when you consider that, in many cases, the medications stored in these units are worth thousands of dollars.

Probes. Probes should be placed in a central location within refrigerators and freezers. We have found that placing a box around each probe helps to keep staff from moving them. We also make sure that all personnel using the unit are aware of the probe’s location and that they understand how the unit should be stocked. For example, placing several room temperature items in a refrigerator or freezer in close proximity to a probe can create a temporary warm zone around the probe that will generate an alert.

Recalibration. Elements in temperature monitoring systems experience drift over time. Generally, the changes are small—usually less than one degree—but, occasionally, they involve several degrees. Because some of the medications stored in these devices are extremely temperature labile, these systems require annual recalibration in order to function properly and safeguard temperature-dependent products.

Conclusion
To ensure that a health care entity provides safe and effective medications to its patients, an automated system that not only monitors temperatures and trends data, but alerts responders to potential or actual problems, is vital. Having a multidisciplinary team in place to share the responsibility for such a system eases the burden and helps ensure that units and users function optimally.