For over a decade, USP Chapter <797> has encouraged strict adherence to safe practices involving compounded sterile products (CSPs); however, not all state pharmacy boards have been inspecting to this standard. One of the practices that pharmacies typically have not performed unless required to do so is in situ air pattern analysis via smoke studies.1

Airflow visualization analysis via smoke studies is performed to ensure that airflow within an ISO Class 5 environment (critical airflow area) is without turbulence, reflux, or obstruction. The sterility of CSPs in critical areas relies heavily on the quality of the airflow and the performance of HEPA filters. According to USP Chapter <797>, HEPA-filtered air should not only be sterile, but it also should be delivered “at a velocity sufficient to sweep particles away from the compounding area and maintain unidirectional airflow” during compounding.2 The most crucial time for high velocity, unidirectional airflow is during CSP manipulation and preparation.

USP <797> requires testing in all ISO Class 5 environments, including primary engineering controls (PECs), such as laminar airflow workstations (LAFWs), biological safety cabinets (BSCs), and compounding aseptic isolators (CAIs). Airflow around items within PECs, such as sharps containers and closed system drug-transfer devices (CSTDs), should be tested for obstruction or reflux to ensure air moves from the HEPA filter to the critical sites without interruption. In addition to required ISO Class 5 environments, air quality specialists may perform smoke studies in ISO Class 7 or 8 environments adjacent to new construction or in areas with potential sources of contamination, such as near personnel entrances, medication pass-throughs, computer accessories, or compounding equipment to ensure proper airflow away from the direct compounding area (DCA). First air originating from the HEPA filter should pass over and away from the critical compounding site, then move toward a higher ISO Class or prefilter.

Frequency
USP Chapter <797> and the Controlled Environment Testing Association (CETA) recommend that environmental control testing be completed by a qualified specialist no less than every six months to maintain compliance1,3; however, some institutions have implemented policies for airflow testing to occur more frequently. Air pattern testing can be extremely beneficial when training or recertifying compounding employees. Allowing employees to witness obstructed airflow and visualize where air is without turbulence is an excellent way to illustrate where first air is most abundant and where compounding should occur. Likewise, performing smoke tests during mock manipulations allows compounders to be more attentive to appropriate aseptic technique.

In addition to performing airflow visualization analysis during regular certifications and to train staff, airflow visualization analysis should be performed following any renovation and after equipment near critical areas is moved, as any changes to the surrounding environment can severely impact the velocity and direction of airflow. Because it can be expensive and challenging to arrange for an air quality specialist to perform testing each time a new employee is hired or equipment is relocated, it is worthwhile to train a pharmacy staff member, such as a lead pharmacy technician or pharmacist, to perform these tests. Demonstrations and training can be performed using inexpensive smoke sticks that produce dense white smoke. Generally, smoke sticks can be found easily through air quality specialist recommendations or cleanroom accessory suppliers. Although air quality specialists are required to certify sterile product environments, employees can be empowered to play a significant role in maintaining quality and compliance.

Results
Results of smoke tests are qualitative, rather than quantitative; they reveal the characteristics and the direction of airflow, rather than exact measurements. For example, a result may read, “Smooth, consistent airflow over and away from the DCA.” Improper results should describe the qualities and the factors contributing to the obstruction or turbulent airflow. Pharmacy staff must use their clinical and operational discretion when reviewing results of smoke studies and make their best effort to resolve precipitating factors within a timely manner. All smoke studies must be appropriately recorded and documented for compounding inspections. Air quality specialists should include results with regular performance evaluations and certifications. In addition, organizations should document separately results of testing and training within their own quality assurance software, and all smoke test results should be kept in a readily retrievable format to satisfy state and federal inspection requirements.

Smoke Testing at UNCMC
Currently, 22 states have regulations requiring 797 compliance, 23 states mention the regulations, and five make no mention of USP <797>.4 Smoke testing will become increasingly important as additional states mandate USP <797> compliance. The North Carolina Board of Pharmacy (NCBOP) recently proposed amendment 21 NCAC 46.1412, which would require statewide <797> compliance.5 With the expected passage of this amendment, the NCBOP has updated its Compounding Inspection Report to include a section on smoke tests. For this reason, the University of North Carolina Medical Center (UNCMC) performs air pattern analyses, at a minimum, in all ISO Class 5 environments for both compliance and education. Contracted air quality specialists perform smoke testing along with standard air testing every six months and immediately after any major renovation to ensure compliance with USP <797>. The smoke studies are documented within the usual results provided by our testing specialists and retained for a minimum of three years.

The most recent smoke test performed in the UNCMC sterile compounding area revealed that the automated compounding device extended into an area of stagnant airflow. As a result of this discovery, we immediately shifted the device into an area of optimal airflow.

UNCMC also has recognized the importance of smoke demonstrations when training new compounding employees. After spending a few hours on-site with our contracted air quality specialists, the sterile products pharmacy manager mastered the process of demonstrating smoke studies for educational purposes. Along with computerized compounding competency training and fingertip testing, new compounders now are required to observe a live smoke demonstration. While UNCMC does not currently videotape or photograph performed demonstrations, results of educational training are maintained in individual personnel files for the tenure of employment. 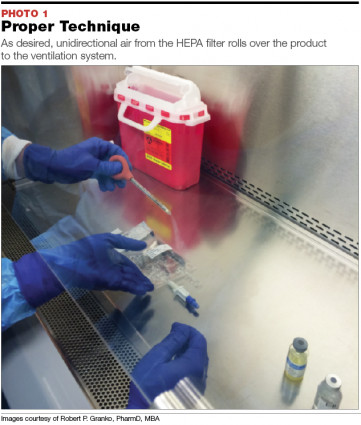 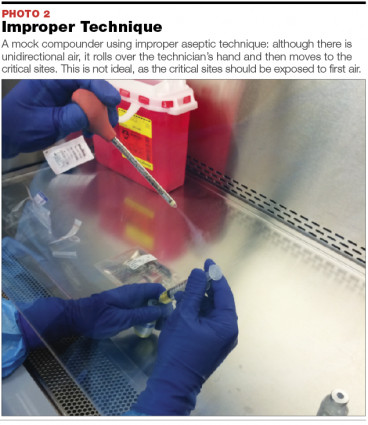 Education and Regulation
Understanding the intricacies of all aspects of USP <797> is increasingly important as mandatory compliance is becoming more common. Although USP <797> requires smoke testing at least every six months in all ISO Class 5 environments, at UNCMC we have experienced success in implementing the testing more frequently for educational, as well as regulatory, purposes.

Daniel P. O’Neil, PharmD, is a PGY2 health-system pharmacy administration resident at the University of North Carolina (UNC) Medical Center and is currently completing his MS in Health System Pharmacy Administration at the University of North Carolina Eshelman School of Pharmacy. He received his Doctor of Pharmacy from Lake Erie College of Osteopathic Medicine.