Moving to a Medication-Grade Refrigeration System

The Veterans Administration Central California Health Care System (VACCHCS), located in Fresno, California, opened its doors to veterans in 1950. The original building is still in use, although almost every area has been retrofitted and remodeled. Over the years, VACCHCS has expanded to include inpatient facilities and outpatient clinics on our main campus and three community-based outpatient clinics, each of which is located an hour’s drive from the main hub. The health system’s geography combined with its dated, inadequate equipment made temperature monitoring and maintenance of the medication refrigerators and freezers a challenge.

Using a Building Management System to Monitor Temperature
Approximately five years ago, following the loss of more than $60,000 worth of medication due to an overnight refrigerator failure, VACCHCS purchased and installed a building management system that monitors our entire health system’s HVAC equipment, fire, and security systems, as well as all of the refrigerators and freezers.

The first refrigerators and freezers to be monitored by the system were those located in the central pharmacy. Since installation in the main pharmacy, we have not had to discard any medication due to refrigeration failures. The system incorporates warning alarms for out-of-range temperatures that alert the boiler plant operators (a position staffed 24/7), who, in turn, contact the area where the unit is located to have an employee do an initial assessment of the problem (ie, Is the door closed? Is the unit plugged in?). That person then alerts pharmacy service and engineering if further maintenance is required.

Installing the wired building management system in our main buildings was less of a challenge than installing it in our community-based outpatient clinics. Because the outpatient clinics are not on our local intranet, engineering had to set the controllers for the system on separate virtual local area networks (VLANs) and purchase and install network level controllers for the medication and laboratory refrigerators and freezers situated in those remote locations. The control panel for the entire system is located in the boiler plant on our main campus, and the entire facility, including our outpatient clinics, is monitored through the Internet. Contingencies are in place to return to monitoring with thermometers and paper documentation if, for example, the Internet goes down.

“Houston, We Have a Problem”
Once we were able to reliably monitor the clinic refrigerators (apartment-style) and freezers (small counter-top units), data revealed that the temperatures of both were inconsistent and unreliable. The non-medication-grade freezers—which were no bigger than that which would hold a six-pack of cans and were used primarily to store herpes zoster vaccine—were not self-defrosting; ice (which acts as an insulator) would frequently accumulate inside, interfere with the rubber gasket seal, and prevent the door on the unit from closing completely. This would set off an alarm and require our HVAC technician to drive an hour each way to the outpatient clinic to defrost and reset the unit. Moreover, it would require disposing of all the herpes zoster vaccine stored in the unit, and, at over $100 per dose, the losses were significant.

In addition, the freezer sections of the apartment-style refrigerators in the clinics went unused because they could not achieve a sufficiently cold temperature for the medications that required freezer storage. Also, the temperature of the units was difficult to maintain. Even slight adjustments caused the temperature to rise too high or fall too low. Finally, because our medication rooms are small and the refrigerators gave off considerable heat, it was difficult to maintain the proper room temperature. To remedy this problem, we would have to either improve the ventilation in the rooms, which was not an option because the property was leased, or purchase more appropriate refrigerators.

Upon reflection, the cost impact of maintaining the old units was deemed a lost opportunity cost, as this time could have been better spent on other projects.

A Plan for Change
After it became clear that our refrigerators and freezers were outdated and unreliable, we put together a refrigeration purchasing plan to present to our equipment committee (see SIDEBAR containing data from PP&P’s 2014 State of Pharmacy Automation Survey regarding commercial-grade refrigerator use). Although we would have liked to purchase replacement equipment for the entire facility at one time, budget constraints compelled us to purchase only what was most necessary first and phase in the rest of the plan thereafter. 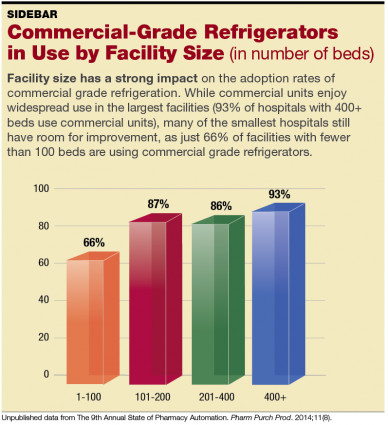 To that end, the chief of pharmacy and engineering staff conducted an assessment of each medication refrigerator and freezer. The units varied greatly in age, size, and type. Based on the data provided by our building management system, our work-order system, and an evaluation of the risk for loss of high-cost medications, we identified the units that were of highest priority for replacement. These included all of the apartment-style medication refrigerators throughout the campus, along with the refrigerators and freezers in the outpatient clinics because of the issues already outlined and their distance from the main facility, which made timely maintenance and repair more difficult. We also evaluated the spaces where each new unit would be located, as one of our goals was to purchase the largest interior capacity unit that each space would allow to accommodate future expansion. Additional goals included:

Based on the funding available for purchasing equipment, we chose the replacement refrigerators and freezers and worked with our purchasing department to prioritize obtaining them.

Results
Each refrigerator that arrived was inspected and tested by our engineering department before being delivered to its final location. Once in place, engineering staff worked with pharmacy to determine the temperature and length-of-time settings for out-of-range alarms.

The medical-grade freezers that replaced the freezers in the outpatient clinics had a defrost cycle built into the programming. As a result, ice no longer accumulates in any of the units. And once the apartment-style refrigerator units were replaced with medical-grade clear glass door refrigerators, not only were temperature fluctuations no longer an issue, but the nurses could see if a medication was in stock without opening the unit door.

FIGURE 1 shows an example of a refrigerator that was accidentally unplugged by a housekeeper during floor waxing. The pharmacy was notified that the unit was out of range, and the medications were removed and placed in the central pharmacy refrigerators. Because we had access to detailed information regarding the incident, we could perform a thorough analysis to determine whether we needed to destroy medications or put them back in place after the issue was corrected (ie, refrigerator plugged back in) and the refrigerator returned to an appropriate temperature. 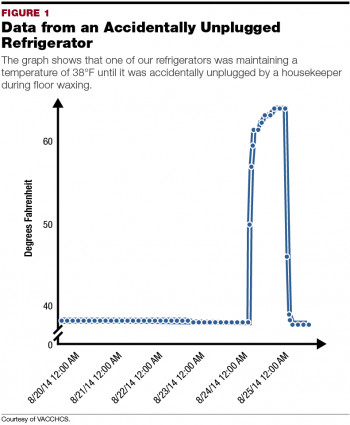 To date, we have replaced all but one refrigerator in our organization. We have found that data from a building management system can be helpful in supporting the purchase of reliable medical-grade refrigerators and freezers. Such units are worth the expense when you consider that they maintain tighter temperature control, require fewer hours to maintain, are more durable than non-medical-grade refrigerators, and lead to significantly less medication waste.

Melissa A. Chase, PharmD, AAHIVP, is chief of pharmacy service at VA Central California Health Care System, Fresno, California. After graduating from The University of the Pacific in Stockton, California, with a Doctor of Pharmacy degree, Melissa began her pharmacy career by completing a General Pharmacy Practice Residency at Washoe Medical Center in Reno, Nevada, in 1999. She began her VA career in May 2000 as an inpatient staff pharmacist. In that capacity, Melissa provided direct veteran care as an HIV clinical pharmacy specialist. She then spent four years as the clinical coordinator for pharmacy services. Melissa is an adjunct professor for the University of the Pacific School of Pharmacy and has served as secretary and continuing education coordinator for the Sierra Society of Health-System Pharmacists.