Each year, approximately eight million US health-care workers are potentially exposed to hazardous drugs (HDs) at the workplace.1 A multitude of studies document that workplace exposures to HDs can cause both acute and chronic health effects, such as skin rashes, adverse reproductive outcomes (including infertility, spontaneous abortions, and congenital malformations), and possibly leukemia and other cancers.1 In fact, the NIOSH website maintains a list of all of the studies related to HD exposure and potential health effects in humans.2

Yet according to Pharmacy Purchasing & Products’ (PP&P’s) annual survey of hospital pharmacists on the State of Pharmacy Compounding, just 39% of facilities employ closed system drug-transfer devices (CSTDs) for HD preparation; CSTDs are the only technology designed specifically to protect health-care workers from exposure to HDs.3

Studies show that CSTD usage reduces the frequency and amount of contamination both in pharmaceutical isolators and on surfaces surrounding chemotherapy infusion.4,5 Training on the proper use of CSTDs by health-care workers was listed as a should in the 2008 revision of USP Chapter <797>,6 but the new proposed General Chapter USP <800> Hazardous Drugs—Handling in Healthcare Settings now recommends the use of CSTDs during compounding and states that health-care workers shall use CSTDs during administration when dosage form permits.7

Reasons for Not Using CSTDs
Facilities not currently employing CSTDs generally cite financial restrictions, such as budget constraints, purchase price concerns, or operational cost concerns.3 There are still some hospital pharmacists who, despite compounding HDs, say they see no need to use CSTDs. Other reasons cited include a lack of administrative support and the belief that the devices are too complicated to implement.

However, CSTD use should no longer be optional. Implementing the safety mechanism should not be a function of HD compounding volume or administration  volume; nor should financial constraints be considered a valid argument against CSTD adoption. Rather, we propose that CSTDs are imperative to the protection of all employees who handle HDs and are a necessary cost of doing business in health care.

Karmanos Cancer Center has 89 licensed inpatient beds and three outpatient infusion centers on its main campus located on Wayne State University in Detroit. An additional infusion center is located 25 miles north of the main campus. The center sees about 6,000 new cancer cases per year, and the pharmacy prepares between 200 and 250 chemotherapeutic medications per day, all of which are custom-made; the pharmacy does not batch produce.

Karmanos has been using CSTDs since 2001 and views these devices as critical for staff protection. Integrated into all areas of HD production, all of our 21 technicians use the devices during compounding, as do all of the nurses during administration for all agents considered mutagenic—not just chemotherapies.

Staff Training
Proper use of CSTDs is contingent on quality training programs for all of the staff members who will use them. We have had two CSTD vendors over the years; both assisted with the initial training of nurses and pharmacists when we began using their products, but ongoing training of staff and new hires requires the commitment of the health-care facility.

To that end, all of our new pharmacy hires view ASHP training modules on Compounding Sterile Preparations and Safe Handling of Hazardous Drugs, and successfully complete the post-tests of each before they are permitted to work in the chemotherapy lab. In addition, newly hired pharmacy staff initially start in the regular IV room where they spend a few weeks perfecting their aseptic technique through testing, observation, and buddy training with an experienced technician. After successfully completing a competency test, they are introduced to chemotherapy compounding, where the hands-on training process is repeated. Incorporated into their chemotherapy training is learning to function effectively within a cleanroom and to use CSTDs appropriately. Upon passing a chemotherapy competency test, they are allowed to compound independently.

At Karmanos, all technicians must pass annual competencies that include a written component and the live performance of media fills, which demonstrate competency at preparing chemotherapeutic agents in a sterile environment without contaminating the product. In other organizations, such testing may be conducted monthly or semi-annually, depending on the facility’s compounding volume.

Because we are a cancer center, all of our technicians must be competent at preparing chemotherapies and must rotate through the chemotherapy area, in addition to the areas that prepare unit dose and IV medications. Although some larger facilities have technicians dedicated solely to individual pharmacy areas or functions, our philosophy is to have all of our staff members competent in all of the functions we perform. Not only does this reduce cumulative HD exposure for individual employees, but it also helps avert the boredom that can set in when employees perform the same task for the majority of their work hours. This, in turn, helps keep job satisfaction levels elevated.

A final element of the training process is ensuring that employees have a healthy respect for the agents they are handling, and that this respect endures  through every step of the handling process, from compounding through administration to disposal. 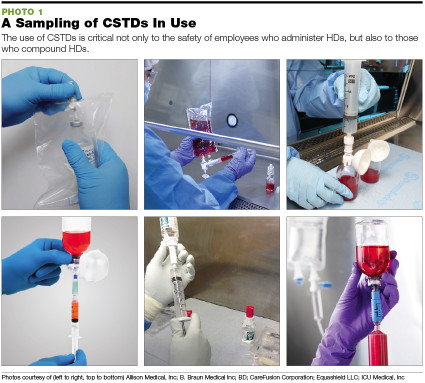 Click here to view a larger version of these photos

Evaluating Containment Measures
Wipe studies are an excellent tool for evaluating surface level contamination, as well as staff compounding technique. As the technology for containment has improved, so have the results of wipe studies. When chemotherapy compounding moved into the BSC, for example, wipe studies demonstrated that this extra layer of containment lowered exposure for compounding staff by revealing lower levels of contamination on work surfaces. With the incorporation of CSTDs into the production process, wipe studies demonstrate a further reduction in exposure; now, testing measures chemotherapy residue in nanograms and picograms, rather than in micrograms—a 10-3 to 10-12 decrease.

At Karmanos, we perform environmental surface studies every six months, and these studies are unannounced so that staff members do not change their habits in anticipation of the testing. In the compounding cleanrooms, we test multiple areas, including various locations within the hoods, the floor, the technicians’ chairs, and the final product check area. Also, we conduct wipe studies in the infusion center, where tested locations include the drug delivery area, patients’ chairs, and the areas around waste containers.

The goal should be to wipe areas throughout the life cycle of the chemotherapeutic agent. Sharing the results of the wipe studies with employees provides an opportunity to remind staff to respect the level of hazard involved in chemotherapy production. Wipe results can serve as a reminder to technicians of the importance of following proper compounding technique. Likewise, for nurses, the results underscore the value of following P&Ps and using CSTDs for proper administration. Also, they serve as a reminder of the potential danger to visitors. Almost all of our patients bring with them a family member or friend to chemotherapy sessions. Those visitors often sit quite close to chemotherapy infusions. Without CSTDs, these people potentially could be exposed to the toxic effects of chemotherapeutic agents.

P&Ps for Extenuating Circumstances
Although rare, it is important to have P&Ps in place for managing exposure should a CSTD malfunction or be used incorrectly. In such instances, staff should handle the situation like a spill, ie, the exposed employee should go to the employee health office to be treated for acute exposure to an HD agent. In addition, the hood should be cleaned and decontaminated, an incident report should be filed, etc. It is important to treat such situations gravely and to have a thorough response prepared in advance.

Similarly, it is vital to have provisions in P&Ps for employees who are pregnant, actively trying to become pregnant, or breastfeeding. Opt-out provisions should be available not just to female employees, but also to males who are actively trying to conceive with their spouses. At our facility, the opt-out period is six months, but many of our employees in these situations feel sufficiently safe and protected in their work environment and, thus, do not opt out of working in the chemotherapy handling areas at all.

Pharmacy and Nursing Collaboration
Use of CSTDs is equally important by pharmacists during the compounding process and by nurses during drug administration. PP&P’s survey shows that use by the two groups is not that disparate; about 39% of hospital pharmacies use CSTDs during compounding and about 32% of nurses employ the devices during the drug administration process.3

Both pharmacy and nursing should work together when choosing and procuring a CSTD product. Although it is pharmacy’s job to drive the safety component of the HD process, choosing a product and bringing it on board should be a cooperative, collaborative process. Both groups should test potential devices in common, real-world clinical situations to identify the products’ true pros and cons and determine whether the devices are easy and comfortable to use. Although this requires staff training, expense, and time, it is the most effective way to identify the device that best suits the needs of the facility.

Beyond-Use Dating
CSTDs are not intended to facilitate the use of products beyond their printed use date.3 The cost-benefit of such an approach is questionable at best; using a product beyond its printed use date requires such a wealth of ongoing analysis and validation that the time and cost necessary to prove the continued suitability of the drug may provide little overall value.

The Cost of Doing Business
Historically, pharmacists believed that negative pressure and laminar hoods that prevented aerosolization out of the vial provided sufficient safeguards to protect pharmacists and to ensure the sterility of products. Unfortunately, these measures did nothing to address mutagenicity. Next, pharmacy progressed to using vertical hoods and BSCs, and to using wipe testing to quantify surface contamination, all of which further lowered exposure for health-care workers. Now, in addition to using wipe testing to validate surface level contamination and preparation technique, the best method we have of protecting employees from HD exposure is using CSTDs.

CSTDs should be an intrinsic part of HD practice. Just as hospital administrators would not consider constructing a new x-ray room without lead-lined walls, and pharmacists would not contemplate compounding on an open counter, CSTD usage must be deemed fundamental to the safety of health-care workers. These devices are quite simply a necessary cost of doing business when working with HDs. Although outfitting an entire facility with these devices is a significant expenditure, purchase price is not the only factor to consider (see SIDEBAR). Given that no safe level of exposure has been established and that chemotherapeutic agents can affect cell growth and proliferation, pharmacy directors have an obligation to minimize exposure for employees to the lowest levels possible using all available technology.

Stephen T. Smith, MS, FASHP, is executive director of pharmacy service at Karmanos Cancer Center in Detroit. He received his BS in pharmacy from the University of Michigan and his MS in hospital pharmacy from Wayne State University. Steve has over 30 years of institutional pharmacy practice with employment at the Detroit Medical Center, Crittenton Hospital, and the St. John Health System. He has an extensive history of training students and pharmacy residents in oncology practice and has served as adjunct clinical professor of pharmacy practice at both the University of Michigan and Wayne State University Colleges of Pharmacy.

SIDEBAR
Factors to Consider When Choosing a CSTD