Are Gloves and Gowns Safe for Handling Chemotherapy?

Pharmacists, nurses, and other health care personnel who handle antineoplastic (chemotherapy) drugs require appropriately tested gloves that protect them from dermal exposure, but there is confusion about which gloves provide adequate protection.

The American Society for Testing and Materials (ASTM) currently has two standards for testing the permeation of glove materials by chemicals: ASTM F739-99a (F739), which is the Standard Test Method for Resistance of Protective Clothing Materials to Permeation by Liquids or Gases Under Conditions of Continuous Contact,1 and ASTM D6978-05 (D6978), which is the Standard Practice for Assessment of Resistance of Medical Gloves to Permeation by Chemotherapy Drugs.2 Because of the highly toxic nature of chemotherapy agents, the National Institute for Occupational Safety and Health (NIOSH),3 the American Society of Health-System Pharmacists (ASHP),4 the Oncology Nursing Society (ONS),5 and the United States Pharmacopeial Convention (USP)6 state that health care workers who handle antineoplastic and other hazardous drugs (HDs) should wear gloves that have been tested for permeation by the more robust D6978 standard rather than the standard used for other chemicals─—F739.

In addition, testing under the D6978 standard is conducted at a temperature of 35±2°C because the temperature of gloves approaches body temperature shortly after being donned.7 By comparison, the test temperature under standard F739 is ambient room temperature (approximately 25°C). This difference is significant because permeation increases with temperature; warmer gloves allow greater permeation of drugs.8

Consequences
Some glove manufacturers test the permeability of their gloves using the seven required and two optional drugs listed in ASTM D6978 (see TABLE 2), but then report the breakthrough times based on the higher permeation rate and the lower temperature testing parameters specified in ASTM F739. Testing gloves using the parameters of ASTM standard F739, instead of D6978, can result in a shorter breakthrough time and a substantially increased risk of exposure to chemotherapy drugs. If health care workers change their gloves every 30 to 60 minutes, as recommended in most guidelines, then using the gloves in the presence of drugs that do not permeate them within the four-hour time limit and using ASTM F739 testing parameters may not be an issue. However, for those drugs that permeate the gloves in shorter time periods, health care workers could experience substantially greater dermal exposure (see PHOTOS 1 AND 2). 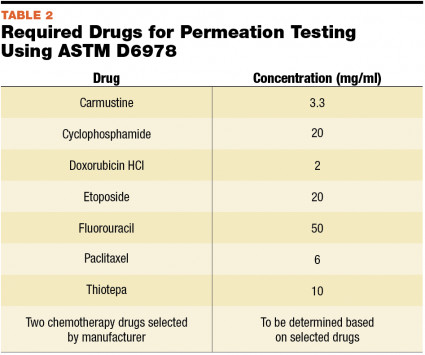 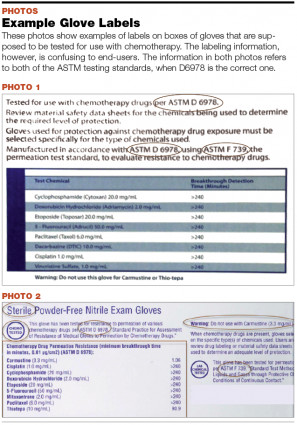 No Equivalent for Gowns
ASTM standard D6978 is specific for testing gloves used with chemotherapeutic agents; no equivalent permeation test standard exists for protective gowns, which also are recommended by most guidelines when health care workers handle chemotherapy drugs. As a result, some gown manufacturers employ an approach similar to that used with gloves; they combine sections of standards F739 and D6978 and apply the parameters to gown permeability testing. Mixing and matching of standards and testing parameters that do not apply to gowns may lead to unnecessary exposure of health care workers to chemotherapy and other HDs that are spilled or splashed on the gowns. Because gowns have no specific standard at this time, the user and purchaser must be aware that there is a risk when mixing standards that the gown is not as protective as advertised.

Stay Informed and Stand Firm
Because federal agencies and professional organizations, such as NIOSH, ASHP, ONS, and USP, recommend using gloves tested according to ASTM’s D6978 specifications, glove manufacturers should adhere to all requirements of D6978 and provide accurate test information to health care workers who rely on the gloves for protection against exposure to chemotherapy and other HDs.

Disclaimers
The findings and conclusions in this report are those of the author(s) and do not necessarily represent the views of the National Institute for Occupational Safety and Health (NIOSH). Mention of any company or product does not constitute endorsement by NIOSH. In addition, citations to Web sites external to NIOSH do not constitute NIOSH endorsement of the sponsoring organizations or their programs or products. Furthermore, NIOSH is not responsible for the content of these Web sites. All Web addresses referenced in this document were accessible as of the publication date.

Thomas H. Connor, PhD, is a research biologist at the Centers for Disease Control and Prevention, National Institute for Occupational Safety and Health, Division of Applied Research and Technology in Cincinnati. He received his BS and MS in microbiology from the University of Rhode Island and his PhD in environmental toxicology from The University of Texas Medical Branch, Galveston. Tom joined NIOSH in 2001. He was the lead author on the NIOSH Alert: Preventing Occupational Exposures to Antineoplastic and Other Hazardous Drugs, along with other related NIOSH documents. In 2008, he received the ASHP Board of Directors Award of Honor recognizing almost 30 years of research involving the protection of health care workers from hazardous drug exposures. In 2010, he received the International Society of Oncology Pharmacy Practitioners Achievement Award for his role in helping to develop international safe handling guidelines for hazardous drugs.

Luci A. Power, MS, RPh, is senior pharmacy consultant at Power Enterprises in San Francisco. Luci was with the department of pharmaceutical services at the University of California Medical Center in San Francisco for over 25 years serving in various capacities, including as senior pharmacist and manager of the parenteral support services and as manager of IV additive services, where she was responsible for inpatient chemotherapy and other hazardous drug compounding.

Firouzan “Fred” Massoomi, PharmD, FASHP, is pharmacy operations coordinator in the department of pharmacy services at the Nebraska Methodist Hospital in Omaha. Fred received his doctorate from the University of Kansas School of Pharmacy. He completed a one-year fellowship at the Universite of Laval in Quebec City, Quebec, and an ACCP-accredited residency in pharmacokinetics at Creighton University in Omaha, Nebraska. Fred is the 2014 Nebraska Pharmacists Association President.

Martha Polovich, PhD, RN, AOCN, is clinical associate professor at the Byrdine F. Lewis School of Nursing and Health Professions at Georgia State University in Atlanta. Previously, Martha was the director of clinical practice, nursing research, and education at the Duke Oncology Network in Durham, North Carolina. She has been an oncology nurse since 1980, having been responsible for chemotherapy administration in inpatient and outpatient settings. Martha also serves as co-editor of the ONS Chemotherapy and Biotherapy Guidelines and Recommendations For Practice and editor of the ONS publication Safe Handling of Hazardous Drugs. She has been the ONS liaison to the NIOSH Hazardous Drug Safe Handling Working Group since 2000 and the ONS representative to the ASCO/ONS Chemotherapy Safety Standards steering committee since 2008.