Automating Medication Use in the OR

It is not uncommon for the medication use process in procedure areas to lag behind other areas in the hospital in innovation. This is largely because balancing convenient access to the medications needed in these environments with the necessary control and security can be an elusive goal.

Juggling these priorities has become even more challenging as targets for OR turnaround times have shortened while efficiency goals are rising.

In addition, regulatory scrutiny over medication control, security, documentation, and labeling has heightened over the past 10 to 15 years in response to reports of anesthesia staff diverting controlled substances from procedure areas. One study reported that about 10% of nurse anesthetists admitted to misusing anesthesia medications at some time in their careers.1 The medications most commonly abused are benzodiazepines, nitrous oxide, opioids, and propofol.1 Because such medications can be lethal when misused, and because anesthesia providers are in the unique position of ordering, retrieving, preparing, and administering medications without the involvement of other practitioners, systems and processes must safely and efficiently support these providers while reducing the opportunity for diversion.

In addition to a family history of substance abuse and coexisting psychological disorders, drug access is a key factor in the risk of developing a chemical dependency problem.2 Also, some physicians believe that because they are able to prescribe these drugs, they are capable of personally using and controlling them.3 While improving control of medication storage and use alone will not stem diversion, it can add to the cumulative effort to help prevent and detect drug theft and misuse.

The following describes one hospital’s effort to incorporate innovation, safety, efficiency, security, regulatory compliance, and cost and time savings into their OR medication use processes. Although the main focus is on implementation of automated anesthesia carts, incorporation of other tools and initiatives are equally important.

The SLH pharmacy, which operates under a point-of-care drug distribution model, currently utilizes medication carousels in the main pharmacy and automated dispensing cabinets (ADCs) in nearly every patient care area. Prior to 2010, the procedure areas relied on drug kits stocked in the supply towers of ADCs, as well as red tool carts sourced from a local hardware store, for medication distribution. The process was almost entirely manual; the only automated step occurred during the restocking of the central ADC in the OR areas. Anesthesiology retrieved complete kits and any controlled substances needed from this central ADC. An anesthesiologist documented the drugs used from the kit, the red cart, the ADC, and, if any were controlled substances, the amount returned for waste, and then signed the form, secured the kit with a yellow pull-tie, and returned the kit to the central ADC as a used kit. If the case was in the OR, the waste and charge sheet were secured in a sealed bag and dropped in a locked drop box in the room. A pharmacy technician retrieved the sealed bags and used kits. The technician replenished the kits with drugs and manually billed patients in the pharmacy information system for the drugs that were documented on the charge sheet. A pharmacist verified that the drug waste returned matched the quantities documented on the charge sheet, cosigned to confirm the waste (if correct), checked the rest of the drugs in the kit, and secured the kit with a red pull-tie. Finally, a pharmacy technician restocked the complete kits in the central ADC.

The process for stocking the tool carts also was manual. A pharmacy technician or intern restocked the red tool carts from a mobile wire cart. Because the tool carts contained open-matrix pockets, it was important to exercise care when loading the medications into the correct pockets. Since about 60 different non-controlled drugs (eg, glycopyrolate, neostigmine, cefazolin, bupivacaine, and lidocaine) were loaded, the chance for mix-up and error was present. Moreover, although a pharmacist double-checked the medications going into the wire cart, there was no double-check of the medications after the technician or intern placed them in the red tool carts. Likewise, the restocking quantity was based on an estimate, rather than guided by established PAR levels.

Problems with the Old System
Numerous problems existed with the kit and cart processes. Accuracy and safety checks were lacking, the stock was not bar-code scanned, and the open-matrix drawers in the red tool carts allowed for drugs to become intermingled, which increased the possibility of medication errors, particularly for look-alike, sound-alike drugs.

The processes also lacked security for controlled substances, especially in our obstetric area, where controlled substances were manually tracked and locked in the same red tool carts that housed all of the other medications. Although controlled substances were dispensed from a central ADC in our main OR location, users often would pull multiple vials under one patient’s name but then administer the vials to multiple patients. As a result, pharmacy staffers were wasting copious amounts of time tracking down documentation and attempting to reconcile the recorded quantities with actual usage. On occasion, pharmacy staff members were put in the difficult position of being asked to provide the second signature on waste when the amount of medication used did not exactly correspond with the waste amount returned.

Because of the inaccuracy of the manual tracking systems, it was impossible to tie inventory management to usage trends. Drug charges often were inaccurate due to the manual documentation of usage; medications used in procedures often went undocumented.

This manual approach ultimately culminated in our being cited on a Joint Commission survey for drug labeling in the OR that did not contain the required information (ie, drug name, concentration, use-by date/time, and user initial).

Improvement Goals
As a result, SLH developed 10 improvement goals addressing medication use in the procedure areas. These goals were to:

To accomplish these goals, SLH added 33 automated anesthesia carts in late 2010 to its automation armamentarium in the operating and procedural areas (see PHOTO 1): five carts went into the cardiovascular ORs, four went to the neurology ORs, thirteen were allotted to the main ORs, two went to interventional neurology, three were assigned to labor and delivery, and six were placed in the cardiovascular/electrophysiology lab. 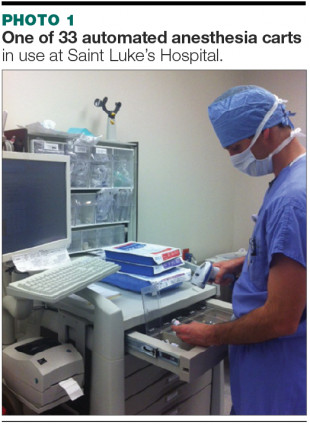 Automating the medication use process in the anesthesia areas delivered the efficiency we were looking for. First, the carts reduced the total amount of time technicians expended on the medication use process. Although the overall amount of time that pharmacists remained involved was similar, more time was spent ensuring the accuracy of drugs. Second, we began scanning drugs when they were dispensed and placed in individually labeled bags for restocking. This restocking process mimicked that of our ADCs, which involved use of the central pharmacy medication carousels for most of the drug stock. Although we did not initially have the capability to scan on restock to the automated anesthesia carts, scanning bar codes on the dispensing end helped reduce the potential for medication restocking errors. Similarly, being able to better manage stock levels in the anesthesia carts through utilization reports enhanced our ability to prevent stockouts, lowering our stockout rate to 1.2%, and provided tighter inventory control that netted an inventory reduction of 49.5%.

Perhaps the most significant benefits were the reductions in controlled substance discrepancies and lost charges. Our controlled substance discrepancies improved from one discrepancy per eight cases to one per 60 cases—an 85% reduction. Likewise, unaccounted units of medications were reduced from 5.9 per room per day with the old system to 2.9 per room per day with the automated carts, resulting in an approximate 50% reduction in lost charges (see TABLES 1-4 for additional data). 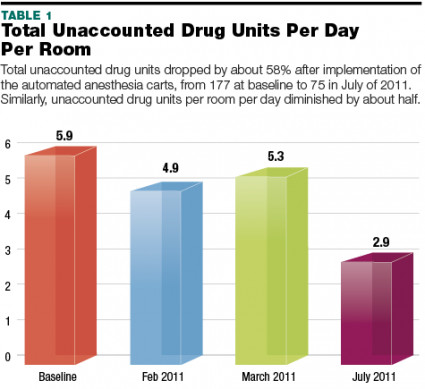 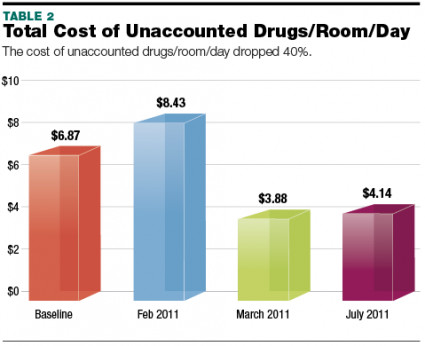 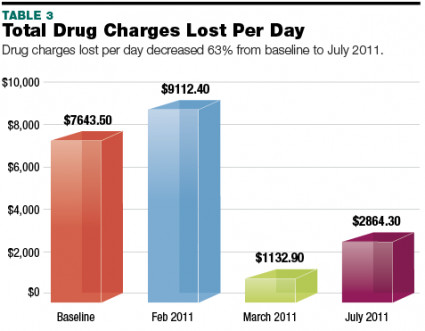 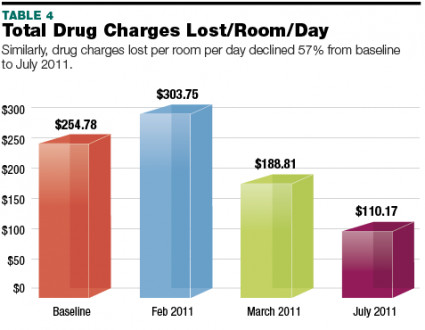 The Ideal Process Incorporates AIMS
Looking to the future, the ideal OR medication use process incorporates more than just automated carts. Fully integrating every step of the process—from pharmacy dispensing the drug to final documentation by the anesthesia provider—is required to develop a safe and effective system. Such integration should involve automation at the point of dispensing, bar-code scanning upon medication restocking, using carts that have individually locking drawers or bins that are sufficiently secure to house controlled substances, and using an anesthesia information management system (AIMS).

Once medications are removed from the individual pockets of the anesthesia cart, bar-code labels should be printed and affixed to syringes containing drawn-up drug to allow for verification prior to administration. When using an automated cart, additional benefits can be reaped by verifying the medication against the AIMS. The medication should be linked to a predetermined list of medications (eg, surgical case preference list) that serves as an automated double-check for the anesthesia provider. Then, at the end of the case, the AIMS can queue up the amount of controlled substance waste so that the provider and co-signer can verify and sign off on waste before leaving the procedure room. Aligning automated functions with the AIMS helps to support and extend the safety already provided by using standard concentrations of medications, including prefilled syringes.

Choosing an anesthesia medication management system that includes a small printer and bar-code reader at each anesthesia workstation is optimal. This ensures that medications can be scanned for identification, and fully compliant, waterproof syringe labels (ie, smart labels) can be printed and affixed in real time.4 Because it remains impractical to utilize ready-to-use prefilled syringes for 100% of anesthesia medications, the automated label printers serve an important role. Such syringe bar coding can be integrated with the AIMS so that at the time of administration, the bar code is scanned to confirm not only the drug name and concentration, but also the patient’s allergies (if any), if the syringe has expired, and if the syringe has already been used for another patient. These safety features also can be applied to ready-to-use prefilled syringes.4

An AIMS, along with automated anesthesia carts, is critical to a fully integrated and automated medication use process. Nevertheless, KLAS research shows that in 2012 fewer than 300 facilities were using or implementing an AIMS.5 Although this represents a 35% increase in the number of provider organizations contracting for AIMS since 2011, many opportunities remain to automate the OR environment.5

Conclusion
Implementing automated anesthesia carts proved to assist SLH in achieving its 10 OR medication use process goals. In addition to complementing our existing hospital-wide, point-of-care medication use process, the system helped to ensure safety and balance access to needed medications with the security and control required for regulatory compliance and to prevent diversion. Not incidentally, such a system also can help cut waste and save considerable time and money.We will continue to focus our efforts on integrating our cart automation and AIMS to achieve the next level of improvements in our OR medication use process.

Mark Steinbeck, RPh, MBA, is the pharmacy operations manager at St. Luke’s East Hospital in Lee’s Summit, Missouri. Previously, he was pharmacy operations manager at Saint Luke’s Hospital in Kansas City. Mark received his BS in pharmacy from the University of Missouri – Kansas City School of Pharmacy in 1994 and his MBA from Baker University School of Professional and Graduate Studies in 2002. He was an adjunct clinical instructor in the division of pharmacy practice and administration in 2010. Mark has presented at the state and local levels on recruitment and automation. His professional interests include hospital operations and medication safety.