Planning and executing a pharmacy renovation can be a challenging pursuit, particularly when it must occur while the pharmacy maintains normal operations. A few years ago, Flagstaff Medical Center (FMC), a 267-bed tertiary care medical center and Arizona’s only level-one trauma center north of Phoenix, replaced its carousel technology with a new automated drug storage and retrieval system. This launched a 4-year endeavor to completely renovate the pharmacy, including adding about 200 square feet, without ever taking pharmacy services off-line.

FMC, which is nationally accredited by DNV Healthcare, Inc, provides general medical and surgical care, including heart surgery programs, EDs, neonatal and pediatric intensive care, and psychiatric care. Prior to renovating, the pharmacy was 3100 square feet. Although the renovation added only 200 new square feet, an additional 1100 square feet was assumed across from the pharmacy for office space for seven employees and a conference room. This freed up an additional 650 square feet of space within the pharmacy that allowed us to comfortably and efficiently accommodate daily shifts of 10 staff pharmacists and nine technicians who produce over 300 compounded sterile products daily for patient use, verify all applicable elements for over 2500 unique medication orders per day from providers, and perform 400 to 500 medication dispensing transactions per day for ADC refills and patient-specific orders.

The last pharmacy remodel occurred in the late 1990s (see PHOTOS 1 and 2). At that time, the pharmacy medication distribution system centered on ADCs on the units, to which carousel technology was added in 2005. When the lease contract on the carousel system was due to expire, our choices were to purchase an updated carousel system or explore alternative technologies.

Click here to view a larger version of these Photos

In deliberating which way to go, we considered various factors, such as time since the last pharmacy renovation, the workflow processes we had developed using our carousel, improvements in workflow that could occur through implementing new technology, and the extent of renovation that would be necessary. While the carousel automated our inventory, it permitted only one operator to perform a single function at a time, which created workflow bottlenecks in our busy environment.

To offset this challenge, we chose a five-module system with two operator stations and, not incidentally, a space requirement three to four times larger than that required for our carousel. This prompted a four-year undertaking that tested our ability to plan, coordinate, and execute a major renovation while keeping the pharmacy open, productive, and secure.

Planning and Design
Once FMC’s capital budget included funds to purchase the new drug storage and retrieval system (FY 2012), we began due diligence and site visits to determine what renovation would be required. Northern Arizona Healthcare, our parent company, is a Lean and Six Sigma system, so increasing efficiencies by process improvement and decreasing waste is a core value. As a result, we decided our renovation should do more than simply accommodate a technology purchase; it also should improve workflow and exceed USP <797> cleanroom specifications and functionality.

The hospital’s capital budget included funds to embark on a complete renovation in FY 2013. The design phase started in June 2013 after we signed the agreement to purchase the new drug storage and retrieval system. We decided early on to hire the same company that designed our last remodel, as their breadth of services—design, consulting, and architectural—complemented our needs.

Ordering new technology requires significant lead-time. Allow 9 to 10 months from the time of order until the time the finished product arrives on site. Thereafter, budget an additional 4 to 5 months to assemble the technology on the premises, build the software file, test the system, stock it with product, train the staff, and go live.

Our design team included the hospital’s facilities and engineering departments, a hospital architect, a contractor who does most of the hospital’s internal construction work, and representatives from the design company and the manufacturer of the drug storage and retrieval system. We included the manufacturer to make sure the area designated for the equipment was renovated to the required dimensions, electrical power, use of nitrogen gas, and other specifications. We also sought input from Northern Arizona Healthcare IT staff, to ensure the necessary interfaces were in place between the ADCs, the electronic health record (EHR), the drug wholesaler purchasing software, and the drug storage and retrieval system software.

Our design and manufacturing partners visited onsite to observe our operations, and we began to generate the floor plan (see FIGURE 1). We started by considering major elements, such as the main pharmacy and IV room layouts and where to relocate a bathroom and break room. Because we needed to work within our space during remodeling and keep our carousel system operating until the project was complete, we designed our renovation to occur in five phases (see FIGURE 2): 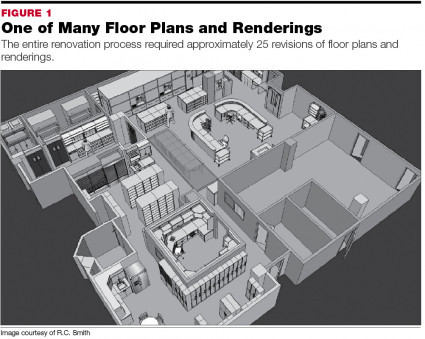 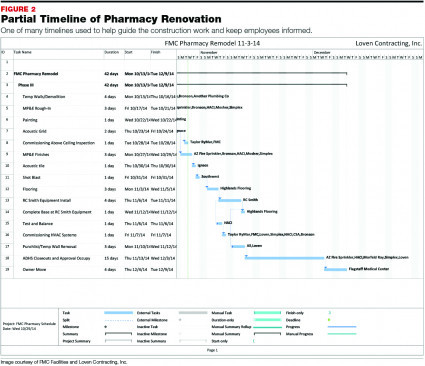 Construction
The main funding for the renovation was approved in FMC’s 2014 FY capital budget. Construction began in February 2014 and was completed in December. Throughout those 10 months, our team met weekly to ensure timelines were maintained. While the contractor worked in blocked-off sections of the pharmacy, the pharmacy staff continued to operate in the areas that were still available to us. As these sections changed, we continuously moved drugs, supplies, technology, and workstations.

Because of the complexity of the project, it was important that everyone involved understand the timing of each element within each phase. We prepared detailed graphics of the timelines, then made changes as necessary. Some of the phase decisions had to be coordinated with city, state, and health department building inspectors.

To ensure that the renovated pharmacy would meet our needs, design meetings were held during every phase. Plans were submitted and revised multiple times; however, in order to meet our deadlines, tweaking the design had to be limited to ensure our contractors could complete the work on time.

The technology upgrade was a central focus of the project. Ideally, we would have removed the carousel system, renovated the space, and then installed the new drug storage and retrieval system. But because operating without drug retrieval technology for 5 or 6 months was not an option, we left the carousel running throughout the renovation and worked around it. Ultimately, we used both our old and new systems in concert for 2 days and did not shut down the carousel until we were certain the new equipment was installed successfully.

Lessons Learned
Storing and Securing Medication
A primary consideration for any pharmacy director during renovations is to maintain the security of the drug supply. Our construction company erected temporary walls that prevented unauthorized admittance, while providing staff access to equipment and supplies that they needed (see PHOTO 3). During the renovation we found it useful to store our drug supply on wire shelving with wheels, which allowed us to repeatedly relocate inventory easily. Initially, we made the mistake of putting some stock on fixed shelving; those products then had to be moved twice. 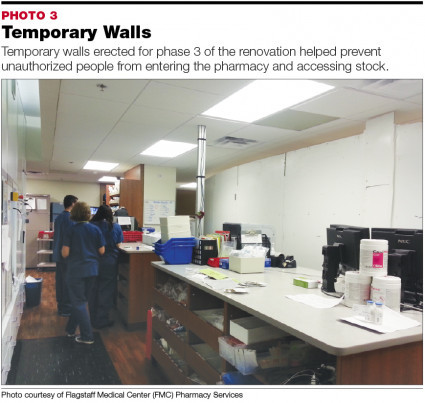 Click here to view a larger version of this PhotoP

Providing Data Access
Ensuring that pharmacy staff has phone and data access is an important consideration. We have up to three pharmacists working in the main pharmacy at any time, so three workstations are required. In some cases, the IT staff and field services group installed temporary network drops and phone jacks.

Supportive Communication
Communicating with our staff, whose workspace was disrupted for 10 months, was critical. We updated the construction schedule weekly so everyone was aware of the renovation status. The most dramatic changes occurred when we moved from phase to phase. We identified and discussed these and all disruptions at our daily 9:00AM huddle staff meetings.

For example, the renovation required that we move our unit dose packager, with all of its supplies, three times. At one point, the staff had to exit the pharmacy and enter by another door to access the packager.

We also learned to include the staff in decision-making that affected the utility of their workspaces. Staff input helped us examine and fine-tune many details. For example, would a file cabinet, drawer, or shelf work better in a particular space? Is the elevation of the light fixture appropriate for the tasks that will be  conducted there? How many lockers do we need, and what size is optimal? Exactly where are data drops, power outlets, and phone jacks needed? The answers to these questions were sometimes gleaned through trial and error.

Conclusion
To say that it is difficult to keep a hospital pharmacy running through a major renovation is an understatement. However, careful planning, along with choosing the right partners and vendors, will alleviate a significant amount of anxiety. Keep in mind that your staff may feel pressured during a major renovation; as such, it is key to continuously reinforce and communicate throughout every phase of development, to help all involved visualize the benefits of improved space and workflow that will be realized at the conclusion of the project.

Richard Mendribil, BS, PharmD, has been the Health System Director of Northern Arizona Health for 5-and-a-half years. Previously, he was Director of Pharmacy and Support Services for Seton Medical Center and Seton Coastside Hospital in the San Francisco Bay Area for 20 years. He also led the Daughters of Charity Health System Pharmacy Directors Council. Rich earned his undergraduate degree from the University of San Francisco and his pharmacy degrees (BS and PharmD) from Creighton University in Omaha, Nebraska.

Mark Jensen, PharmD, has been the inpatient pharmacy operations manager at Flagstaff Medical Center for the past 3 years. Previously, he was a clinical staff pharmacist at Flagstaff Medical Center for 2 years. Mark earned his PharmD from the College of Pharmacy at Glendale, Midwestern University and was a pharmacy practice resident at Scottsdale Healthcare in Scottsdale, Arizona.