The Centers for Disease Control and Prevention (CDC) is recommending a series of two pneumococcal vaccines for all individuals aged 65 years and older, and Medicare Part B coverage has expanded to align with this change. Vaccination with 23-valent pneumococcal polysaccharide vaccine (PPSV23), as well as 13-valent pneumococcal conjugate vaccine (PCV13), is intended to enhance protection for seniors against community-acquired pneumococcal pneumonia (CAP).1

In light of these changes, steps for pharmacy to consider include:

Evidence Supports Two Vaccines
Pneumococcal disease is responsible for 18,000 deaths of adults aged 65 years or older annually in the United States, according to the CDC.2 Both PPSV23 and PCV13 provide protection against the Streptococcus pneumoniae serotypes they contain.1 PPSV23 has been shown to be 50% to 85% effective in preventing invasive pneumococcal disease caused by the 23 strains it covers in adults with healthy immune systems.2 It provides coverage against pneumococcal meningitis and bacteremia, but limited protection against CAP.2

In 2012, the CDC’s Advisory Committee on Immunization Practices (ACIP) recommended PCV13 for all adults aged 19 years and older with compromised immune status or certain other conditions, but deferred a decision on routine administration for seniors until additional evidence could be obtained.1 In August 2014, ACIP reviewed data from a randomized placebo-controlled trial conducted in the Netherlands evaluating PCV13’s efficacy against CAP among 85,000 adults aged ≥65 years. PCV13 showed 75% efficacy against vaccine-type invasive pneumococcal disease and 45% efficacy against vaccine-type CAP.3

Two other randomized studies showed vaccination with PCV13 to be at least as effective as PPSV23 in inducing an immune response in older adults. One study measured geometric mean antibody titers (GMTs) to the 12 serotypes common to both vaccines and to serotype 6A, which is unique to PCV13, in adults aged 60 to 64 years with no previous pneumococcal vaccinations.4 GMTs associated with PCV13 administration were comparable to or higher than those associated with PPSV23. In a study of adults aged ≥70 years who had been vaccinated with a single dose of PPSV23 at least 5 years previously, responses to PCV13 were comparable to PPSV23 for two serotypes and higher for 10 serotypes.5

Updated Vaccine Regimens
For adults aged ≥65 years who have not received any pneumococcal vaccines or whose previous history is unknown, ACIP recommends first giving PCV13 (see SIDEBAR), followed by PPSV23 within 6 to 12 months. If this window is missed, PPSV23 can be given later than 6 to 12 months after PCV13. 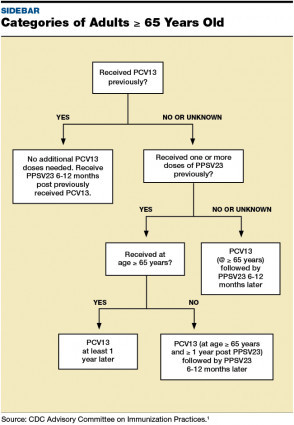 Click here to view a larger version of this Sidebar

Vaccine Safety and Adverse Events
Pneumococcal vaccines are considered safe, having gone through years of testing, FDA approval, and ongoing safety monitoring.2 In clinical studies, the overall incidence of serious adverse events with a dose of PCV13 or PPSV23 was the same, between 0.2% and 1.7%.1

Common adverse reactions to PCV13 in adults include redness, pain, and swelling at the injection site. Fatigue, headache, chills, decreased appetite, generalized muscle pain, and joint pain also have been reported.1 Life-threatening allergic reactions occur rarely. PCV13 should not be administered to anyone who has had a life-threatening allergic reaction to PCV13, the pneumococcal vaccine PCV7, or any vaccine that includes diphtheria toxoid.2

Because the ACIP recommendations are specific to vaccine type, CMS says providers should take into consideration a patient’s pneumococcal vaccination history. For example, a beneficiary aged ≥65 years who received PPSV23 at least 1 year ago should receive PCV13 as the second vaccine.

CMS notes that beneficiaries may receive the vaccines on request, without a physician’s order. Medicare administrative contractors (MACs) may adjust claims for pneumococcal vaccines administered on and after September 19, 2014, if brought to their attention.6

As PCV13 has been used previously in younger populations, the CPT code for PCV13, 90670, should exist in billing systems. Billing of PCV13 should follow the same process as that for PPSV23, with the exception of the different CPT code.

Stocking and Storage
As a result of this change, clinics and pharmacies with primarily adult populations should begin stocking PCV13. The quantity stocked should be based on past utilization of PPSV23, but, generally, stocking a 3-week supply allows for order turnaround and provides a 1-week safety net.

PCV13 must be refrigerated and stored between 36 and 46°F (2 and 8°C); daily checks are necessary to assure this temperature is maintained. Avoid freezing the vaccine, as freezing destroys it. Lastly, pharmacies may want to review the adequacy of their refrigerated storage space; adding PCV13 to your refrigerator during influenza season, for example, may necessitate the purchase of additional vaccine refrigerators.

Lee Mork, MBA, MS, RPh, has been the director of pharmacy for Allina Hospitals and Clinics for the last 8 years. In this role, he is responsible for the ambulatory operations, including medication policies, pharmaceutical purchasing, medication storage and handling, patient medication assistance programs, and prescription technologies for 63 primary care clinics. Lee’s professional interests include prescription technologies and vaccines.