Have you ever considered how the Port Authority repairs the George Washington Bridge—connecting New Jersey to New York City—during rush hour? The answer is: they don’t, which is why the bridge is riddled with potholes. To properly fix the roadway, the bridge must be shut down. But closing down even one lane on a bridge that serves almost four million vehicles per month would result in miles of backups lasting for hours.1

Now consider bringing a sterile products cleanroom up to USP <797> and proposed USP <800> standards without shutting down operations or limiting patient care services. An increasing number of hospital pharmacies are facing this exact challenge, particularly as the practice of converting physician office practices from private to hospital provider status is becoming widespread. In order to achieve compliance with USP <797> and soon-to-be <800> standards for compounded sterile preparation (CSP) production, major remodeling of the compounding facility often is necessary. The difficulty lies in the number of patients that are reliant on these sites for their treatment, such as chemotherapy. Closing a site, even temporarily, not only creates inconveniences, but also may make it impossible for some patients to obtain care.

The following case studies illustrate dilemmas that are all too common in hospital pharmacy’s endeavors to produce safe, compliant CSPs, while simultaneously exploring creative solutions.

Case 1: Major Renovation to Achieve Compliance
At one busy site, the cleanroom required a complete renovation to achieve compliance with USP. The hospital had purchased a physician office practice, which operated with an externally vented biological safety cabinet (BSC), but without an ante-room, buffer room, or HEPA-filtered air in the spaces surrounding the vented hood. In addition, there was significant personnel traffic, accessing medications and entering the adjacent laboratory, in the immediate vicinity of the CSP area.

Initially, a two-phase solution was planned. First, the area would be physically closed off, access would be restricted to pharmacy personnel only, and protective garb would be provided. Second, HEPA-filtered air was to be installed into the space. However, it became evident that the area could not meet even ISO 8 classification; thus, a complete renovation was necessary to achieve compliance with current USP standards.

Proposed solution: Had a mobile cleanroom been an option, the pharmacy could have averted the many weeks spent building the temporary cleanroom, and instead dedicated the time and resources to completing the permanent cleanroom construction project. Likewise, configuring the mobile unit to meet the projected workload would have resulted in significant savings and avoided wasted material and resources. 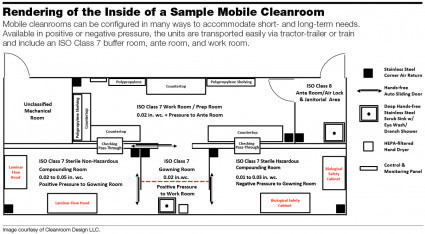 Case 2: Unnatural Disasters
Several times in the past year we have seen hospitals and clinics shut down because of excessive snow, hurricanes, tornados, and other natural disasters. When these interruptions extend beyond the initial shut down, the result is delays in patient care. In addition to the challenges weather can bring, there also is the peril of unnatural disasters. Because most pharmacies are located in the hospital basement, flooding and sewer back-ups are potential risks to the pharmacy, and certainly the cleanroom. When disaster strikes, the affected facility typically must rely on another hospital in the system or a neighboring institution to provide CSPs until they can recover.

In one recent case, the hospital pharmacy was located in the sub-basement of the building. Excessive rain over a short period of time caused the sewer system to back up and flood the pharmacy. The sewage water entered the cleanroom and contaminated the space. The cleanroom was not <797>-compliant; thus, water infiltrated gaps in the flooring tile and cracks in the epoxy-coated walls. The cove moldings separated from the wall, and the water contaminated the lower filter in the BSC.

The pharmacy was shut down for several days to dry out, and the drugs that had been stored on the floor and lower shelves were discarded. Even so, mold developed in the cleanroom, requiring a major renovation. As a stopgap measure, the health system’s main hospital, which was 10 miles away, provided all the CSPs via courier, but this approach was expensive and delays were significant. Because the renovation was undertaken on an emergency basis, the construction was a high-cost endeavor that required several months to complete.

Proposed solution: A mobile cleanroom solution could have been installed at the facility and available for service when the pharmacy reopened. With lower costs and fewer delays, customer service could have been maintained and the pharmacy service disruption would not have been apparent. With a reliable backup system in place, the hospital would be under less pressure to complete the construction and could take more time in the bidding process to ensure the cost-effectiveness of the project.

Similarly, a hospital pharmacy was located in the basement with the kitchen directly above the cleanroom. Secondary to a backup in the garbage disposal, a major pipe burst in the kitchen, which resulted in water and garbage flooding the cleanroom through the ceiling tiles. Major repairs were necessary to rebuild and recertify the cleanroom. In the interim, a sister hospital assumed production of the CSPs, shipping them to the hospital via courier until the renovation was complete.

Proposed solution: In this situation, a mobile cleanroom could have been in place within 48 hours, providing full service without any of the delays, lost medications, and security concerns that are intrinsic to courier service.

Case 3: Rapid Expansion of Services
In this case, a health care system purchased a physician office practice with the intent of expanding services and moving to a new site within a year. Because this practice did not have a <797>-compliant cleanroom, CSPs were provided from a larger sister site with a compliant cleanroom located five miles away. The smaller site was tasked with increasing its number of infusion chairs, but its service level was limited by its dependency on the alternate compounding site. Even if it were economically feasible to build a cleanroom at the smaller site for 1 year’s usage, there was no space available to accommodate such an expansion.

Proposed solution: In this situation, installing a mobile cleanroom at the smaller site would ensure the provision of timely service, while also allowing for an expansion of services. A mobile cleanroom could be anchored in the parking lot with a pass-through tunnel connecting it to the office building. Instead, this site remains reliant on its sister facility to provide all CSPs. The success of this approach is dependent on excellent communication, advance ordering, and reliable courier service. As a result, the facility has curtailed the expansion of services because the courier service and other satellite facility can maintain only the original level of service and patient volume.The Mobile Cleanroom as a Solution Just as mobile MRIs have become common fixtures in hospital parking lots and office space often is transferred into mobile units during construction projects, the benefits of flexible design can be extended to the cleanroom. Mobile cleanrooms can be configured in many ways to accommodate short- and long-term needs. They are available in positive or negative pressure. The units are transported via tractor-trailer or train and include an ISO Class 7 buffer room, ante room, and work room. The HVAC system is self-contained and includes an air lock at the point of entry to ensure the sterile portions of the unit are not entered from an unclassified space. With a microprocessor-based control system, room temperature, relative humidity, and differential pressures are maintained and monitored. Remote monitoring via digital cameras also is an option. Mobile units can be leased or purchased as need dictates. Larger health systems may consider purchasing a unit, as the likelihood that it will be needed increases with the number of infusion centers in operation. Finally, the mobile unit can be used to train new employees or serve as the location for semi-annual aseptic technique testing—activities that can be tricky to schedule during normal business hours. In both of these situations, the mobile cleanroom can be used to avoid disruption and avert the risk of contamination within the facility’s own cleanroom.Creative solutions are required to resolve the myriad challenges pharmacy faces today. Utilizing a mobile cleanroom as a stopgap measure during a construction project, or to deliver consistent services in the aftermath of a disaster, allows pharmacy to maintain operational effectiveness while ensuring that patients are well cared for. n