Over the past 10 years, hospital participation in 340B has soared. In 2005, just 10% of hospitals had applied and qualified to serve as covered entities; since then, we have seen a five-fold increase in program participation. This year, 340B participation became a majority practice for the first time, as 51% of all US hospitals are now part of the program. This growth reflects both the value the program brings to those facilities caring for underserved populations, as well as the expanded access to the program resulting from the Affordable Care Act. Because more facilities are now entitled to these discounteddrug prices, we expect to see further expansion in 340B participation. The program’s evolution also has triggered stronger regulatory oversight, and we will be watching to see the effects of HRSA’s increasingly frequent audits, particularly with respect to contract pharmacy arrangements. Likewise, Congress has indicated an interest in monitoring the program more closely, and may soon weigh in on 340B payments as they relate to Medicare Part B outpatient drug payments. 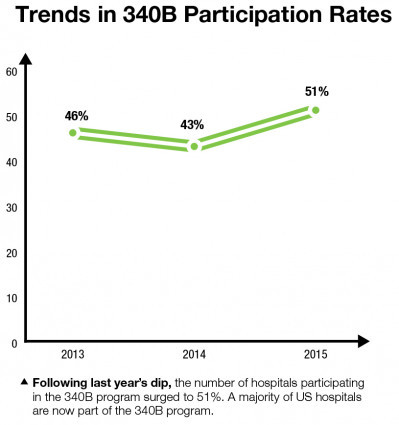