Preventing Diversion in the ED

Although drug addiction in the general population is well studied and documented, limited epidemiologic surveillance data exist on addiction and drug diversion patterns among health care workers (HCWs). In fact, the dearth of evidence might suggest that drug diversion among HCWs is uncommon or poses no harm, but, unfortunately, the opposite is true. The rates of opiate and benzodiazepine abuse, for example, are higher among HCWs than among the population at large.1 One possible reason for this is their almost ubiquitous access to, and extensive knowledge of, controlled substances. It is not unusual for HCWs to conflate their understanding of therapeutic and toxic doses, pharmacokinetics, and addictive potential with a false sense of control over these agents.

Drug diversion by HCWs poses significant risks to the diverter, the hospital, and to patients. For example, patients may receive incorrect medications or lower doses than prescribed, resulting in inadequate pain control or sedation. Drug diversion also can confer a significant risk of infection. In one case, 45 patients contracted hepatitis C from a radiology technician who was injecting himself with fentanyl and reusing the syringes during patient procedures.2 As a result of this one HCW’s diversion, almost 5,000 patients were potentially exposed to, and required testing for, hepatitis C.3

Because of the potential risks, it is important to be able to identify drug diversion and prevent it whenever possible. Although diversion of controlled substances receives the most attention, diversion of non-controlled agents, for example, by the nauseated employee who pockets an ondansetron, or the worker who snatches sildenafil for street sale, is no less important and should be addressed in hospital drug diversion policies.

Detecting Diversion
Identifying drug diversion is challenging, as anyone, regardless of theiracademic degrees and accomplishments, work ethic, or personality, canbecome addicted to controlled substances. An impaired HCW often appears normal and may maintain a high level of productivity, particularly in the early stages of addiction. To identify a potential diverter, management must keep an open mind, remove any prejudices, and pay close attention to subtle changes in behavior, such as:

HCWs can divert controlled substances in countless ways. Common methods include retaining wasted product for future use or removing multiple tablets or capsules when only one is ordered for the patient. Despite the risk of needle exposure, diverters also have stolen sharps containers to retrieve discarded drugs (see TABLE 1).

Preventing Diversion
A multifaceted approach, including use of technology, policy adherence, staff education, and robust oversight, is necessary to prevent diversion. Most of the technology aimed at drug diversion-prevention pertains to ADCs. For example, individually locking bins have been available since ADCs were introduced into hospitals. More recently, diversion-detection software has become available, which allows a hospital to record typical usage and waste patterns for specific areas or ADCs in the hospital. These data then can be used as benchmarks for individual staff and groups of employees, to highlight and flag aberrance in practice patterns.

For example, imagine two ED ADCs have a combined typical usage of 100 units per day of hydromorphone 1 mg. Sixty percent typically comes from ADC 1, and 40% from ADC 2. The average nurse pulls 10 units per day, with a standard deviation (SD) of 2. Nurse Bob’s average pull is 12 units per day. Over a short period, the ADC software report shows an increase in Bob’s withdrawals per day to 18 units (SD >3). In addition, he has changed where he pulls hydromorphone; although he formerly used ADC 1 exclusively, he now alternates between the two machines. As a result, the report is flagged, and a review is initiated.

It should be noted that while available software helps in preventing diversion, facilities should maintain a human component when monitoring ADCs and avoid relying solely on software reports. Hospitals also should limit access to ADCs; HCWs should use only the ADC at their primary workstation. In addition, facilities should update access to ADCs regularly as personnel move to different primary work areas. Passwords should be changed at least every 6 months, and personnel must be trained to never share their passwords. Wasting must be witnessed, and should occur at the time the drug is removed from the ADC.

Diversion awareness is important for all hospital employees. Education should be included in all employee orientations and continued, at a minimum, as part of the institution’s annual competencies. The curriculum should include the risks of addiction, common diversion behaviors, the process for reporting suspicious behaviors, and a review of the hospital’s controlled substances policy.

Helping the Addicted HCW
Some health care systems are reluctant to report diversion or offer drug addiction support for fear of negative publicity, added scrutiny by regulatory agencies, or employee retaliation. However, HCW drug addiction is a treatable disorder with a high treatment success rate. Studies show that the abstinence rates of various groups of chemically dependent HCWs who receive treatment for addiction exceed 80%, which is significantly greater than that of the general population.4

Conclusion
Although the dearth of evidence might suggest the opposite, controlled substance addiction and drug diversion actually are quite common among HCWs. As any employee can divert drugs, it is the responsibility of all hospital employees to be aware of drug diversion practices and immediately report suspicious behavior. A number of tools are available to aid in the detection of drug diversion, but tools are successful only when humans remain engaged in the process and use them correctly. Once diversion with the intent to use is proven, it is imperative that the institution offers the diverter entry into a treatment program for the benefit of the diverter and for the safety of the public at large.

Philippe Mentler, PharmD, BCPS, is a senior medication management consultant with VHA, Inc. He joined VHA after more than 10 years as an emergency department pharmacist. Philippe received his doctorate of pharmacy from Ernest Mario School of Pharmacy, and completed a PGY1 general practice residency at the University of Illinois at Chicago and a PGY2 residency in emergency medicine at Robert Wood Johnson University Hospital in conjunction with the Ernest Mario School of Pharmacy.

CASE STUDY 1
The Moody Veteran Nurse
A skilled and trusted ED nurse with more than 20 years of experience was caught diverting injectable opiates. He admitted
to diversion and to his addiction only after another nurse witnessed multiple wasted medications in his pocket. His addiction to pain medications began after a simple surgical procedure the prior year. When his physician limited his pain medications, he began diverting from the hospital. The nurse had been taking on extra assignments and completing other nurses’ tasks in order to increase access to opiates, and he wore long sleeves to hide track marks from multiple daily injections. In retrospect, staff members noted that he tended
to have mood swings during the workday.

CASE STUDY 2
Medication Substitution
A nurse asked the emergency pharmacist to speak with an irate patient, a regular at the hospital and a known drug seeker. The patient complained that the generic 512s (a street name for oxycodone/acetaminophen, derived from the fact that the number 512 is imprinted on the branded 5 mg Percocet tablet) prescribed do not work. This was the third time in a week that the patient was in the ED complaining of not receiving pain relief from the hospital’s 512s. The following day, a pharmacy technician reported to the ED pharmacist that he had to replace a large number of missing prednisone 50 mg tablets for the second time within a week. Upon initiating an investigation, the ADC report on prednisone showed that one nurse performed a cancelled transaction every time a discrepancy was noted (several more prednisone discrepancies were identified during the investigation). When the nurse was confronted, she admitted filling the oxycodone/acetaminophen orders with prednisone tablets prior to patient administration. She removed the tablet from its unit-dose
container and placed it in a unit-dose cup prior to entering the patient’s room. Prednisone 50 mg is almost identical in size and appearance to 5 mg oxycodone/acetaminophen. 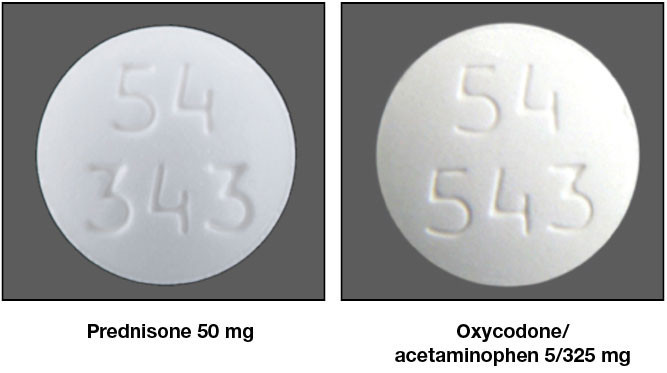 CASE STUDY 3
Mishandling Confirmed Diversion
A pharmacist with a history of brief employment in numerous pharmacy settings was hired to staff the evening shift of the central pharmacy. Within 3 months, discrepancies in the controlled substances cabinet were noted. One evening, a pharmacy technician witnessed the pharmacist pocket several oxycodone tablets. The technician reported the incident directly to pharmacy administration. The pharmacist was immediately offered the choice to resign, which she eagerly accepted. She then went on to work in a retail pharmacy where she was caught on video stealing a handful of hydrocodone/acetaminophen from a 1000-count bottle. She was again offered the option to resign from that position, and accepted. The actions of both of these facilities—which are intended to serve and care for the public—place the general population at continued risk and leaves adrift a person with a treatable disease. Instead, the addict should have been offered access to an addiction treatment program, and the offenses should have been reported to the appropriate authorities.

Managing PPE and Supplies in the Pandemic 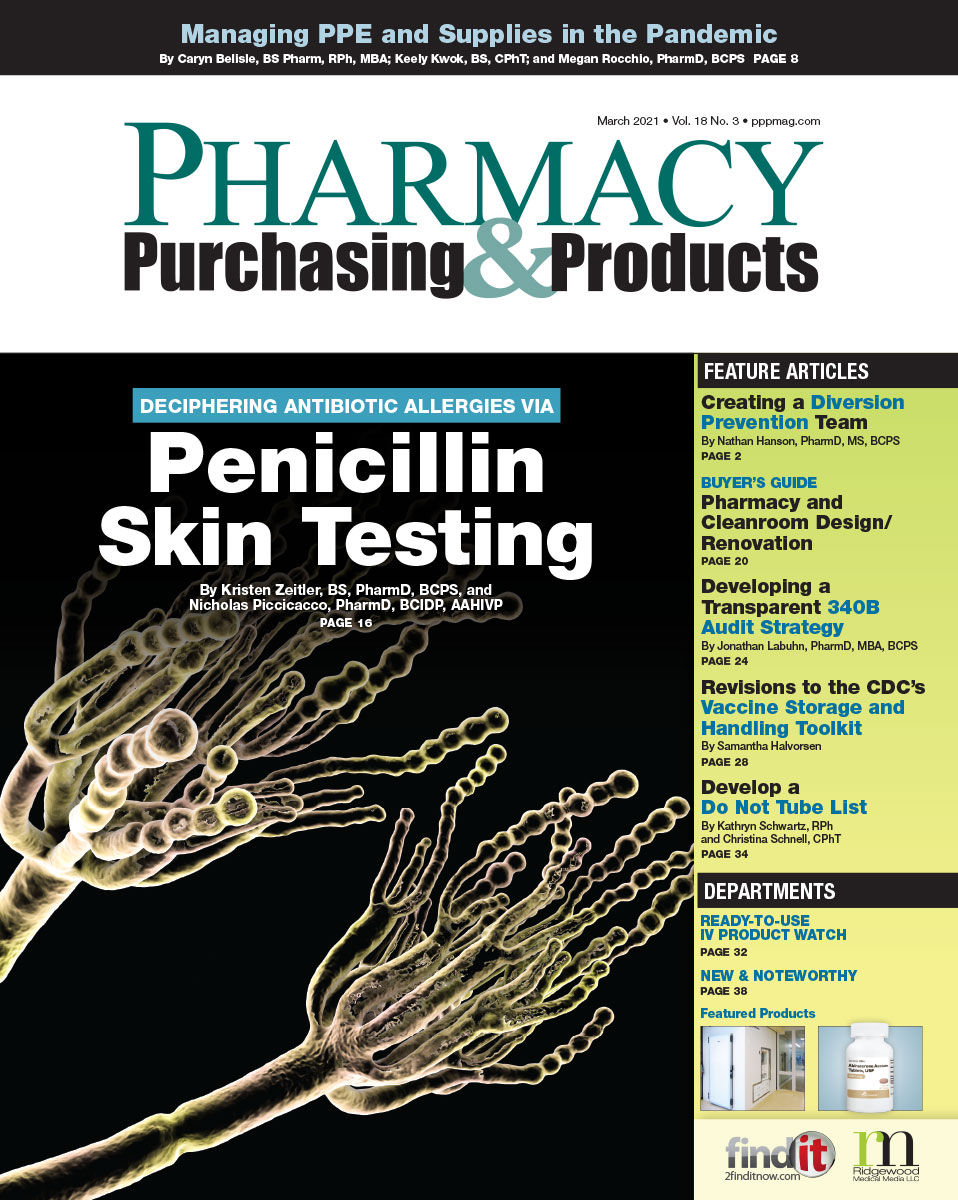