Patient safety is the primary consideration when compounding sterile preparations and human interaction poses the greatest risk to the process. This risk is derived not only from any lack of knowledge or disregard of institutional policies and procedures, but by our design; humans harbor an incredible amount of corporeal microorganisms and are constantly shedding skin particles containing these microorganisms into the air. Compounded sterile preparations (CSPs) can easily become contaminated when these skin particles or other particles present in the environment inadvertently end up in the preparation being compounded, either from settling out of the ambient air onto critical sites or from critical sites coming into contact with contaminated hands, objects, or surfaces (see CASE EXAMPLE 1).

A well-designed cleanroom is the first step toward minimizing the risk of contamination to CSPs. A typical cleanroom consists of an ante-area and a buffer area; a negative pressure buffer area also may be included for compounding hazardous sterile preparations. Under the current USP standard, other configurations are permitted, but these may require a particular type of primary engineering control (PEC) or restricting of the beyond-use date (BUD) assigned to the CSP.

CASE EXAMPLE 1
Human Contamination
A CSP showed positive bacterial growth at day five of sterility testing. Solution had been filtered with a repeater pump and packaged into one hundred 10 mL vials. Investigation revealed that multiple rows of vials were positioned in front of the HEPA filter in the LAFW, blocking first air. In addition, it is suspected that the compounder contaminated the sterile rubber stoppers when applying them to the vials with gloved hands rather than using sterile forceps. 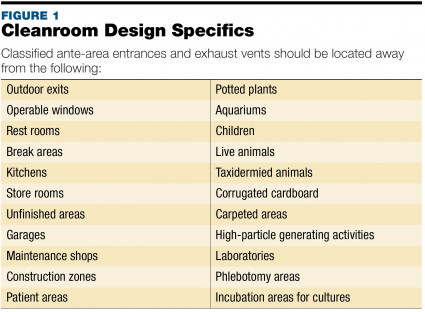 CASE EXAMPLE 3
Unexpected Contamination Sources
A CSP showed contamination with a bacteria found in urine. Investigation revealed a vent that supplemented air to the HEPA filter located immediately outside the rest room. The HEPA filter had not been checked for leaks.

Inside ISO Classified Areas
Within the cleanroom, the location of HEPA filters and air exhaust (or return) vents is critical. Particles may be removed from surfaces with cleaning, but particles in the air can only be removed by exhausting air from the room. Thus, air should exhaust in a manner that pulls particles away from preparation areas or compounding areas to reduce the potential for those particles to settle on critical sites.

PECs and work surfaces within the buffer area should be located such that airborne particles are swept away without interrupting the PEC’s airflow. Human particle shedding is inevitable and a well-designed cleanroom will minimize the bioburden created simply from our presence. Careful examination of the location and layout of the cleanroom, as well as walking through each process to identify areas of concern and possible failure points can significantly reduce the potential for problems downstream.

Proper PEC Functionality
Ensuring the cleanroom and other PECs are functioning properly is the next step to minimizing the risk of contamination to CSPs. Integral to this, cleanroom certification reports must be carefully evaluated for accuracy and completeness. It is not uncommon for certification reports to be missing required testing or to falsely state compliance with USP <797>. With this in mind, it is the pharmacist-in-charge or designated person’s responsibility to understand certification requirements.

Furthermore, PEC certification must occur under dynamic conditions by qualified individuals using calibrated equipment. Certification of the cleanroom should include airborne particle testing, measuring pressure differentials, determining air changes per hour, and monitoring the integrity of HEPA filters. Certification of individual PECs should include airborne particle testing, measuring air velocity, monitoring the integrity of HEPA filters, and showing unilateral air flow during dynamic conditions with smoke visualization studies. Keep in mind, there may be additional requirements depending on the type of PEC in use.

CASE EXAMPLE 5
Need for Dynamic Environment Testing
After a pharmacist stated, ”I’ve never had any problems with my cleanroom certification,” An investigation revealed the cleanroom was certified ‘at rest’ for particle count only. Retesting revealed multiple problems including insufficient air changes and excessive viable airborne particle count.

Environmental Monitoring
Environmental monitoring can help detect problems with cleanroom function, effectiveness of cleaning and disinfection procedures, personnel competency, and institutional procedures related to sterile compounding. According to current USP <797>, viable airborne particle testing (often performed as part of cleanroom certification) shall occur at least every six months and viable surface testing shall occur periodically. For both viable airborne particle testing and surface testing, sample locations in each ISO area should be chosen based on risk for contamination.

Media used in surface testing must include additives to neutralize the effects of disinfecting agents. Media that supports the growth of bacteria also must be used for both viable airborne particle testing and surface testing. In addition, pharmacies that compound sterile preparations using nonsterile chemicals or devices (high-risk level) need to use malt extract media or another medium that supports the growth of fungi for viable airborne particle testing. Viable testing results should be charted and tracked for adverse trends and all viable air growth must be identified to at least the genus level to help identify the cause of the growth, as well as the appropriate remediation.

Per USP <797>, highly pathogenic microorganisms (eg, Gram-negative rods, coagulase positive staphylococcus, molds and yeasts) can be potentially fatal to patients receiving CSPs and must be immediately remedied, regardless of cfu count, with the assistance of a competent microbiologist, infection control professional, or industrial hygienist. In addition, any cfu count that exceeds the determined action level needs to be investigated, the source of the problem eliminated, and resampling performed. Common sources of problems include:

Personnel and Process Issues Related To:

Conclusion
Patient safety cannot be ensured without understanding and complying with the requirements for sterile compounding. Thus, it is imperative that physical and environmental standards be in place. Furthermore, standard operating procedures form the foundation for training programs and good work practices, which in turn ensure safe, high-quality compounded medications. Pharmacy management needs to continuously monitor their operations, environment, and personnel for compliance, risks, and potential patient safety concerns.

Brenda S. Jensen, CPhT, CNMT, MBA, is the owner of Compounding Consultants, LLC. She helps compounding pharmacies achieve USP compliance and PCAB accreditation. Although Brenda is a member of the USP Compounding Expert Committee, the information presented in this article is her opinion alone and should not be construed as official USP standard. She can be reached via email at: brenda@compoundconsults.com.