The University of South Alabama Children’s and Women’s Hospital (USACWH) is among the few freestanding hospitals in the US dedicated specifically to the health care needs of children and women. Recently, the hospital expanded, adding a new pediatric tower, a new pediatric ICU, and additional private rooms in the neonatal ICU. Because the new ICU and NICU comprise the majority of the facility’s highest acuity patients, pharmacy administration recognized that it made sense to relocate the pharmacy from its cramped quarters in the old basement to the new pediatric tower, which would significantly increase pharmacy’s ability to provide effective care to these patients in a timely manner.

Constructing the New Pharmacy
The new tower was funded through multiple sources, including a bond issue, private donations, and the University of South Alabama Foundation. After funding was secured, USACWH began the process of choosing a vendor for pharmacy construction.

During meetings with the new tower architects, pharmacy administration realized a need for expertise in the area of pharmacy workflow dynamics and design. The goal was to create a fully functional, yet aesthetically pleasing space that could accommodate future growth and be reconfigured as the pharmacy’s needs changed. After reviewing bid proposals from three vendors on contract with the hospital’s GPO, pharmacy chose to move forward with the one that best fit the needs of the department. Determining factors included:

The construction process required several reviews, approvals, and final certification by government agencies, including the Alabama State Board of Pharmacy. Historically, the major challenge for staff members working in the old pharmacy was accomplishing their duties within an exceedingly cramped space. For example, there were insufficient administrative offices for the pharmacy director, the assistant director, and the clinical pharmacist. Likewise, pharmacist preceptors operated without a dedicated space for teaching and education. The department did not have a break room, staff lockers, conference or presentation meeting rooms, or restrooms. Additionally, there was no area to consult with other caregivers or even to spread out clinical references in order to fully review orders. Although the sterile products preparation area met USP <797> requirements, it was not large enough to handle CSP demand during peak times. The lack of space had become a hindrance to the provision of quality patient care, and because of this, the main goal in constructing a new pharmacy was to provide ample space and functionality (see PHOTOS 1 and 2). 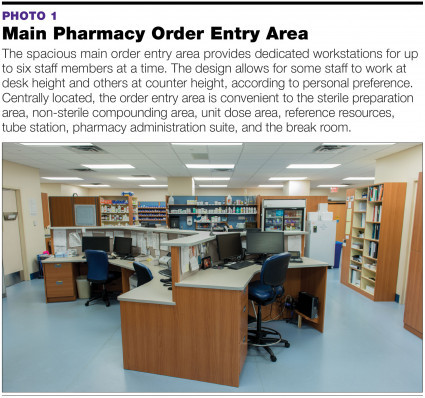 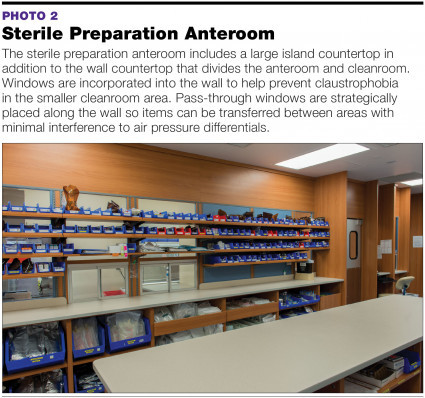 The new pharmacy was designed with sufficient space to support our workflow, (see PHOTOS 3 and 4) while also providing additional storage space, ample room for additional medication refrigerators, and access to the newly installed pneumatic tube system (see PHOTO 5). A secondary goal was to merge our NICU satellite pharmacy with the central pharmacy, which ultimately enabled better staff utilization and improved communication between pharmacy staff dedicated to the NICU and those serving other areas of the hospital.

Multiple parties were integral to the success of the renovation project, including the architects, the general contractor, specialized contractors (such as the HVAC experts who ensured compliance with USP <797> requirements in the sterile products area), programming and equipment consultants, the design and casework company, and many USACWH departments (such as facility management, IT, telecommunications, quality management, and, of course, pharmacy). 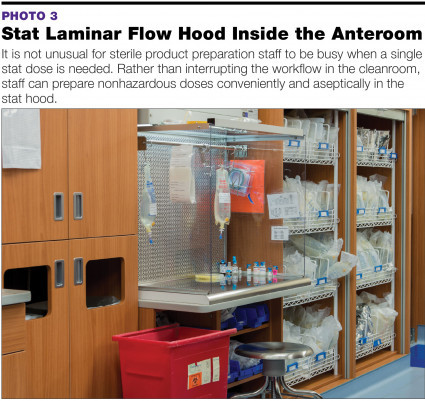 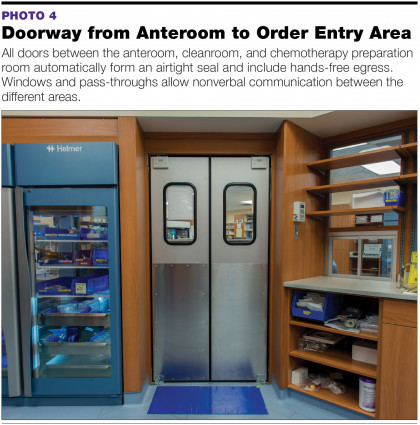 Lessons Learned
One of the most significant challenges encountered during the renovation was coordinating the work of multiple contractors and regulatory boards. Pharmacy was present for weekly scheduled meetings between the general contractor and hospital facility management leadership, which allowed pharmacy administration to provide direction before work was undertaken. Open communication was paramount between all parties, as misunderstandings and different interpretations of standards or requirements are not uncommon. We were fortunate to have project management teams working closely with the general contractor, who helped attest that subcontractors performed their work correctly and who sought input from the pharmacy when clarification was required.

The general contractor scheduled periodic meetings and walk-throughs with various governmental boards to avoid surprises during the final inspection. Pharmacy administration submitted plans to the state board of pharmacy and kept the inspector updated on the renovation’s progress. A thorough checklist was followed to ensure compliance with state, federal, and USP requirements.

Of note, balancing the airflow in the sterile products preparation area proved complex and required tremendous patience and commitment. HVAC engineers had to balance the temperature, air exchange rate through HEPA filters, and pressure differentials between rooms several times before all parties were satisfied that the system was operating correctly. 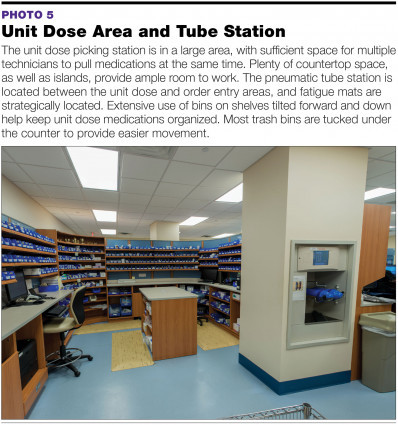 Benefits of the Renovation
All of pharmacy’s objectives for the renovation were met and the larger space facilitates an efficient workflow, which is the most significant benefit. Staff members now have the physical infrastructure necessary to perform their duties effectively, and pharmacists, technicians, and students are able to move about the department freely (see PHOTOS 6 and 7). At the same time, extraneous walking is purposely minimized as a result of the design, which mirrors the flow of information and processes, thus improving productivity and facilitating communication among staff. In addition, the new pharmacy provides heightened medication security while simultaneously improving accessibility.

A particularly pleasant benefit of the new workspace is the resultant boost in morale, as staff members now take greater pride in their work environment. Other health care providers have visited the new pharmacy department and complimented the improvements, further underscoring that staff involvement was key to the project’s success. Whenever possible, pharmacy administration sought input from pharmacy staff and included them in decisions that would affect their work. USACWH is pleased with the quality of the work performed by our design and casework company, whose expertise was integral to the success of the pharmacy renovation project. Pharmacy looks forward to utilizing the efficiency of this facility for years to come. 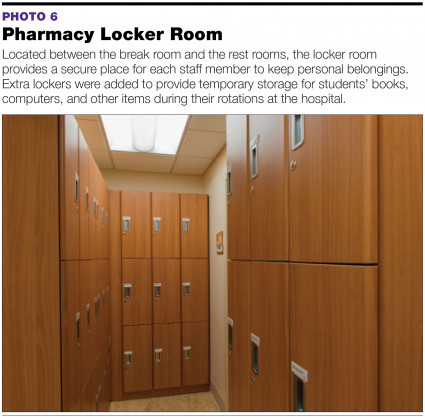 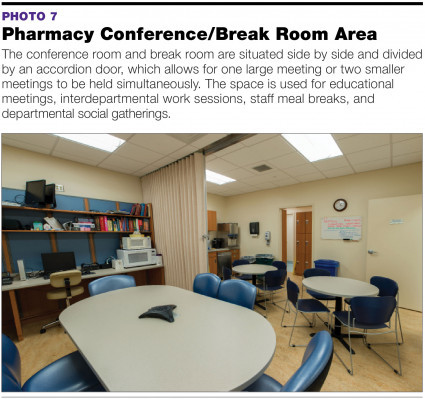