Clinical evidence clearly shows that compounding and administering hazardous drugs (HDs), including chemotherapy and antineoplastic drugs, poses a safety risk to staff who come into contact with these agents. NIOSH, ASHP, and ONS all have outlined levels of protection required to ensure health care staff are protected from exposure. Closed system drug-transfer devices (CSTDs) fit into a hospital’s safe handling practice by providing a closed barrier between the hospital staff and the HD. In fact, USP <800> Hazardous Drugs—Handling in Healthcare Settings, which will become enforceable on July 1, 2018, requires CSTD use for nurses administering HDs and recommends CSTD use for pharmacy staff members compounding these medications. 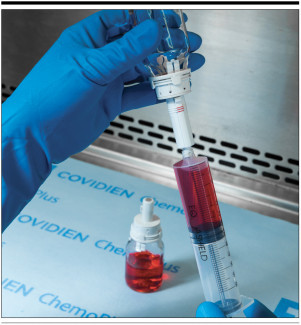 CSTDs have long been an integral component of the health system’s safe HD handling protocol. UNMH has been using a CSTD in both the inpatient and outpatient settings for preparing and administering HDs since 2010. In July 2015, we switched CSTDs and began using Equashield.

The main purpose for using a CSTD is to reduce staff exposure to HDs. While the best way to accomplish this goal would be to eliminate the use of HDs entirely, clearly this is not possible as patients rely on these drugs as the standard of care. Therefore, the most responsible approach is to contain the hazard and reduce exposure to as low as reasonably achievable.

The strategy for minimizing staff exposure to HDs is based on NIOSH, ASHP, and USP <800> recommendations on engineering controls, PPE, and CSTD use. When evaluating the available CSTDs, our primary requirement was to identify a device that met the governmental agency definition of a closed system.1 Furthermore, UNMH sought to implement a CSTD that met the following additional criteria:

The CSTD we used previously addressed most of these criteria, but fell short on ease of use and workflow disruption. Thus, when switching CSTDs, UNMH used a four-step request for purchase (RFP) process to evaluate the available devices.

To ensure a fair and equitable RFP process, we relied on a multidisciplinary approach, requiring participation from both pharmacy and nursing, in evaluating CSTDs. Multiple areas of the health system, including UNMH pharmacies, a second hospital in the health system, and the UNM Cancer Center, trialed the devices. An internet survey platform was used to gather input from users. The CSTD evaluation process encompassed:

The Equashield clinical team was available and attentive to our needs during the 2-week trial period, providing extensive support and training. After completing step 3, the evaluation team signed a multiyear contract with Equashield without proceeding to step 4, as it was clear that the device fit both our criteria and our budget. Users felt that its components simplified the process during compounding, administration, and disposal.

Nursing and pharmacy staff is satisfied with the CSTD, which they find intuitive and efficient. Pharmacy personnel embrace the ease of use of the device’s sterilized, air-filled syringe barrel, and nursing finds the slide-to-lock connections intuitive and easy to use. Most importantly, pharmacy and nursing staff have peace of mind that HDs are being prepared and administered safely.