USP Chapter <800> includes specific requirements for both shoe covers and gowns used during hazardous drug (HD) compounding; however, the chapter does not specify the types of shoe covers to be used or detail the materials from which gowns must be made. The chapter states that when compounding HDs, a second pair of shoe covers must be donned before entering the containment secondary engineering control (C-SEC) and doffed when exiting the C-SEC,1 yet includes no further detail about the type of material or design of the shoe covers. It is likely that the expert committee assumed that the use of a second pair of regular shoe covers would result in adequate protection of the inside shoe cover. In other words, as long as the outside shoe cover, assumed to be contaminated, is removed inside the doffing area of the C-SEC, the remaining inside shoe cover, assumed to not be contaminated, could be used to enter the anteroom without spreading contamination.

Similarly, Chapter <800> also requires gowns worn during HD compounding to possess certain characteristics, stating “They must be disposable and shown to resist permeability by HDs . . . Gowns must close in the back (ie, no open front), be long sleeved, and have closed cuffs that are elastic or knit. Gowns must not have seams or closures that could allow HDs to pass through.”1 The chapter stops short of requiring coated gowns, opting instead to clarify that “gowns made of polyethylene-coated polypropylene or other laminate materials offer better protection than those made of uncoated materials.”1

To address this lack of detail, we conducted a preliminary study to determine which types of outer shoe covers and gowns demonstrate the best efficacy during testing that simulates an HD compounding environment. Based on this small preliminary study, the use of a plastic-coated shoe cover that is devoid of seams, and coated, back-closing chemo gowns should be used preferentially. The data from the shoe cover testing is reported in this article; part II will report the gown testing data in a future issue of PP&P.

To test an individual’s ability to compliantly doff personal protective equipment (PPE) following an HD compounding session, a simulated scenario was created by lightly spraying the floor of the C-SEC with Glo Germ Mist, which was then allowed to dry so that it becomes invisible. The mist is used to mimic HD residues on the floor as well as on the arms and chest of gowns. Any surfaces contaminated with the mist fluoresce and become visible under a black light. The intent is to simulate the residue that compounders pick up on shoe covers from floors, as well as residue that may be deposited on the sleeves and chests of gowns during compounding.

During a doffing lab at the CriticalPoint training facility, we were surprised to find that the double-regular shoe covers used in sterile compounding did not protect the inner shoe cover from simulated HD residue. Even when the outer shoe cover was doffed correctly and the individual tester stepped into the area not sprayed with Glo Germ Mist, the inner shoe cover consistently demonstrated contamination with the mist (see IMAGES 1 and 2).

The same was true for gowns. When the chest of the non-coated gowns typically used in hospital pharmacy for HD compounding were misted with Glo Germ Mist, the nonhazardous gowns worn underneath (as testing was conducted in ISO-classified conditions) were also consistently contaminated with the mist.

These observations prompted the decision to systematically test the use of waterproof shoe covers versus regular shoe covers, as well as coated versus non-coated gowns, in a simulated HD compounding environment. Following are the shoe cover findings; as noted previously, findings related to gowns will be published in a future issue of PP&P. 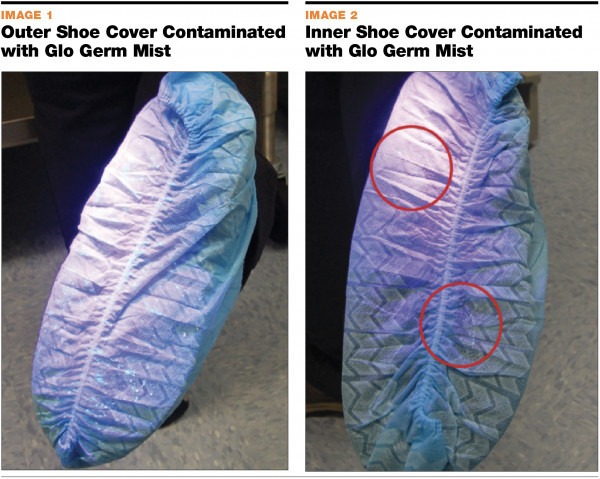 1. Glo Germ Mist was sprayed lightly on the floor of the clean side of the anteroom, past the line of demarcation. Light specks of the mist were visible under the black light and adequately simulated HD residue on a wide sheet vinyl floor.

2. Tester 1 donned a face mask and head cover. On the garbing bench, Tester 1 always donned a regular shoe cover as the first inner shoe cover (and labeled the inner cover with #1 and the words “2 regular” with a marker). The second shoe cover (the shoe cover being tested) was donned over the first shoe cover. Tester 1 placed their first double-garbed foot across the line of demarcation. The same procedure was followed for the second foot.

3. With both garbed feet across the line of demarcation, Tester 1 walked around the clean side of the anteroom (the side sprayed with the Glo Germ Mist) for roughly 10 seconds.

4. Tester 1 sat on the garbing bench and shined the black light on their first foot.

5. Tester 2 used the camera to record the appearance of the outer shoe cover.

6. Tester 1 carefully doffed the outer shoe cover and Tester 2 again used the camera to record an image. The examination of the inner shoe cover with the black light was performed carefully and slowly since the handheld black light could not illuminate the entire surface of the shoe cover at one time. The observations were recorded manually. These shoe covers were discarded.

7. Testers 1 and 2 completed the same procedure for the second foot.

8. This procedure was repeated 19 additional times so that each inner and outer shoe cover combination was tested a total of 20 times.

This procedure was followed using different combinations of shoe covers with interesting results, which are summarized in TABLE 1.

Based on this testing, we believe that the typical shoe covers used in pharmacy sterile compounding environments may not result in the containment of HD residue. It appears that both the material the shoe covers are made from, as well as how they are designed, may play critical roles in the ability of the outer shoe covers to contain HD residue.

To evaluate if the issue stemmed from the type of material, we switched to a second heavy-duty shoe cover made from poly latex, described as being impervious to liquids. Although the findings demonstrated measurable improvement, contamination was found along the bottom of two of the inner shoe covers, corresponding with the shoe cover’s machine-stitched seam.

Based on these limited data, it appears likely that using double shoe covers made from traditional materials may not result in containment of HD residues, even when doffing occurs correctly. It may be prudent to select outer shoe covers that are both seamless and made of non-porous materials such as polyethylene or other low-linting, water-resistant materials. It is important to note that although the final shoe covers used in the study met both of these criteria, the upper portion of the shoe cover material does not appear to be low-linting and therefore is not suitable for cleanroom use.

Kate Douglass, MS, RN, CRNI, is the vice president of CriticalPoint, LLC, and serves as the co-director of the annual USP <797> and <800> Compliance Studies.

Amanda Richter, CPhT, a licensed pharmacy technician, has worked in sterile compounding since 2009. Amanda is the facility manager of the CriticalPoint Center for Training and Research (CCTR) in Totowa, NJ, where she manages the controlled compounding areas, conducts all environmental and personnel sampling, and oversees lab experiences.

Melanie Dorey, CPhT, a licensed pharmacy technician in Canada, works at the Children’s Hospital of Eastern Ontario and teaches pharmacy technicians at the Accredited College in Ottawa. With the majority of her experience in sterile compounding, Melanie currently serves as one of CriticalPoint’s subject matter experts.

Izzat Rizvi is a PharmD candidate at the Ernest Mario School of Pharmacy at Rutgers, The State University of New Jersey. Izzy assisted with the hazardous drug garbing study during her Advanced Pharmacy Practice Experience rotation at CCTR. She expects to graduate in May of 2017.