Huntsville Hospital, the second largest hospital in Alabama, is a 941-bed facility that serves as the regional referral center for northern Alabama and southern Tennessee. In recent years, the hospital has expanded service throughout the region with the development of Huntsville Hospital Health System, now the third-largest publicly owned hospital system in the nation, with more than 1800 beds and 12,000 employees.

Our pharmacy operates two inpatient sterile compounding areas, as well as an outpatient oncology pharmacy. As a St. Jude affiliate location, we are also responsible for preparing chemotherapy for pediatric patients. Through a decentralized medication distribution model, four central pharmacy carousels are used for medication storage, with automated dispensing cabinets (ADCs) located on the nursing floors throughout the hospital. We are also planning a new EHR go-live in November 2018.

Currently, we operate two IV compounding robots. Our hospital made the decision to assume control over sterile compounding by bringing the process in-house through robotic automation for IV dose preparation. The primary motivations for this change are to establish control over the quality and quantity of products produced, improve operational efficiency, create cost savings, and most importantly, ensure confidence in the safety of the products we provide to patients. 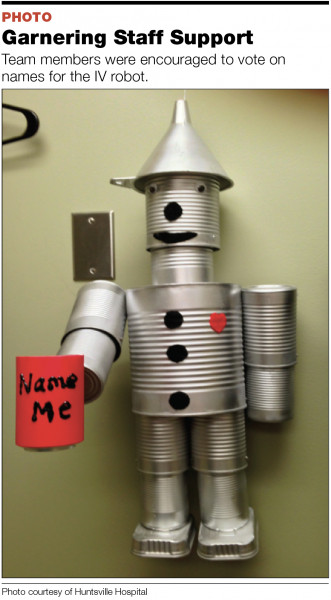 Our reasons for adopting robotic IV compounding focus on ensuring medication safety. In addition, we sought to identify a solution that supports standardized processes and reliability while delivering a sound return on investment (ROI).

Our initial goal was to utilize the robot to support batch production of our highest volume preparations. The first step was to evaluate the medications we were outsourcing at a high volume, and then take into account the savings opportunity from bringing production in-house. In addition, we evaluated which preparations were straightforward and would run efficiently on the robot.

Another key factor influencing the decision to use robotics to bring IV compounding in-house was the need to support extended beyond-use dating (BUD) for our sterile preparations. Robotic production ensures precise measurement, as each individual ingredient is weighed, measured, and contained inside a Class 5 environment. These safety factors instill confidence in applying a 90-day BUD compared to a product compounded by a human, where variability exists and errors may not be detected via batch sterility testing.

Securing financial savings through insourced versus outsourced compounding proved essential in gaining administrative approval to purchase the robots. The technology not only met our safety and efficiency needs, but the compact size of the robot we chose offered significant flexibility in cleanroom configuration. Executive approval for purchasing one robot and adding two technician FTEs was justified based on the ROI we would secure from insourcing. Fortunately, construction funds were not required, as we had considered future growth for robotics during our cleanroom remodel 2 years previously.

The first robot was installed in 2013. While we ultimately planned to install two, we began with a single robot to allow time to assess our needs and adjust processes accordingly. Because we built our new cleanroom 2 years earlier with the intention of implementing IV robotics at a later date, our implementation process rolled out smoothly from a physical plant perspective. The plant operations and IT departments were instrumental in moving the equipment into place and setting up the necessary network drops and other electrical needs.

In 2016, the second robot was installed. To gain staff buy-in for this new technology, we asked staff to vote on names for the robots. Thus, Rita and Margo became the first two robotic staff members in the pharmacy department (see PHOTO).

Our original intent was to have one robot perform batch production with the second supporting patient-specific, just-in-time doses, but after experiencing success with single-robot batch production, we decided to utilize both robots for this purpose. Moreover, configuring both robots for the same purpose provided redundancy that protected us from outages due to maintenance or other issues. The first robot began compounding calcium gluconate and succinylcholine, which are both utilized at a high volume in Huntsville Hospital. By alternating production runs of these drugs week to week, we were able to meet our clinical needs without overproducing while also realizing a positive ROI. Ultimately, it was the success of this strategy that helped us decide to focus on batch production as the robots’ prime functionality (see FIGURE 1).

For 6 months post-implementation, we dedicated two technicians exclusively to robot operations. This decision proved valuable, as it allowed them to become experts in utilizing the technology. As performance stabilized, additional technicians were trained to operate the robot to ensure adequate coverage. Today, five to six technicians have been trained on the robot and are managed by our robot technician coordinator.

A two-part training process is used to prepare technicians to properly operate the robots; phase one is onsite robot operations training conducted by the robot vendor’s engineer. Each technician must be certified by the engineer before receiving a login to operate the robot and then proceed to the second phase of training, wherein the in-house robot technician coordinator outlines the P&Ps, as well as the workflow processes and specific details for each product preparation. Technicians learn the batch process for bags, syringes, and narcotics; cleaning procedures; batch sequestration and release; and how to order supplies and drugs for the preparations.

Each new drug produced requires a new compounding procedure specific to that product. Standardizing the product, diluent, final label/bar code, and supplies needed for preparation, as well and the number of products to be prepared per batch, is crucial to reduce waste and avoid errors.

The two robots compound 24 hours per day, 4 days per week. One technician operates the two robots simultaneously, and we work three shifts per day with a small overlap on one shift to allow for transporting completed drugs to sequestration and for collecting more drugs and supplies for preparation. Production occurs Mondays to Thursdays only so that time is allotted for overnighting our samples for sterility testing, which are delivered every Friday.

To manage doses and minimize waste, we closely track the drugs that are produced against monthly usage reports as well as individual medication quantities per event or batch. Alternating medications and staggering batches, versus making the complete quantity needed for a month in one run, helps avoid having a bulk quantity of medications on hand with the same expiration date and also provides flexibility to adapt to variable consumption for some medications. We maintain consistency by running the same medication for multiple shifts in a row. When conducting sterility testing, this total run is considered one batch. Per USP Chapter <71> requirements, samples are pulled from every shift to reach the requisite number of samples for sterility testing to support extended BUD. To date, no medication produced by the robots has ever failed a sterility test. The efficiency of the process has led to a reduction in the overall costs of sterility testing.

With two robots supporting production, it is important to consider which medications are run on each robot concurrently in an effort to avoid overloading the technician and to reduce confusion. For example, if two quickly produced medications are running simultaneously, the technician may not be able to set up the next preparation fast enough, resulting in downtime. Similarly, we try to avoid running two different syringe preparations at the same time to avoid potential mix-ups as the technician removes medications from the robot and affixes the secondary labels.

The proven success of our batch production has allowed us to bring additional medications in-house for compounding. We continually evaluate opportunities to add new medications, choosing those with the highest ROI (see FIGURE 2). It is important to ensure that insourced medications have a reasonable extended stability potential and that they will run smoothly on the robot. If the results of our vetting process indicate that a medication is a good candidate, we then perform stability testing for that product. 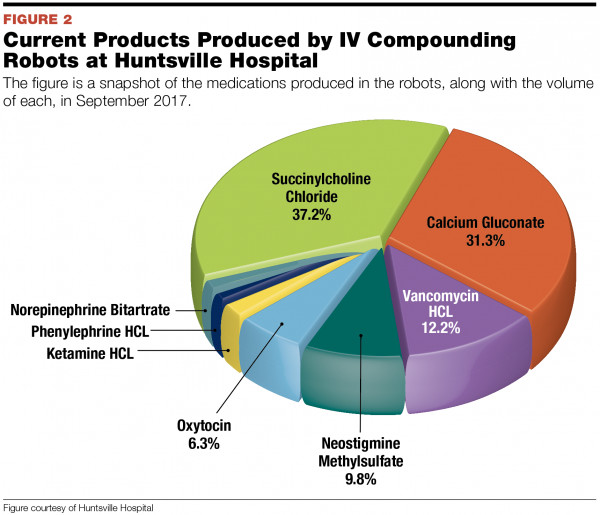 The medication safety and workflow benefits of insourcing more than support our investment in the robots. Moreover, all of the medications produced by our devices receive an extended BUD. While the compounding process requires initial stability, sterility, and potency testing, as well as continual testing of sterility for every batch, it has proven cost effective by allowing us to produce items that may be stored at room temperature in an ADC with extended use dates. OR syringes and oxytocin are important examples of drugs that benefit from an extended BUD.

Our immediate future goal is to include additional medications in our in-house compounding strategy to maximize robotic production. Long-term, we plan to operate both robots 24/7. We are currently working to optimize the workflow for our ancillary steps, including storage, labeling, sequestering processes, and inventory management. Ensuring that these essential processes run smoothly will allow us to operate the robots more efficiently, thus averting downtime between batches.

Exerting increased control over the cost and quality of these often expensive, high-risk medications is essential to providing optimal care to our patients. IV robotics have transformed our sterile compounding processes, and we look forward to expanding our production line with additional robots in the future.

When bringing sterile compounding in-house, it is critical to consider the cost of the technology, service fees, labor, labels, supplies, and stability and sterility testing. We have identified a few tactics that further improve savings.