In 2008 the Virginia Board of Pharmacy published a guidance document indicating that after October 31, 2008, it would begin enforcing the USP physical standards provisions. Under this new mandate, non-compliance could result in a monetary penalty of up to $5,000 per violation for each sterile preparation compounded under conditions that did not conform to standards. In order to meet these new expectations, Centra Lynchburg General Hospital, a 327-bed hospital in Lynchburg, Virginia, that is part of a not-for-profit health care system, made the decision to move forward rapidly with a new cleanroom, which would be part of a more comprehensive pharmacy expansion project that also included an IV support area, new order entry stations, and a distribution area.

A Novel Approach
Because we were building a cleanroom from the ground up, there were few limits on our design options. In order to meet our primary goals of improving workflow and providing our compounding personnel with less constricted space in which to operate, we chose the relatively novel approach of using integrated vertical laminar airflow to serve as our cleanroom engineering control. We created a designated area within the cleanroom wherein vertical laminar airflow provided ISO 5 zone air, eliminating the need for other engineering controls such as compounding aseptic isolators (CAIs) and LAFWs. Simply speaking, this is accomplished by installing HEPA filter modules in the ceiling of the cleanroom and creating a wall of unidirectional airflow; a Lexan shield defines the unidirectional space, and stainless steel worktables are positioned below these modules. The wall nearest the workbench and the wall across from the workbench are lined with wall returns, placed near the floor, to direct the airflow.

One of the greatest advantages of this type of system is that it affords more linear feet of contiguous ISO 5 zone air, providing more space and freedom of movement for the compounding staff to work, and allowing for optimal workflow and productivity. Given the number of advantages this system offers, we decided to move forward with the vertical integrated laminar airflow engineering control. Since we were building an entirely new cleanroom, integrating the plans for vertical airflow into the overall design was a straightforward process. 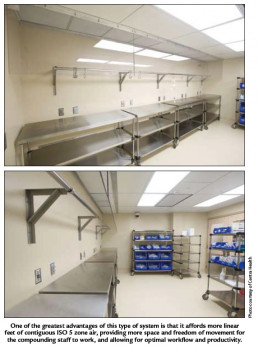 Click here for a larger version of the Figure.

Managing Design and Installation
A common challenge when adopting new technologies is the lack of resources available to provide a roadmap for the implementation. This held true for our integrated vertical laminar airflow project as information resources were few and we often faced conflicting opinions on how to design and install the system. Ultimately, due to the complexity of the project, we decided to hire an independent consulting team with experience installing this type of system. The consultants helped guide our architect and engineering (A&E) team, who then developed construction documents for the local contractor.

While hiring consultants helped simplify the process of designing a cleanroom with integrated vertical laminar airflow, we did face other design challenges. Incorporating all the technical requirements necessary to comply with while designing a space that would maximize productivity proved difficult. In addition, there were many details that had to be considered when creating the integrated vertical laminar airflow workspace. For example, we had to incorporate special mounting tracks to facilitate removal of the HEPA filters from the laminar flow area for maintenance. Once construction was complete, the flow hood had to be smoke tested. A cardboard mock-up was used during smoke testing to determine the optimum location for permanently mounting the Lexan shield. As well, the pharmacy stakeholders worked closely with facility engineers on the design of the mechanical systems. The project required a separate air handler to be installed on the outside of the building to serve the cleanroom suite, as there were engineering considerations related to humidity control and freeze protection that had to be taken into account.

The cleanroom design and construction took one year to complete. To manage our compounding during the interim, we outsourced our chemotherapy and cardioplegia compounding and purchased more ready-to-use IV products. We also purchased a CAI for compounding the remaining products—on average we compounded 200 CSPs per day, including TPNs, in the CAI. While it was challenging for our staff to compound this volume in the CAI, it did provide an opportunity for our technicians to gain experience working in vertical airflow, as they previously only had experience with horizontal airflow.

Training Considerations
Training staff on using this new technology was relatively easy as they were already familiar with working in vertical airflow. The greater training challenge involved additional processes that we had to build into our compounding workflow to comply with , such as proper material transfer, garbing, hand-washing techniques, and cleaning. To help gain staff buy-in with the new protocols and processes, we employed the technicians who most readily acquired the new skills to provide leadership to the group.

By spending time defining our vision, training and testing staff, and gaining buy-in prior to implementation, the transition to using the cleanroom and its new engineering controls was relatively smooth.

Cleaning Concerns
Cleaning the stainless steel tables in the direct compounding area is easier than cleaning the LAFWs we used previously. However, cleaning and disinfecting our new cleanroom (which includes an ante-room, non-hazardous drug compounding room, and a hazardous drug compounding room) according to standards takes considerably more time than we were spending in our IV lab. Given all the new cleaning responsibilities, we considered having our facility’s environmental services department manage these tasks. In the end the pharmacy decided to retain responsibility for cleaning the cleanroom. We felt our technicians’ understanding of the reasons behind proper cleaning procedures would result in greater attention to detail and thus ensure a more compliant environment. Ultimately, education is the key. Chapter clearly defines what is required during cleaning, so we developed policies and procedures to be in compliance with requirements and educated the staff on the requirements. In addition, our staff designed workflows to incorporate cleaning into their daily routine.

Conclusion
While an integrated vertical laminar airflow system may not suit all pharmacies, it has proven beneficial for us. Part of our success with such a sophisticated project was based on using outside expertise and careful planning. With our new cleanroom up and running we have been able to reduce the amount of compounding we outsource and shortly we will begin providing centralized compounding services to another hospital in our health system, extending the benefits of our investment in a -compliant cleanroom.

Nadine M. Gilmore, RPh, has more than three decades of experience in hospital practice. Currently, she is the pharmacy operations manager for Centra Lynchburg General Hospital, where she has been employed for 30 years. She participated in the design and implementation of Centra’s new cleanroom and has served on the implementation team for the installation of two computer systems. She received a BS in pharmacy from the Medical College of Virginia, and is a member of ASHP, CPFI, as well as a number of state organizations.

While installing an integrated vertical laminar airflow system adds a level of sophistication to a cleanroom construction project, there are many design elements to consider that are unique to this project:

Effect of COVID-19 on Pharmacy Technology

Deployment of Remote Work for the Pharmacy Workforce