Signs of a Turnaround are Mounting in 2010

While the healthcare industry as a whole continues to face uncertainty with its attendant economic concerns, the most refreshing discovery from this year’s State of Pharmacy Automation survey is that concerns over automation and medication safety system stagnation have significantly diminished in 2010. Both in terms of spending projections and implementing new systems, pharmacy automation appears to have climbed out of the doldrums of 2009. The value of automated systems to enhanced patient safety cannot be ignored.

Survey Design
In the second quarter of 2010, Pharmacy Purchasing & Products polled a random, nationwide sampling of health system pharmacy directors. We asked about staffing, budgets, current automation use, and plans for future adoptions. Responses were solicited via email and we received a total of 405, yielding a confidence interval of 4.69 (95% +/- 4.69) based on the total population of pharmacy directors nationwide.

We intentionally surveyed a random sampling of pharmacy directors, not simply readers of PP&P, ensuring the data reflects trends across the entirety of hospital pharmacy practice. Given this, we are quite pleased to learn that 77% of pharmacy directors use PP&P as a tool to research automation purchases.

Some Budget Relief
The belt tightening of 2009 has begun to abate. Facilities suffering budget reductions dropped this year and while automation spending saw only small growth in 2010, those same growth projections for 2011 and beyond are much stronger, giving reason for optimism.

Survey Trends
Despite the budget challenges faced by some institutions, the commitment to automation was strong this year: employment of facility-wide wireless networks increased, the number of FTEs dedicated to automation also grew, and a majority of facilities nationwide now employ a dedicated pharmacy informaticist.

Some medication safety systems, such as smart pumps, continued to enjoy a strong commitment from administration despite the budget tightening of 2009. The majority of automation solutions, however, did not enjoy this commitment and the slow down in implementation numbers last year reflected this. The good news is that in 2010, medication safety technology adoptions are back on track. For example, usage of physician order imaging systems skyrocketed this year, and simultaneously, CPOE adoptions grew and are predicted to soar over the next few years. BCMA implementations also expanded significantly—particularly among smaller institutions, and the adoption of automated dispensing cabinets is now nearly universal for facilities of all types and sizes.

The commitment to packaging automation was significant this year as many facilities move toward a point-of-care medication distribution model, relying on automated dispensing cabinets that are restocked from the central pharmacy. The number of facilities packaging in bar coded unit dose grew rapidly, following a decline in 2009, and two-dimensional bar codes are increasingly common. While automated approaches to syringe bar coding increased, interest in new robotic IV syringe preparation devices is confined to a small number of the largest facilities. This commitment to streamlining bar code unit dose packaging is predicted to continue and more facilities plan to explore outsourcing opportunities for their repackaging.
Furthermore, temperature-monitoring systems benefited from the increasing number of facilities with wireless networks in place and adoptions of these systems are projected to continue their rapid growth.

Continuing Challenges
Using safety technology to its fullest capacity is one of the biggest challenges facing pharmacy today. Smart pump devices, for example, receive strong marks in user satisfaction, but their accompanying data collection methods do not. Many pharmacy directors plan to concentrate on improving the often challenging data collection methods over the next few years to allow for improvements in library uploads, CQI data collection, and development of patient-specific orders. All of these improvements are dependent on an increase in the number of facilities adopting wireless data transfer for their smart pumps. 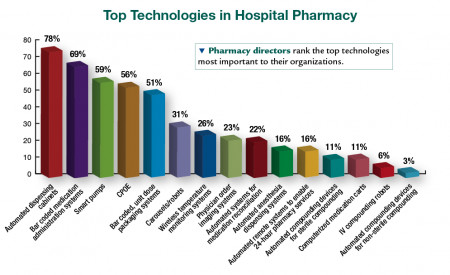 While CPOE implementations picked up this year and are expected to soar in the next few years, many new adopters struggle to increase the percentage of medication orders sent via their CPOE system. Pharmacy directors’ satisfaction with their CPOE system correlates strongly with their system experience. Those facilities sending most of their orders via CPOE give their systems much higher ratings than those that are new to this technology.

Another continually thorny area for pharmacy is medication reconciliation. The adoption rate of automated solutions—while increasing—still remains low, as do satisfaction ratings for most paper-based systems.

Lastly, 2010 saw little progress in the number of facilities using the important safety measure of bar code verification during the refilling process for automated dispensing cabinets.

Pharmacists as Decision-Makers
Pharmacy continues to solidify its role as the primary decision maker within the health system for all medication safety solutions. 2010 saw pharmacy’s influence grow even stronger as the primary purchaser of automated dispensing cabinets, BCMA systems, and smart pumps. In addition most implementations of these safety systems are also managed by pharmacy.

Conclusion
Over the next few years, pharmacy will be quite busy managing the medication safety system adoptions that are projected to be widespread. At the same time, budgets are expected to grow at a somewhat slower pace than the one experienced prior to 2009. As pressure mounts on pharmacy directors to improve budget planning for automation adoptions, continue to look to PP&P to provide you with guidance for getting the most out of your automation dollars.

Select graphs from the State of Pharmacy Automation are available for your use as PowerPoint slides. Click here to download