Milford Regional Medical Center (MRMC) is a 140-bed, nonprofit community and regional teaching hospital in Milford, Massachusetts, offering a full range of clinical services from adolescent health to women’s services. Milford Regional’s patient care center includes eight operating suites, consolidated surgical services, and a medical/surgical floor with private rooms. In addition, the maternity center has been expanded and updated, and a new cancer center has recently opened. The pharmacy operation at MRMC is staffed with 6.6 pharmacist FTEs, one FTE in informatics, 5.8 technician FTEs, and one FTE in purchasing. MRMC recently implemented a central pharmacy automation system with carousel distribution with the underlying goal of creating a more efficient medication distribution system out of the central pharmacy. We chose to implement carousel storage as opposed to other options, such as a robot, mainly because the carousel offered the best storage capacity given its footprint, allowing us to maximize the limited space we had available in the pharmacy.

Choosing Automation in the Pharmacy
The decision to implement carousel technology was driven by a lack of space and the need to improve the layout of the pharmacy. Prior to the carousel, our pharmacists’ workstations were located in the middle of the area where all our dispensing functions took place, making it a loud and chaotic atmosphere in which to provide clinical services. After reviewing several ways to reconfigure the department, we discovered that the greatest opportunity for space savings would likely come from acquiring carousel storage. While investigating the available technology, it became clear that a carousel could provide us not only with the space we needed, but would give us a solution to inventory control challenges as well as automate our ordering, receiving, stocking, and picking functions. 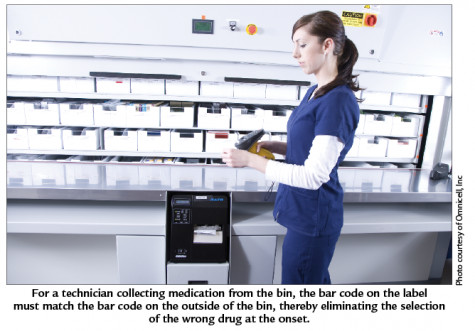 Planning and Preparation
Once the decision was made to purchase the carousel, the total implementation process took approximately three months. We sent two staff members to the vendor’s headquarters for four days of training to be designated as system administrators. During the selection process, we worked with our facilities and engineering departments to determine a suitable location for the carousel based on the available ceiling and floor space as well as the weight load of the filled unit.

To build the carousel’s database we gathered data about every medication on the hospital formulary, including each medication’s generic name, trade name, strength, dose form, NDC number, inventory PAR, and reorder levels. Every medication was placed into a carousel test bin to determine how much space that medication would require in the actual carousel. Also, a shelf of tall or outsized items, such as bottles of liquids or items that had to remain upright, had to be configured for these items to fit properly.

The database was loaded onto the carousel software provided by our vendor. In order to save time during both dispensing and stocking, the top 300 fast-moving medications were placed on adjacent shelves with the remainder of the carousel inventory on shelves in alphabetical order by generic name. Larger medications (eg, cases of premixed IV bags) were identified and assigned to locations on shelves outside the carousel. Refrigerated medications were assigned to a remote location, as our particular carousel does not have a refrigerated section. In order to smooth the initial stocking process, several weeks prior to the go-live date, we labeled the carousel’s medication bins with the corresponding generic name, trade name, strength, dose form, shelf/bin location, and bar code for each medication we planned to stock in the unit. Starting the night prior to the go-live date we placed the empty bins on their corresponding shelves in the carousel.

To ensure full integration, our vendor’s project manager worked with our pharmacy buyer to set up a network connection between the carousel and our drug wholesaler. This interface allows a purchase order to be automatically generated from the carousel, which saves a great deal of time. The project manager also worked with the drug wholesaler to establish a purchase order and invoice file format that works with our carousel’s software.

Streamlined Workflow and Improved Patient Safety
As with most pharmacy technology upgrades, the main driver for implementing an automation system was to improve patient safety. When an order is entered into the system, it picks those drugs from the shelves and places them into separate bins to be collected by the technicians. During that process, a bar-coded label is affixed to each drug. For a technician collecting medication from the bin, the bar code on the medication label must match the bar code on the outside of the bin, thereby eliminating the selection of the wrong drug at the onset.

To streamline workflow, the system also includes a replenishment interface that connects the carousel to automated dispensing cabinets (ADCs) in the nursing stations, which send ordering information directly to the carousel software to generate a pick, as well as the attendant bar-coded labels. By combining all the ordering information, the system allows the technician to pick all necessary refill items at one time to replenish the assigned nursing unit ADCs. Now, instead of several technicians going to the shelves to pick medications for stocking the ADCs on the floors, one technician can pull all the medications needed from the carousel freeing the other technicians to perform additional tasks. This has saved time and increased patient safety by eliminating the possibility of the wrong medication being picked and possibly placed on the nursing unit. The carousel will not move forward unless the bar code on the drug and the one on the label match.

Our system software provides the pharmacy with a great deal of detailed information regarding purchases and dispensing statistics, and also tracks expiration dates and lot numbers. This information can be used to improve efficiency in inventory management and reduce costs. The reports we produce through the software serve as a complete audit trail for TJC compliance, as we can track inventory adjustments and document discrepancies, and verify inventory counts.

Implementation Process
The actual implementation of the carousel presented several challenges due in part to our physical space restraints. Our carousel is 13 feet long by 10 feet high by 8 feet deep, which required that it be assembled in the pharmacy while the pharmacy was still operating. A team of six technicians from our vendor was on site for four full days in order to assemble the overall structure and install the shelving units, motors, and electrical components. In addition, a minor delay was caused when we made a last minute decision to move medications from the old shelving units into the carousel on the day prior to the go-live date. We were able to load about 90% of the medications into the carousel on the day before go-live. The remaining 10% of the inventory was loaded throughout the day.

Implementing an automated system such as a carousel or robot requires a significant amount of preparation. We held a lot of discussions ahead of time to ensure we had the necessary resources in place and we analyzed several reports regarding our usage of all medications, as well as our purchasing history. There is a lot of required implementation work but with advance planning, it can be a smooth process. In general, it would be wise to plan for an eight- to 12- week implementation.

Prior to implementation, a present day and future workflow process should be developed and reviewed with the technicians. Automating the picking process can eliminate redundancies and allows technicians to redirect their efforts toward patient care tasks. This transition is challenging, but after working closely with the technicians to refine the daily processes, the workflow is more efficient and finally provides our technicians with adequate time to complete other tasks. Ultimately, an automated carousel storage system has created a more orderly work environment for the entire pharmacy, and the resultant workflows have contributed to improved patient care.

Susan J. Otocki, RPh, is director of pharmacy at Milford Regional Medical Center in Milford, Massachusetts. Susan has been in this position for over 12 years, having previously worked in the home infusion business. Also serving as a preceptor at Massachusetts College of Pharmacy and Health Sciences, she was awarded Preceptor of the Year for the college in 2007. Susan received her BS in pharmacy from the University of Rhode Island, and has been a pharmacist for 29 years.