The unique environment of the operating room (OR) with its unpredictable workflow necessitates quick thinking and reaction from health-system staff. Minimizing the risk of medication errors in this environment requires proven effective measures, especially given the potential for medication errors and patient harm occurring in the OR. Reports show there is one medication error in every 133 anesthetics given.1 Additional studies have shown that drug syringe and preparation errors in the OR have accounted for 452 (50.4%) errors out of 896 incidents. Of these, 169 (18.9%) involved syringe swaps and 187 (20.8%) involved the selection of an incorrect ampoule or a drug labeling error.2 Given this data, it is important to recognize that most outsourcing vendors and their pre-filled syringes do comply with TJC National Patient Safety Goals. Additionally, pre-filled syringes have demonstrated increased compliance with American Society of Health-System Pharmacists’ (ASHP) recommendations on preventing IV medication errors, consensus recommendations from the Anesthesia Patient Safety Foundation (ASPF), and USP Chapter <797> requirements for compounded sterile products. Thus, implementing outsourced pre-filled syringes is a strategy that has the potential to enhance medication safety, regulatory compliance, and clinician satisfaction.

Syringe Conversion Assessment
At the Medical University of South Carolina (MUSC), a 700-bed academic medical center in Charleston, South Carolina, we chose to implement an outsourced pre-filled syringe program driven by the desire to improve medication safety, decrease drug waste, improve regulatory compliance, and employ enhanced labeling. It was pivotal for the pharmacy and anesthesia departments to collaboratively determine a multi-step, systematic approach to achieve a successful conversion to pre-filled syringes in the OR.

When reviewing the available outsourcers, our vendor selection criteria included real-time stability data, a quality assurance process, proper environmental testing, process validation, and sterility testing. Additional factors included the vendor’s use of error reduction initiatives such as bar coding, standardization, color-coding, tamper-evident seals, and tall man lettering. Once we narrowed the list of potential vendors based on the above criteria, a team consisting of anesthesiologists, CRNAs, anesthesia technicians, pharmacists, and pharmacy technicians performed a more in-depth assessment, including a site visit to the vendor’s facility to observe their operations and discern, first-hand, the vendor’s product integrity and the quality of their overall compounding processes. As with any outsourced venture, performing a site visit and observing the vendor’s operation is vital. As the ultimate authority over these products in our institutions, pharmacy directors and managers need to perform extensive due diligence in selecting a qualified outsourcer.

Anticipating Workflow Changes
Due to the changes in workflow that would result from the conversion, it was critical to provide education on the new products for both the OR and pharmacy staffs. Prior to go-live, our pharmacists had to become familiar with the pre-filled syringe sizes, concentrations, and packaging available through our vendor. Most important, the pharmacy staff selected the products that would best serve the anesthesia department. This was key due to pharmacy’s pre-existing knowledge of products that were likely to produce high amounts of waste or that had a higher potential for error. The medications we were using at the time that fell under either of these criterion were the first to be considered for conversion (see Table 1). In preparation for the conversion, OR pharmacy staff had to develop new processes for storing, stocking, and re-stocking the pre-filled syringes; rearranging anesthesia medication cassettes; and inventory control. The final element, performed concurrently with the introduction of the pre-filled syringes, was a formal survey conducted by pharmacy where all practitioners involved could assess the use, effectiveness, safety, and satisfaction with pre-filled syringes and the overall conversion process. 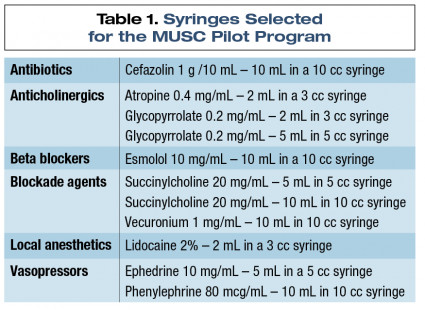 Pilot Implementation Study
In October 2009 the MUSC OR Pharmacy conducted a study evaluating our pilot conversion to pre-filled syringe use within one OR location, which was composed of nine OR suites, primarily serving gastrointestinal and cardiology cases. Our study compared the production of drug waste in the OR when using select pre-filled syringes versus the traditional use of vials or ampoules for filling syringes. In addition, the study assessed clinician satisfaction with respect to patient safety, drug waste reduction, and enhanced workflow through a survey at the conclusion of the study period. As a result of this study, we chose to implement pre-filled syringes, in full, at this OR location because we felt doing so would most effectively allow us to control and manage waste collection. 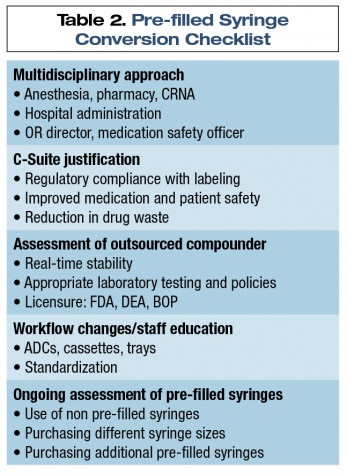 Our study consisted of two phases, 10 days each in duration. We first collected drug waste data at baseline (Phase I) and then again following the implementation of select pre-filled syringes (Phase II). Leading up to Phase II we implemented nine different outsourced pre-filled syringes: atropine, cefazolin, ephedrine, esmolol, glycopyrrolate, lidocaine, phenylephrine, succinylcholine, and vecuronium. At the conclusion of the phases, attending anesthesiologists, fellow/resident anesthesiologists, CRNAs, anesthesiology technicians, pharmacists, and pharmacy technicians were electronically surveyed regarding drug waste reduction and clinician satisfaction with the use of the pre-filled syringes. The results of that survey showed the total drug waste by volume decreased 61% from Phase I to Phase II, with the reduction in lidocaine waste as the greatest, followed by succinylcholine, and phenylephrine. Overall, the survey results showed that the majority of clinicians indicated fewer drugs were wasted when they used pre-filled syringes. In addition, all anesthesiologists and CRNAs surveyed indicated that using pre-filled syringes saved them time in preparing syringes for a procedure. Of note, the data indicated that among the many different features of the pre-filled syringes, half of the clinicians ranked the label as the most important safety feature. Among the comments submitted by respondents, many indicated they had more time to spend with patients and there was quicker OR turnover, directly resulting from pre-filled syringe use.

Conclusion
Given the position statements and guidelines authored by regulatory bodies such as TJC, ASHP, ASPF, and USP <797>, as well as the results of our study, it is clear that outsourcing pre-filled syringes is a viable option for hospitals and health systems. However, as with any systematic change, be sure to thoroughly evaluate the potential impact for all affected parties. Our experience has been that the pharmacy department can play a major role in advocating for and leading strategies to reduce medication errors, decrease drug waste, and enhance regulatory compliance within the OR, and outsourcing pre-filled syringes has helped us accomplish these goals. Our collaboration with anesthesiologists during the entirety of this conversion resulted in a successful implementation, thereby contributing to a significant increase in clinician satisfaction with the use of pre-filled syringes. Due to the success of the outsourced pre-filled syringe program in our original OR location, we are now in the process of converting our other two larger OR areas to pre-filled syringe use, as well as more specifically assessing our current pre-filled syringe usage and determining additional syringes and sizes to be purchased.

Alexander J. Kellner is a fourth year doctor of pharmacy candidate at the South Carolina College of Pharmacy at the MUSC campus. Alexander received his BA in biological sciences from Binghamton University, and has worked as a pharmacy intern in both the main operating room and nuclear pharmacy at MUSC.