Installing the Robot
The first step in the implementation process was identifying the best location in our cleanroom for the robot and determining how to install it with minimal disruption to our compounding operations. Our facilities department worked with an architect as well as engineering and construction companies on addressing these issues.

The engineering company was responsible for verifying that our ventilation system could handle another piece of equipment without disrupting the delicate air balancing requirements of the cleanroom. Once this was determined, the architect was tasked with deciding how the robot, which takes up about 11 square feet, would best fit in our 58-square-foot cleanroom, keeping in mind that just like our biological safety cabinets (BSCs), the robot requires ventilation through a HEPA filter to the outside. Because the final door that leads into the cleanroom area could not be expanded, we decided to cut out a section of the wall to allow the robot to be placed in the designated location. The wall was replaced after the installation.

Installation of the robot required coordination between the pharmacy department, the manufacturer’s implementation team, and the construction crew. The whole process was executed with minimal disruption to our regular compounding services as the installation was completed over one 9-hour period during the night shift: the cleanroom was closed at 10 pm one evening and was recertified the following morning so normal cleanroom operations could resume by 7 am. 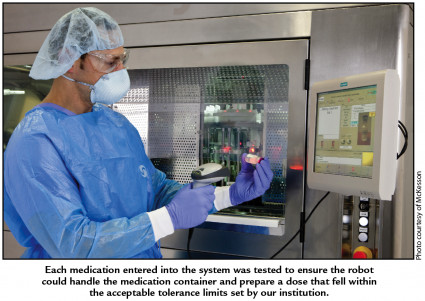 Building the Specific Gravity Database
One of the biggest challenges we faced with this technology involved building the specific gravity database for the medications and solutions that would be used by the robot. To ensure the proper amount of medication has been prepared in the syringe, the robot weighs the vial before and after drawing up the medication. It also weighs the solution before and after the medication is injected into the final container to ensure the appropriate amount of medication has been placed into the final container. The robot then compares the theoretical weight of the preparation based on the dose with the actual weight of the finished preparation. Finally, the robot returns a pass or fail message for the preparation based on parameters the institution establishes as an acceptable percentage of error; ours is set at +/- 5%. The system also incorporates bar code scanning and product image identification to ensure that the appropriate medications and solutions are used for the preparations.

It took about three months for our sterile product room supervisor to build the database, which initially started with five medications and now includes a total of 24 medications. In order to build this database properly, we called the manufacturers of the medications and solutions for the specific gravities. Several manufacturers supplied us with this information; however, others told us they did not have this information or they were not allowed to provide it. We sent some medications out to an independent laboratory for specific-gravity testing. Since installation, the manufacturer and distributor of the robot have been working with us to help ensure that specific gravities are available for the medications and solutions we will be using with the robot.

Quality Control Testing
Once the robot was installed in the cleanroom and the database was built, the next step was initiating quality control testing. First, the robot needed to be certified as an ISO Class 5 environment, so we brought in an independent company to certify that the robot met these conditions. Just like our BSCs, the robot is recertified every six months. After this certification, we moved on to sterility testing of preparations. This was done with the help of the microbiology testing company that performs the environmental testing for our cleanroom. Preparations were prepared using TSB growth media vials and bags. The preparations were incubated for 14 days and results were reviewed for microbiologic contamination. Finally, we performed cross-contamination testing to assess the potential of cross-contamination when moving from one dose to the next. This testing was done using non-cytotoxic agents to allow for easier handling of testing samples.

Final Accommodations
Once the robot passed the necessary quality control tests, the manufacturer began loading the chemotherapy medications into the database. Each medication entered into the system was tested to ensure the robot could handle the medication container and prepare a dose that fell within the acceptable tolerance limits set by our institution. While this testing was being conducted, we worked with the manufacturer on building a HL7 interface between the robot and our pharmacy system. We felt that it was important to have this interface with the pharmacy system to prevent the possibility of transcription errors, which may occur if the pharmacist has to manually type the patient preparations into the robot.

Addressing Staff Training
Once the robot was ready, we started training the technicians and pharmacists who regularly prepared chemotherapy. The first training session was conducted with four sterile-products technicians and two pharmacists. We eventually expanded training to include all six sterile-products technicians and eight pharmacists. Initially staff complained that the robot prepared the doses too slowly. However, the issue was not with the robot; the problem stemmed from not adjusting our workflow to best incorporate the robot into our daily operations. We met with staff and discussed the appropriate queuing of preparations in the robot so it could prepare the doses according to their administration times.

The biggest adjustment for pharmacists was no longer seeing all the empty or partial vials used in the preparation of the final dose. They also did not get to see how much medication was put into the bag unless they happened to be watching the robot prepare the dose through the window. Many of the pharmacists felt uncomfortable signing off on a dose that the robot “passed” without seeing the preparation details. To help resolve this issue, we worked with the manufacturer to develop a pharmacist checking screen. This allows the pharmacist to scan the bar code on the finished dose and review the following preparation details:

In addition, the theoretical weight, actual weight, and percentage of error between the two are displayed along with the robot-assigned “pass” or “fail” designation for the pharmacist to review.

Some staff members were resistant to transitioning to the robot as they did not trust the technology, and they looked for any opportunity to prepare the chemotherapy manually rather than using the robot. We met with these individuals to reinforce the importance of using this new technology and the benefits that it provides.

Managing Backorders
Recently, an increasing number of medications on backorder has presented a challenge to using the robot. Medications in the database were chosen based on regularly purchased brands and vials sizes. Manufacturer backorders have forced us to purchase alternative brands and vials sizes, which means we then have to input the specific gravities for these additional products into the system. Some brands work better in the system than others as some vials are more easily manipulated by the robotic arm; however, we have not had the luxury of choosing which products we would like to use due to these backorders.

Continued Improvements
We continue to work with the vendor to improve use of the robot. We are looking forward to new software that will allow the robot to handle vials more effectively by grabbing the body instead of the neck of the vial. We also are anticipating the installation of a new shaker table so larger vial sizes that require reconstitution can be handled by the robot. The vendor is also collaborating with us on the development of final labels produced by the robot that will work with our bar code medication administration system. As of now, we are still manually placing labels generated by our pharmacy system on the final product.

There are some current limitations with this technology as well, including the inability to prepare chemotherapy doses where more than one medication needs to be placed into a final container; medications that require filtering during reconstitution or preparation cannot be used; and there are particular vial sizes that are not compatible with the robot. We are anticipating the vendor will be able to address these issues in the future.

Conclusion
While we have faced some challenges implementing the robot, we have been able to successfully address and resolve these issues, and we will continue to work with the vendor to improve the functionality of this device. Overall, this technology has provided us with a valuable tool in the production of chemotherapy, allowing us to improve both the safety and efficiency of chemotherapy preparation. We are currently preparing around 50% of all chemotherapy doses with the robot and hope to soon reach our goal of 80%.

Michael C. Cotugno, RPh, has worked at Brigham and Women’s Hospital in Boston, Massachusetts, for 18 years as a clinical pharmacist, pharmacy supervisor, and assistant director before assuming his current role as the director of pharmacy patient care services. He served on the hospital’s decision and implementation teams that have directed the execution of computerized physician order entry, automated dispensing cabinets, bar code scanning technology, an electronic medication administration record system, and medication reconciliation. Michael received his BS in pharmacy from Northeastern University in 1991. Michael’s current practice interests include automation of the medication-use-system, medication safety initiatives, and emergency preparedness.