Register for our 10/22 Webinar: Training Pharmacy Technicians for USP <800> Compliance

Profiling ADCs in the Emergency Department

Despite the emergency department being a high-medication-use area and the Institute of Medicine citing it as a key hospital location for adverse medication events,1 it has traditionally had less pharmacy oversight and fewer safety controls than other hospital areas. Resource barriers to operationalizing many safety steps have contributed to the ED being overlooked when medication safety measures are implemented. In fact, many EDs do not have a prospective review of medication orders by a pharmacist. The success of our pilot using automated dispensing cabinets (ADCs) profiled to the pharmacy information system suggests that these barriers can be overcome and that medication safety in the ED can be enhanced.

Starting the Journey
Methodist Le Bonheur Healthcare is a seven-hospital system in Memphis, Tennessee. The organization is committed to quality and safety, and is on a journey to implement a complete electronic medical record (EMR) by the end of 2011. Our first hospital-wide implementation of computerized provider order entry (CPOE) was in April 2008. While CPOE allowed pharmacists to begin reviewing medication orders in the ED, the ADCs were not interfaced to the pharmacy information system. Our second CPOE implementation, in early 2009, gave us more experience. As we planned our third implementation, at Methodist University Hospital, we focused on improving the safety of medication use in the ED.

The ED at Methodist University Hospital averages about 150 patient visits per day, with a high acuity and admission rate. This hospital had a pharmacist in the ED eight hours a day, seven days a week, which supported an added safety step: using the ADC profile interface in conjunction with CPOE to improve the medication use system and reduce adverse drug events. The director of pharmacy met with ED nursing leadership to discuss using the ADC profile mode to improve safety—especially to reduce preventable adverse drug events and to enhance control and oversight of narcotic usage—and gained nursing support.

We formed a planning committee that included nursing and pharmacy leadership, physicians, information systems (IS), and clinical education services. The key barrier the committee identified was the ED’s need for rapid order verification by pharmacists. The physicians agreed to support using the ADC profile interface if pharmacists could average a five-minute turnaround time. Pharmacy leadership was up for the challenge. The decision was made to implement the ADC profile interface as a pilot, starting on the same day the CPOE went live. If the pilot was successful, we would use this model in upcoming ED CPOE implementations, as well as implement the interface in the two other hospitals that already had CPOE in the ED.

The project team included the assistant director of pharmacy, the ED clinical specialist, the ED clinical director, and IS. The project’s major milestones were to establish workflows, create an override list, train the pharmacy and nursing staff, and determine technical issues with the ADC equipment that needed to be addressed.

An ED clinical pharmacist worked seven days a week from 10:00 am to 6:30 pm. The team assigned this pharmacist primary responsibility for order verification. However, the pharmacist could not be at the computer at all times given other patient care responsibilities, so we identified other pharmacists as primary and secondary backups for ED order verification. One backup was the cardiovascular intensive care unit (CVICU) pharmacist and the other worked in the hospital’s main pharmacy. During the hours not staffed by the ED clinical pharmacist, ED orders were verified by the main pharmacy team. To minimize turnaround time, laptops were purchased for the pharmacists in the ED and CVICU. 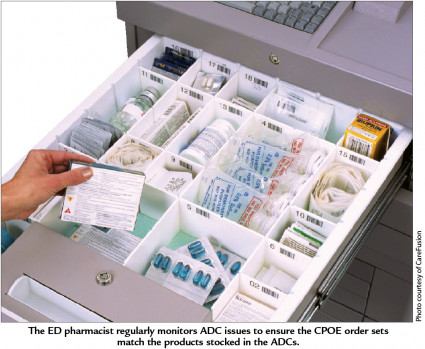 Creating Override Lists
We have a well established process for determining what drugs can be overridden in the ADCs. The lists are developed by nursing and pharmacy leaders, then presented to and approved by the system medication safety committee. The pharmacy and therapeutics committee has final approval.

For the ED override list, the ED pharmacist worked with the ED clinical director and other nurses to create an initial list of drugs, including emergency medications, many IV medications, and some low-risk oral medications. The director of pharmacy, an ED physician, and the ED medical director then reviewed the list. While the original work group expected the ED physicians to want to expand the list of drugs, they made the list more restrictive, eliminating any drug they felt could wait for the pharmacist order review. The list did remain fairly extensive, however, since the needs of ED patients and the workflow of the ED required rapid turnaround times. The intention was to monitor the list closely for inappropriate overrides and trends, and then shorten it as the pilot progressed and staff became comfortable with the work processes. The finalized list went to the medication safety and P&T committees for approval (see Table 1). 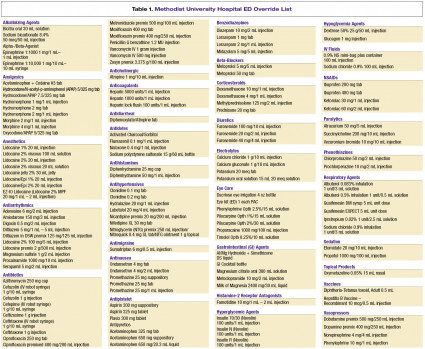 Preparing for Implementation
We had developed CPOE training for the first two ED implementations, but modifications were necessary for Methodist University Hospital to accommodate the workflow changes that accompanied use of the ADC profile interface. Clinical education services was on the project team from the beginning and modified the training material for the nurses, respiratory therapists, and pharmacists. Since we had ADCs with an interface on all the inpatient units, clinical education services adapted this training material for the ED.

On the technical side, no additional software or hardware was needed. The morning we went live, the IS department just turned on the profile mode for the ED cabinets.

Going Live and Beyond
Go-live day went very smoothly. There was 24/7 superuser support for pharmacy and nursing staff, and IS had an on-site command center to support the physicians and clinical staff. We also held daily meetings at 4:00 pm to communicate any major or complex issues that could not be handled as they came up. No major issues arose, and we discontinued these meetings after the first week.

We did have some small issues to address, especially in the first few days. The most common problem related to database issues. We found products not properly designated as floor stock in the pharmacy IS, so the pharmacist unnecessarily sent the dose after order verification. We also found the pharmacy IS was not selecting the appropriate product when the physician entered the order in CPOE. As a result, the nurse could not retrieve the medication from the ADC or had to override it. Also, the IV fluids were not all properly designated as floor stock and so labels were being generated upon order verification.

Override rates started out in the 30% range, but have since dropped to about 17%. This is significantly higher than anywhere else in the hospital, where rates range from 1% to 3%. The medication safety committee is comfortable with the rates; still, we are evaluating opportunities to make improvements. The four main categories of overrides were:

Obviously this last category was of extreme concern, and pharmacy and nursing worked closely to evaluate each situation and determine why the medication was removed. In the beginning, the ED clinical pharmacist reviewed override reports daily to identify product-specific issues that could be adjusted in the pharmacy IS or the ADC. For example, if the CPOE order set for an eye drop was preset to a 15 mL bottle but only a 5 mL product was stocked in the ADC, the order set would be modified to match the product in the ADC. This review continued for several weeks until all issues had been resolved. One of the continuing roles of the ED pharmacist is to monitor ADC issues and ensure that the products in the CPOE order sets match the products stocked in the cabinets. We also identified work process issues that needed to be addressed. For example, prior to CPOE, ED nurses were accustomed to taking verbal orders from physicians and retrieving medications from the ADC. This unsafe practice was identified and adjustments made under the direction of the ED clinical director.

Expanding the Pilot Across the System
With the pilot a success, we are rolling out the project across a seven-hospital system. Since Methodist University Hospital ED, we have successfully implemented the ADC profile mode in two more hospitals with CPOE. However, because we have not added any additional staff, implementing this system in facilities without the support of an ED pharmacist continues to be a challenge for us. Currently, we are reviewing sharing this workflow across all of these institutions, thus, allowing the midnight shift pharmacists to monitor all of the EDs and provide coverage for each other as needed.

For any hospital considering a move in this direction, the first step is to gain key stakeholder support. It is a major change from current practice in most EDs, where nurses and physicians are not used to pharmacist involvement and oversight. Our success may reflect having had a pharmacist in the ED already; since the physicians and nurses knew the value the pharmacist brought to the team, we had instant credibility. However, the absence of a pharmacist in the ED should not discourage any organization from initiating this type of project, for its goal is to reduce preventable adverse events due to medication errors. If an organization wants to provide the safest care for the patient, using the ADC profile mode with CPOE will make a significant contribution.

Strategies for a Comprehensive Diversion Program