Cleveland Clinic has invested a substantial amount of time and resources to streamline the drug distribution process—including technology implementations, pharmacy renovations, and process changes—with the goal of ensuring that medications reach patients as safely and efficiently as possible. An important step toward achieving this goal is being able to accurately track medications from central and satellite pharmacies to the floor, and we decided to employ dose-tracking technology to accomplish this. Not only does this technology allow us to track medications throughout the system in real time, helping us quickly address any missing dose calls from nursing, it also affords us access to comprehensive data to help further refine the drug distribution process.

Prior to our streamlining efforts, a dose took an average of four hours to reach its intended location, a far cry from our stated goal of 60 minutes or less. Two implementations that greatly reduced this timeline were computerized provider order entry (CPOE) and completion of our automated dispensing cabinets (ADCs) project. Pre-CPOE, significant time was spent on scanning paper orders to pharmacy and then entering and verifying the order in the pharmacy system. Shortly after rolling out CPOE at the end of 2008, the time it took for a placed order to be received in the pharmacy went from around one hour to instantly, and time spent entering and verifying an order in the pharmacy system dropped from an average of 27 to four minutes. While we had ADC technology in place, the cabinets were only used for PRN doses and controlled substances (around 10%-20% of overall doses); by mid-2008 we completed profile implementation of additional medications to be stocked in the cabinets. This changed our drug distribution model, and point-of-care dispensing increased to around 85% of doses, hugely impacting turnaround time. Through additional changes we also were able to decrease preparation and delivery time from an estimated 69 minutes to an average of 45 minutes. Figure 1 demonstrates how turnaround times decreased over the years as a result of these and other improvements.

Automating Dose Tracking
While drug distribution was substantially improved through all these enhancements, we still had no means of garnering significant dose turnaround time data. At the time, we had residents manually collect random samples of deliveries from first and second shift twice a month, and while this was helpful, there were obvious limitations, namely that our data sample was very small and the points in the process that could be measured were limited. We finally decided to automate dose tracking in 2010—first in the pharmacy in the heart center and shortly after in the main pharmacy.

The dose-tracking system was interfaced with the necessary software systems and designated scan points were integrated into our workflow. Scan points in the system track when a medication is ordered to when it is picked from the carousel or prepared in the cleanroom to pharmacist verification and then delivery on the units. Wireless and tethered bar code scanners are used to scan the order number bar code added to our labels. The system is Web-based and therefore is accessible via computers in the pharmacy; however, we also installed monitors in the central pharmacy and our satellite pharmacies to allow for real-time monitoring of doses throughout the system. Color-coding helps staff quickly identify the status of medications as they move through the drug distribution system. Green denotes an acceptable time range, yellow means close to being overdue, and red signifies overdue. 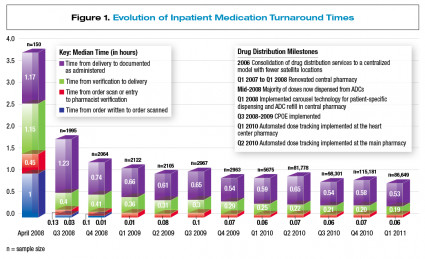 Efficiencies Gained
We reaped several benefits from automating dose tracking. Prior to this system, if nursing called us about a missing dose, locating it required much effort. Now, we can immediately uncover exactly where a dose is by looking up the order number on a computer. The system also affords quick and easy access to comprehensive dose tracking data, which was quite helpful when we were initially demonstrating the impact of drug distribution changes on meeting turnaround time goals to both nursing and administration. The data available through the system helped us
better schedule staff, including reducing the amount of technicians
required for medication deliveries. In addition, this data also served as a valuable resource when educating staff about workflow and staffing changes being made, as we could clearly explain the reasons behind the changes and later demonstrate how these changes impacted drug distribution.

While the greatest turnaround time reductions were realized with technology adoptions prior to automating dose tracking, automating this function allowed us to reduce the time doses were waiting for pharmacist verification by 25%. Because the exact location of orders are displayed on monitors in the pharmacies, pharmacists can now see in real time what is due—or overdue—allowing them to manage orders more effectively.

We also use the system to generate reports to help ensure that staff are meeting dose turnaround time goals. Managers use the daily reporting capabilities to address issues that occurred that day, and monthly and bimonthly reports are generated as well. The bimonthly report displays dose data by location, and the monthly report looks at technician compliance with expected turnaround times. In addition, we generate individual performance measures for technicians on a monthly basis to show how well they are meeting turnaround time expectations throughout the process.

The system has some additional capabilities we plan to take advantage of in the future, including using system data to determine if batching certain high-volume medications would be more efficient or if certain high-volume medications should be stocked in the ADCs. Also, we are considering setting up the system so that nursing staff can access the Web-based dose-tracking application to view their specific nursing unit orders only.

By implementing dose-tracking technology we have gained multiple efficiencies in our drug distribution process. Real-time tracking capabilities allow us to quickly and easily identify where a dose is when we need to locate it. In addition, the reporting capabilities have helped us further refine our drug distribution process, and allow us to monitor and work with technicians to ensure that doses are delivered in a timely manner. We initially implemented this technology in a single facility; due to our success, we plan to roll it out at all the hospitals in our health system by the end of 2011.

Jonathan Williams, PharmD, MS, is a pharmaceutical care manager at the Cleveland Clinic.