Given the major problems associated with manual IV preparation, from the chance of wrong drug, wrong dose, and labeling errors to the risk of contamination, implementing IV robotics allows pharmacy to automate its IV drug preparation process, thereby reducing medication errors, increasing patient safety, and lowering costs. Despite the important benefits of IV robotics, applying the use of this technology in hospitals is still in its early stages. In Pharmacy Purchasing & Products’ 2011 annual State of Pharmacy Automation survey, only 4% of pharmacy directors have adopted IV robotics.1 This low adoption rate may reflect small facility size or a low volume of IVs required, but nevertheless, hospitals that could benefit from IV robotic use should consider reaping its significant patient safety benefits.

Primary Children’s Medical Center is a 289-bed, non-profit, Level 1 trauma center that treats children with complex illness and injury. Improving the hospital culture of safety is an important requirement at Primary Children’s, due to our especially vulnerable patient population. Therefore, in 2008 we implemented robotic IV technology and produced our first live dose in early 2009.

Advantages of IV Robotic Preparation
The biggest advantages of using IV robotics are positive identification and the elimination of sources of contamination. Because our hospital is a children’s facility and many of our required doses are patient-specific, it is vital that these items are produced accurately and quickly for each patient. Once we standardize a dose we can do a batch fill, which improves efficiency.

Robotic IV technology provides four important safety verification checks. First, the technology takes measurements and verifies the size of the vial neck and weight of the vial to ensure the right drug is being entered in the correct vial size. Secondly, the system photographs the bar code on the label and compares it against the bar code in the database. Next, the final product is weighed to ensure it contains the correct amount of medication. And finally, the robot labels everything it makes, so staff is not labeling doses as they come out of the machine, eliminating the potential for human error. These four safety checks provide peace of mind that our patients’ IV medications are accurate and safe.

The technology also prevents drug cross-contamination by using clean sterile syringes to make each transfer. Additional bacterial safety benefits are realized by limiting the human interaction with the compounding process and by sanitizing critical sites on the tops of vials with a pulse UV light, which greatly reduces the risk of contamination. 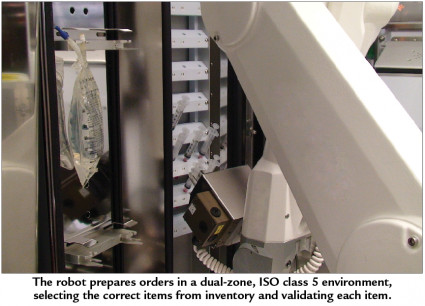 Robot Process Flow
Our robotic technology can be used in two modes: batch mode and patient-specific mode. Pharmacy-validated, patient-specific orders are imported directly to the robot from the pharmacy information system, while batch orders are entered directly into the system. The robot prepares orders in a dual-zone, ISO class 5 environment, selecting the correct items from inventory and validating each item. The vial or bag ports are then sanitized using the pulse UV system and new sterile syringes are used for each fluid transfer. Syringes and bags are weighed both before and after filling to ensure accurate dosing. Once the doses are complete, the robot affixes caps and labels and exports them directly to the cleanroom (see Figure 1). 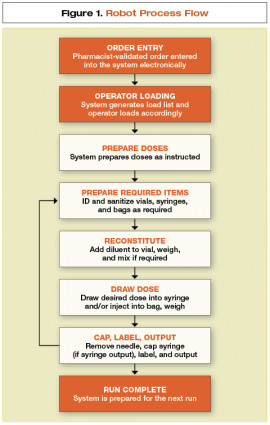 Initially we purchased the robot to help lower the rate of medication errors. Our most common pediatric medication error was overdose; the most commonly involved drugs were narcotics. Previously, because many manufacturers do not produce pediatric doses, we often stocked adult dosages of narcotics in the ADCs, a practice which contributed to overdose errors. Using the robot to produce smaller, pediatric-specific doses greatly reduces the potential for overdose. As a children’s facility we use a large number of syringes. Because the robot can process doses from 0.3 mL to 60 mL, neonatal and pediatric IV syringes are ideal to produce on the robot. We can further ensure safety as an incorrectly filled syringe will be rejected by the system. In the case where a pediatric dose is not available from the manufacturer, the robot can produce these doses with greater accuracy and better sterility than the manual compounding process.

Using the robot in batch mode is beneficial to aid in standardization of doses. Robotic IV technology is particularly useful in situations in which we are using high volume and making multiple additions. For example, when making doses of antibiotics that require reconstitution, using the robot increases safety. The robot is also ideal for patient-specific drugs, although the bulk of use at our facility is in batch mode for standardized drugs.

Because the IV robot does not use a common pathway during production, it is also ideal to use when making doses for which cross-contamination is a concern. For instance, if we are making a dose of a medication for a penicillin-sensitive patient, it is easier and safer to use the robot; because it has no common pathway, there is no danger of residual penicillin contamination from a previous dose. Due to the significant potential for patient harm if errors occur, Primary Children’s has adopted a policy that certain products, such as vancomycin stock bags, are always produced by the robot. Using the robot for the production of high-risk drugs provides further assurances of patient safety.

Robot Implementation
The development of the database and the implementation of the machine progressed smoothly. Our operations manager entered the vial/stopper measurements and checked to ensure the prepopulated data, including the correct picture and bar code, had been loaded into the database by the system’s manufacturer. During the first few months we fact-checked all the manufacturer’s prepopulated information for accuracy; no errors were discovered. When the IV robotic technology discovers a fault on a vial, in most cases we have found that these faults are due to a manufacturing problem in which the glass vial is heavier than it should be. Any faults uncovered are dealt with individually and rectified.

From a time investment perspective, the most significant step in developing the database was correctly measuring the various vials and entering their dimensions, including the size of the vial and the depth of the stopper. Dedicating sufficient time to this task to ensure accuracy is important because any measurements not matching the specifications will be rejected automatically by the robot. Once this step was complete, very little needed to take place before going live.

Fortunately, our implementation process was completed ahead of schedule. Bringing in and setting up the equipment took about six weeks, and after that period it took about three additional weeks to fine tune our process.

Training
The implementation of new technology always involves additional staff training to ensure a mastery of the process mechanics and an understanding of the goals driving the change, but in this case the learning curve was minimal. We spent one day training staff, and followed up this training with an observation period to assess staff competency in using the new technology. No significant issues were noted, as staff quickly grew accustomed to using the IV robot.

Process Validation
A process validation for sterility is performed using TSB broth on a daily basis to check for contamination; so far we have not had any incidents. Throughout the first few months after implementation every syringe was validated to make sure it was correct. However, after checking every syringe for a length of time and never finding any errors, we felt secure in the accuracy of the technology and discontinued this step, focusing our time instead on verifying the accuracy of those syringes that are still made manually.

Fine-tuning the Process
One issue that became apparent early in the process involved the poke limit of certain vials. The robot puts a beveled needle through the vial top in the same place each time when making a dose, cutting a half circle. Depending on the durability of the stopper material, there were occasions where repeated needle access would tear a full circle in the stopper and the core would drop into the solution. To remedy this we switched manufacturers, but we are also considering using a different type of needle to prevent tearing. Fixing this challenge permanently is a project that is still in process.

Another future consideration at Primary Children’s is the acquisition of a second robot to automate the compounding of chemotherapy. Automating this process would provide clear safety improvements for both patients and staff. While we would not gain the efficiencies of batch production as our chemotherapy doses are patient-specific, the added protection this automation provides to compounding staff and the increased patient safety are driving our consideration of this possible acquisition.

Results
The safety benefits and peace of mind that come with the improvement in patient care have been the most significant benefits of the robotic IV system. Initially we thought the technology would speed up the IV preparation process, but upon evaluation, we found that manual and robotic IV preparation take approximately the same amount of time; with either approach, about 60 syringes are produced per hour. This number varies, however, as it is affected by the individual characteristics of the product being made. And unlike manual compounding, the robot has the advantage of being able to work around the clock. The impressive benefits this technology has built in to our IV preparation process have assuaged our safety concerns significantly, and both pharmacy leaders and administration are convinced of its utility in our hospital.

Kevin Jones, RPh, MBA, has been director of pharmacy at Primary Children’s Medical Center, a hospital that is part of the Intermountain Healthcare network, in Salt Lake City, for the past 16 years. He received his bachelors of pharmacy and masters of business administration from the University of Wyoming. Kevin is a member of Intermountain Healthcare’s pharmacy executive team, system-wide P&T committee, and pharmacy directors’ committee.