The inaugural USP Chapter <797> Compliance Study was published in the October 2011 issue of Pharmacy Purchasing & Products and is available online at www.pppmag.com/ComplianceStudy . The comprehensive results from this survey not only provide data to measure the success of pharmacies’ efforts in complying with sterile compounding requirements, but also offer access to the tools necessary to continually improve sterile compounding practices. Though deciphering

differences in overall compliance scores based on certain variables was not one of the stated purposes of the USP <797> Compliance Study, upon review and analysis it was observed that statistically significant differences existed in compliance scores based upon state regulatory status. These differences are important and should be of interest to the National Boards of Pharmacy (NABP). Although it has been eight years since USP Chapter <797> became the official standard for sterile compounding practices in the United States, not all states require compliance with the Chapter. Analysis of the study data also identified some other interesting, though not necessarily statistically significant, relationships between overall compliance scores and certain other variables, such as equipment use, inspection findings, compounding volume, and hospital size.

Comparing Results by State Status
To quantify the results from the USP <797> Compliance Study by the status level of the respondents’ states, the data was grouped according to state status. The results are summarized in Table 2. All statistical testing of overall compliance scores were exploratory in nature. Therefore, adjustments for multiple comparisons were not made. Independent t-tests were used to compare differences in overall compliance scores between the three groups (none, indirect, and direct) defined by the amount of state regulation of sterile compounding. The Satterthwaite formula for degrees of freedom was used when two groups had unequal variances.

The mean difference (1.48%) in the overall compliance scores between indirect states and no reference states was not statistically significant (p=0.3407). However, both indirect and no reference states had statistically significant lower overall compliance scores when compared to direct states (-2.28%, p=0.0302; -3.75%, p=0.0248, respectively). (See Figure 1.) 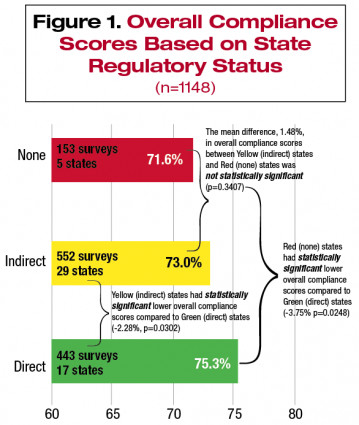 The data indicates that when state boards of pharmacy—like those in the direct states—require compliance with <797>, pharmacies performing sterile compounding comply more effectively with the provisions of <797>, at least according to the self-reported data from the 2011 USP <797> Compliance Study. The FDA may use its enforcement discretion regarding USP Chapter <797>, and while the FDA makes no secret of its concern about preventable patient morbidity and mortality related to poor pharmacy sterile compounding practices, the agency’s core mission is to ensure that human drugs are safe and effective. This is achieved primarily through the oversight of drug manufacturing operations, amongst other responsibilities. Since pharmacy practices are directly and principally overseen by state boards of pharmacy, given the data presented here, it is imperative for those states with no reference or indirect reference to the chapter to require compliance with <797> to improve compliance and thus ensure that patients are receiving quality compounded medications. The National Association of Boards of Pharmacy (NABP) can use these data as a call to action to all states to follow suit.

Identifying Preliminary Relationships Affecting Compliance
The data that follow present some interesting pictures of potential relationships but should not be interpreted as having established statistical significance. Since this study is the first of its kind, it only begins to explore potential relationships between compliance and other attributes of a population. In 2012, the study team plans to engage a statistician to perform analysis to identify whether any relationships exist between key variables and compliance scores. Those that are presented in the remainder of this article have not been tested for statistical significance. The trend lines, where applied, are simply logarithmic trend lines applied to the data using Microsoft Excel. 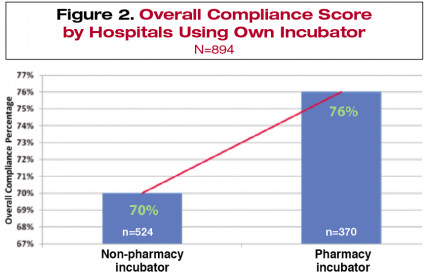 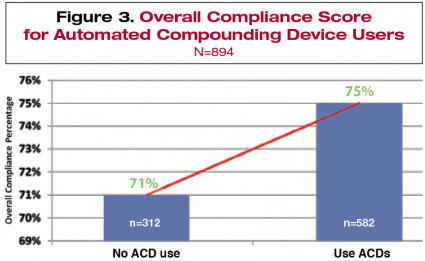 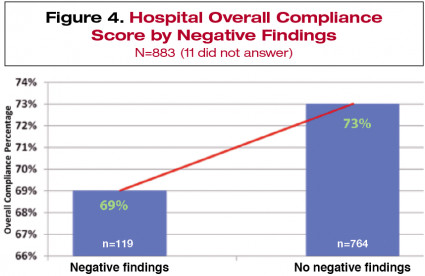 Effect of Operation Size on Compliance Scores
Within the study, there were several methods to measure the size of sterile compounding operations, however, the most effective at demonstrating accurate data for all providers was the number of compounded sterile preparations (CSPs) prepared per week. There was a trend toward higher overall compliance scores as the number of CSPs compounded weekly increased (see Figure 5). 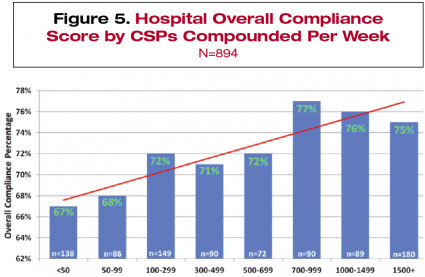 Finally we examined hospital size by numbers of hospital beds and the effect on compliance rates (see Figure 6). Again there is a definite trend toward higher <797> compliance as hospital size increases. It would stand to reason that larger hospitals may have more funds available for the capital expenditures required at most sterile compounding facilities. There are also certain economies of scale that are realized in larger operations that may facilitate improved compliance with USP Chapter <797>. 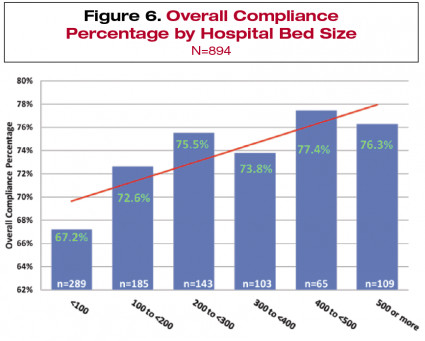 Conclusion
With the exception of state regulatory status, the other variables mentioned herein may or may not significantly affect compliance scores. Nonetheless, they are certainly interesting to contemplate and merit further study as additional data is collected and trends become more evident each year with this annual survey. One trend is quite clear, however, pharmacies in states that require compliance with USP Chapter <797> Pharmaceutical Compounding – Sterile Preparations achieve statistically significant higher compounding scores than pharmacies performing sterile compounding in states with little or no sterile compounding regulations. This presents an opportunity for those states with lower compliance rates to significantly improve their compounding practices and raise patient safety. By repeating this survey on an annual basis, we can identify the characteristics of those facilities that are most accomplished at achieving compliance to <797> so that others may adopt the traits that lead to success.

Kate Douglass, MS, RN, APN,C, CRNI is the president of Performance Strategies, Inc. Eric Kastango, RPh, MBA, FASHP is the president, CEO, and owner of Clinical IQ, LLC. Both Kate and Eric serve as the study directors for the USP <797> Compliance Survey. Peter Cantor, is the study coordinator. Address correspondence to Kate Douglass at kdouglass@performancestrategies.info

Maximize the Utility of Pharmacy Automation