Adjusting to the New World of Outsourced Compounding

Since 2012, hospital pharmacy practice has undergone significant changes in regard to contracting for outsourced compounding services due in large part to the well-publicized case of contaminated, compounded corticosteroid preparations made by an outsourcer and sent to numerous health care facilities throughout the nation. The resulting fallout of this tragedy was significant, and the federal government brought its weight to bear in passing the Drug Quality and Security Act giving the FDA broader authority to regulate and monitor the manufacturing of compounded medications.

Both the tragedy itself and the resulting legislation created a new reality for the practice of outsourcing medication preparations, and as a former medication safety specialist and current supervisor of centralized pharmacy services at North Shore-LIJ Health System in New York, we worked quickly to address any shortcomings in our own practices and actively prepare for this new reality in a safe and progressive manner. After this tragedy was realized, our immediate step was to create a temporary task force that included system-wide leadership representing our pharmacy, quality control, infection prevention, contracting, and legal departments to evaluate our processes and ensure the best quality and safest services for our patients. Upon concluding this group review, we were able to implement other changes to refine our practices and adapt to this new reality of drug preparation and acquisition.

Impact of a Sudden Practice Change
Pharmacy departments across the US utilize outsourced compounding vendors for a host of reasons ranging from a lack of human capital to inadequate space to accommodate the appropriate primary engineering controls to ensure safe and compliant compounding. In a health system of 17 hospitals such as North Shore-LIJ, these challenges can vary drastically from site to site. During the early phase of the 2012 outbreak when our ability to rely on outsourced vendors dramatically and suddenly disappeared, pharmacy directors and managers in our system were left with a significant gap to fill in order to maintain safe and uninterrupted patient care. As we began to insource many of the sterile products previously prepared by third party pharmacies, our cleanroom workload increased exponentially. This required substantial changes to our staffing model in order to accommodate necessary compounding personnel. In addition to the urgent extra training and competency assessments that had to be completed, physical compounding space constraints frequently necessitated scheduling more evening and night shifts to gain greater efficiency from our fixed compounding assets.

Some sites in our health system were able to add additional staff to bolster compounding efforts, but this was more a function of expediting the recruitment of FTEs already planned for in the budget. Given the uncertainty surrounding payment reform and health care reform in general, we were already managing a lean staff model. In order to obtain the additional compounding personnel needed, we had to shift responsibilities and scale back on other improvement projects, as well as provide overtime to staff that took second and third shift assignments.

Despite the great challenges created by these changes, we were able to utilize this situation as an opportunity to reevaluate practices that had not been critically assessed for some time. In some instances, we identified concentrations or preparations that had been outsourced due to prescriber preferences, but could no longer be justified given the circumstances. We also were able to move a few preparations towards similar drug products that were commercially available.

Outsourcing Value and Finding Alternate Methods
As with most health systems that feature several locations and service types, the decision to outsource certain compounded preparations was multifactorial and heterogeneous amongst the different institutions. Some sites lacked the appropriate engineering controls to prepare sterile preparations with desirable beyond use dating (BUD), and the capital budget and physical space required to adopt such technology was prohibitive. Other sites may have had adequate space, but lacked the quantity and complement of staff necessary to prepare all the sterile preparations required. Furthermore, specific dosage forms such as elastomeric pumps and specialized syringes also were challenging and time consuming to produce without designated equipment. Thus, outsourcing has long since been a lifeline for many hospital pharmacies.

Due to these and other issues that necessitated using outsourcers, we had to find ways to improve medication acquisition and distribution activities within our own walls. One example of this is when we adopted a new binary connector system, which allowed us to decrease compounding volume for select preparations as well as take advantage of improved BUD. As with any operational change that affects the manner in which medications are manipulated, we thoroughly researched the performance of each system under consideration prior to selection. Thus, as part of the evaluation process for proprietary vial and bag systems presented to the health system, we made sure to vet each vendor’s container closure integrity data and BUD information to make sure it met our stringent standards. We also used this practice change as an opportunity to maximize the use of such systems and thereby minimize the need to prepare non-sterile preparations in our cleanrooms. When it came to assigning BUD for our compounded sterile preparations, we decided a distinctly conservative approach was necessary and in the best interests of our patients’ safety.

Challenges of Not Outsourcing
Concomitant to certain pharmacy practices (such as taking a highly prudent approach to BUD assignment) is an increase in waste and this was one of the most apparent issues we encountered once we moved the bulk of medication production in-house. Products that were previously procured featuring extended BUD were now being discarded after 24 hours. In addition to the hard costs associated with this waste, department leadership also had to address logistical issues, such as more frequent trips to automated dispensing cabinets (ADCs) to rotate inventory and processes to manage the increase in pharmaceutical waste.

Beyond internal logistics, the most profound issue that has further complicated the matters of compounded drug production is the continued prevalence of national drug shortages. Many times in the past, we were forced to turn to outsourcing pharmacies for preparations simply because we were unable to procure them through our traditional pharmaceutical vendors. With this option eliminated, we had to make some very difficult decisions in order to ensure a continued supply of safe pharmaceuticals to care for our patients. Some hospitals across the country turned to high-risk compounding from non-sterile active pharmaceutical ingredients. Given the lack of appropriate resources to perform this, as well as hesitance from a safety standpoint, we focused on leveraging our internal inventory and allocations to move product between health system sites whenever possible, thus maximizing all available system resources. Upon exhausting this option, we engaged our clinical pharmacists and physician leadership to develop alternate pharmaceutical care strategies. This comes with many downstream effects however, and had to be carefully considered. Such change frequently required modifications to our computerized prescriber order entry (CPOE) systems, smart pump data sets, and various other electronic systems involved in patient care. There also were risks associated with changing prescriber preferences to utilize agents they are less familiar with, a practice many physicians are reluctant to entertain. For these reasons, we would always do our best to exhaust all other strategies to safely procure product prior to pushing alternative therapies. 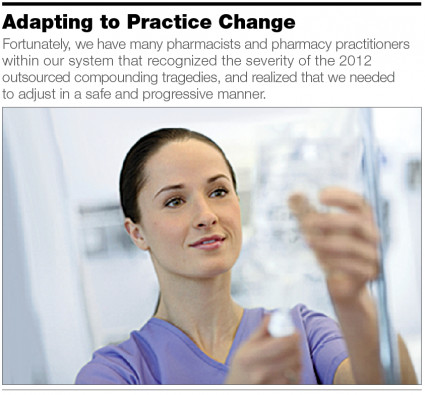 Moving Forward
Fortunately, we have many pharmacists and pharmacy practitioners within our system that recognized the severity of the 2012 outsourced compounding tragedies, and realized that we needed to adjust in a safe and progressive manner. Thus, ensuring proper training and competency validation were substantial actions we had to consider when moving so much medication production in-house. In order to properly engage staff members that were not used to participating in sterile product preparation, managers had to focus their efforts on making sure all the necessary USP <797> personnel requirements were met, including implementing the required competency assessments to address the compounding of many new items not previously prepared in-house. Just one example is the numerous vasopressors we dispense in a syringe format for our anesthesiologists—a change we adopted some time ago to improve medication safety within our ORs. Previously, we outsourced many of these products, and given our substantial surgical volume, this equated to an enormous number of daily-dispensed syringes that had to be brought in and compounded in-house. This was one area in which we moved quickly to ensure proper training and competency on automation and hardware that enabled us to produce the syringes most efficiently.

Moreover, adjusting to the new regulatory and accreditation attention being paid to all compounding activities (both in-house and outsourced) has further emphasized the need for proper due diligence into all outsourced relationships. Prior to developing a relationship with a contracted patient care service provider, the due diligence process most certainly should involve investigation into the organization’s operations and quality controls. This process will ideally include a site visit. Obviously such an excursion is not always operationally sound and can be further complicated by the fact that when it comes to evaluating an outsourcer’s sterile products physical plant and procedures, even the most savvy, knowledgeable, and experienced of sterile preparation pharmacy managers may be unfamiliar with all the statutes, rules, regulations, and quality requirements for such a facility. In these circumstances, it is advisable to utilize one of the evaluation tools freely available and additionally consider engaging a qualified and experienced consultant specializing in this area.

It would be inconceivable for many hospitals across the country to discontinue the use of outsourced drug preparations altogether, but after 2012, it also is highly prudent to take extra precautions when outsourcing. Accordingly, North Shore-LIJ currently works with a very limited number of thoroughly vetted outsourcers for a limited number of preparations. We have faith in these providers and have performed the necessary due diligence (and have on-going monitoring in place) to ensure preparation quality. For some high volume preparations, such as OR syringes and oxytocin infusions for labor and delivery, we are able to outsource again, and this has helped relieve the burden from our cleanroom staff.

Lee Fiebert, PharmD, BCPS, CPHQ, is the supervisor of centralized pharmacy services for the North Shore-LIJ Health System in Great Neck, New York. He received his PharmD from St. John’s University’s College of Pharmacy and Health Sciences in Queens, New York, and is in the process of pursuing an MBA from Hofstra University’s Frank G. Zarb School of Business in Hempstead, New York. Lee completed his PGY1 pharmacy residency at Long Island Jewish Medical Center in New Hyde Park, New York, and his PGY2 health system pharmacy administration residency at the Veterans Affairs Medical Center in Lebanon, Pennsylvania. His professional interests include medication safety, pharmacy administration, and technology and automation. 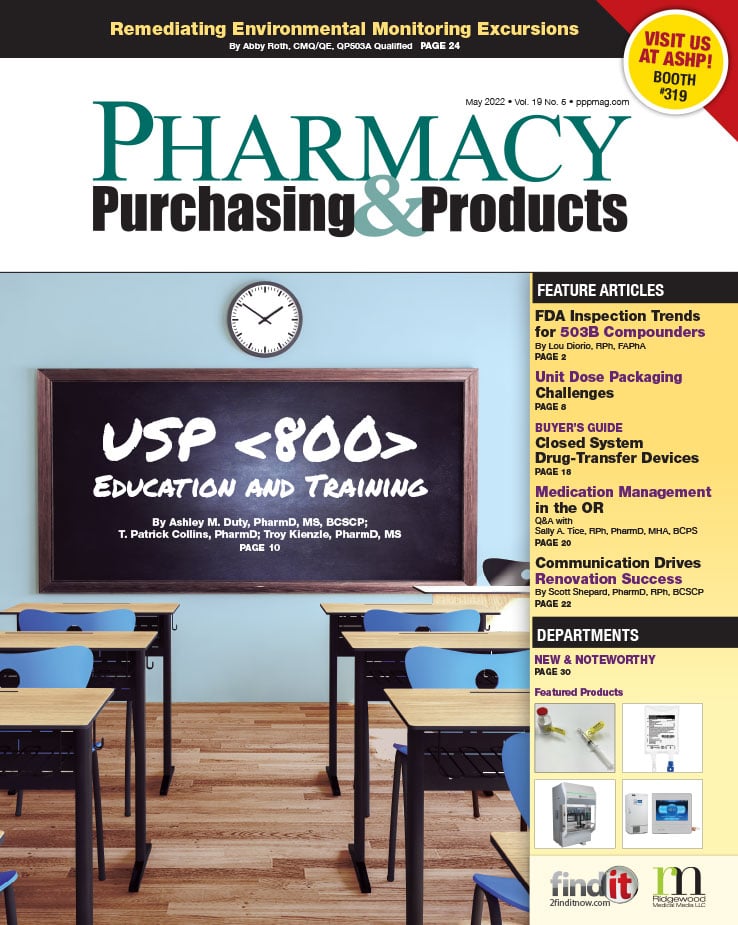