IV dispensing errors are a serious concern in hospital pharmacy given the critical nature of the medications and their high and immediate potential for patient harm. Because many IV preparations appear as clear solutions without any easily distinguishable differences, accuracy often relies entirely on the skill and vigilance of those preparing these products.

Cincinnati Children’s Hospital Medical Center (CCHMC), a nonprofit academic medical center established in 1883, is one of the oldest pediatric hospitals in the United States. With nearly 600 registered beds, CCHMC had more than 1.1 million patient encounters and served patients from 53 countries and all 50 states in fiscal year 2013. The 24/7 pharmacy is a comprehensive inpatient care department with clinical specialists in 24 areas. It also provides clinical care in the outpatient setting, in close coordination with home care services. The CCHMC pharmacy has a highly technical inpatient dispensing system that relies heavily on automation to ensure accuracy, expedite delivery of medications, and control costs. The pharmacy dispenses nearly 8,000 doses of medications daily through automated devices that include medication management systems and robotic packagers.

Leveraging Technology to Offset Risk
To address the risk factors associated with IV medication preparation, the pharmacy had previously explored automated verification systems. Initially considered were rapid analysis products, such as refractive index and fingerprinting devices, but these were found to be limited in scope, slow in processing, and cost-prohibitive. With the movement toward bar code medication administration and the expanding availability of bar coded medications, the pharmacy shifted its focus toward point-of-production bar code verification systems. Although the primary motivation in selecting a system was ensuring patient safety, additional goals were streamlining workflow and workload, optimizing employee assignments, and decreasing IV waste.

In 2012, we chose an IV workflow automation tool that addressed all of these needs. Key to our system selection was the dispense-checking function that could verify product accuracy at the initiation of production. As part of the evaluation process, pharmacy staff consulted extensively with the IV workflow software vendor and visited other institutions using the technology to evaluate performance, understand implementation challenges, and assess the impact of the system on workflow and waste.

Implementing a New Workflow
The process of automating IV workflow was challenging. To begin, every medication that will be tracked in the system must be added to the database by identifying each product type and developing a standardized process for product entry. Maintenance of NDC numbers is critical to ensuring that all products are added to the database and that the correct product is recognized during the production process.

Building the formulary and configuring the medications required a significant time commitment; our implementation consisted of 6 months of file-building time, 16 hours of training for super users, and 4 hours of training for each staff member. The pharmacy rolled out the IV workflow system in stages, starting with stock production and a few select antibiotics and then gradually adding additional items. Currently, diluted medications are fully implemented, and we are working through the addition of compounded items.

Successful and smooth implementation requires a thorough review of processes with an eye toward matching processes to software capabilities, strict attention to detail with regard to appropriate product identification and formulary maintenance, and intensive training of staff.

Every hood in the IV room is now equipped with a workstation, printer, and camera. The workstation screen prompts the technician through each step of the process. Every medication is configured using standard operating procedures and can be customized as necessary.

When a medication is ordered or requested within a particular time frame, the system receives this request from the hospital information system and displays it on the workstations in a queue for dispensing. The technician begins dose preparation by picking an order from the queue and generating a label. The technician then retrieves the product and scans the bar code. If the scanned information does not match the information in the database, the product is rejected, and the technician is alerted to retrieve the correct product. The system takes photographs at each step in the process to enable remote checking by the pharmacist. Once a product order is complete, it appears in a queue for the pharmacist to verify.

The pharmacist logs onto a Web page to view the process, verify that the correct product was used, visually check volumes, and accept the order, which is then sorted for delivery. This process allows the technician to proceed to the next order and for the pharmacist to verify the product without impeding workflow. It also ensures that the process is documented, the lot number is trackable, and the record is easily retrievable.

Wrestling with Resistance
Although CCHMC provided adequate infrastructure, database building support, and training, staff initially resisted implementation of the IV workflow system, citing concerns about the time commitment the new system would require, as well as the difficulty of using the new software in addition to the existing EHR. Furthermore, because remote checking is not sanctioned by the Ohio Board of Pharmacy, the photo documentation of each step of the compounding process appeared superfluous to end users. We use this feature only as a back-up—the pharmacist reviews the actual container and the final product to verify that it is correct.

Pharmacy attempted to mitigate concern about additional work by switching to multiple daily IV fills, which, because of medication discontinuations, successfully reduced workload by about 10%. Nevertheless, the new process remained more time-consuming than the previous one.

To help allay frustration, pharmacy tried to keep the focus on the additional safety the software provided rather than emphasizing efficiency or speed. Moreover, enabling automatic queuing of orders and expediting multiple daily fills by creating labels as needed—instead of having long lead times—was producing significant savings in time and money. Although staff initially perceived that the system would require additional time, in practice, managing workflow in a just-in-time manner has leveled the workload by balancing periods of high and low volume with mini-batches that have become part of the normal flow of orders.

The Proof Is in the Results
After the IV workflow automation system was in place for one year, pharmacy conducted a collaborative study to identify the variables (eg, shift, workload, etc) associated with the IV preparation errors detected by the automated system so we could implement quality improvement strategies. The analysis included 3 months of IV compounding data from the EHR and IV dispensing error data from the new system. The results showed the total number of IV doses dispensed by the new system during the study period was 113,617 (see TABLE 1). Of the 682 IV dispensing errors identified during the study period, the vast majority were identified by the system during the preparation steps, although the pharmacist did catch some errors upon inspection.

The types of errors that were identified by the system often differed from those identified by the pharmacists upon inspection. During the preparation stage, the most common errors exposed by the system were incorrect drug, incorrect diluent, and product expired (see TABLE 2). The errors discovered by pharmacists included wrong volume, dose damaged, and expired product. Among the total number of errors, 91 (13.34%) were due to look-alike/sound-alike (LASA) drugs (see TABLE 3). The data also revealed that most errors occurred on Mondays (17.7%), while the fewest errors occurred on Tuesdays (11.9%) (see TABLE 4). The third shift had the lowest error rate by workload (0.38%), while the first and second shift experienced identical error rates (0.78%) (see TABLE 5). Pharmacy plans to conduct further regression analysis to determine the relationship between these variables and IV compounding errors, and their clinical significance. 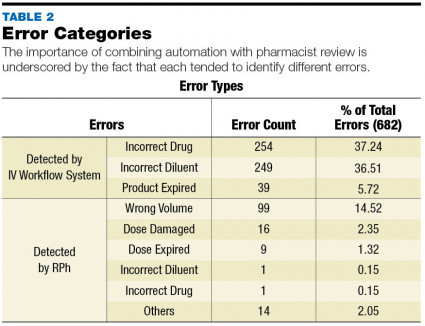 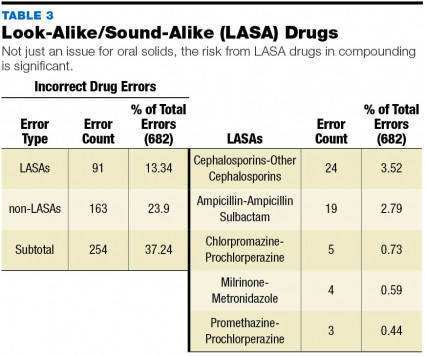 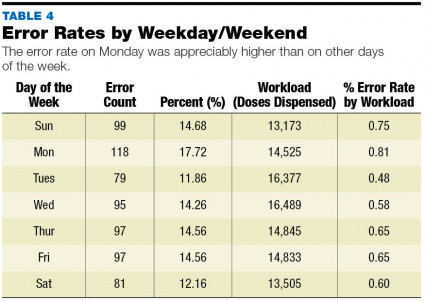 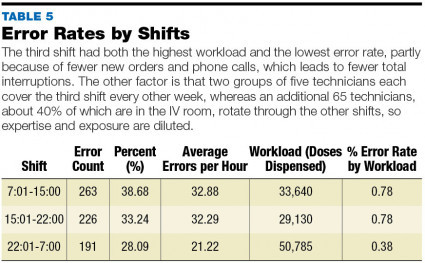 The results indicated that errors due to incorrect drug, incorrect diluent, and expired product constituted the bulk of IV compounding errors (79.4% of all errors), and that by automating IV workflow, approximately 80% of IV dispensing errors could be prevented, especially those involving the incorrect drug and/or diluent. LASA errors were a major factor, constituting over one-third of the incorrect drug errors. It is important to note that the IV workflow automation system cannot detect volume errors or damaged product errors, which still must be identified by pharmacists.

Future Goals
The IV workflow management system does not currently interface bi-directionally with our EHR. Transmission to the EHR of microsystem data, such as the entire timeline of an order from verification through administration with the capability for common viewing and shared verification, would be extremely useful and is in development. We plan to expand the use of the system to include all of our IV preparations system-wide by the end of this fiscal year.

Our study provides a compelling case for developing effective strategies to reduce IV dispensing errors. In addition to managing workflow, new system upgrades, including a time-stamp feature, provide a host of data, such as time in queue, time in process, number of doses per hour, drug, and user. Mining such data can help identify problems, as well as optimize prioritization, productivity, and, most importantly, patient safety.

John Hingl, RPh, MBA, is the director of pharmacy operations at Cincinnati Children’s Hospital Medical Center. He received his MBA from the Lindner College of Business and his BS in pharmacy from the College of Pharmacy, both at the University of Cincinnati. His professional interests include pharmacy automation, Lean process improvement, and resource optimization.

Yihong Deng is a graduate student in the division of pharmacy practice and administrative sciences at The James L. Winkle College of Pharmacy, University of Cincinnati. Her professional interests include research in pharmacy operations, medication use system optimization, and applying the Lean philosophy to health care.

Alex C. Lin, PhD, is assistant professor of pharmacy systems and administration in the division of pharmacy practice and administrative sciences at The James L. Winkle College of Pharmacy, University of Cincinnati. His research interests include improving medication use systems, applying automation technologies to medication use systems, and applying computer simulation approaches and the Lean process in pharmacy operation studies. 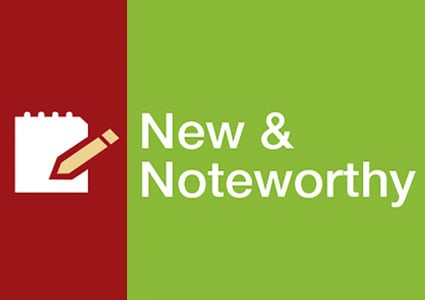