Any hospital pharmacy that produces and distributes compounded sterile preparations (CSPs) is aware of the potential impact from medication order changes and cancellations, or any other action that requires the pharmacy to reproduce and re-dispense (or waste) a CSP. Accordingly, various CSP workflow management technologies are often used in the effort to exert greater control over production and distribution processes. However, a facility cannot simply acquire CSP workflow technology and expect it to be effective without staff buy-in. As CSP management systems continue to evolve and become increasingly sophisticated, pharmacy must find ways to integrate these systems into a custom workflow such that front-line staff recognize their value and optimize their use.

At Duke University Hospital (Duke) in Durham, North Carolina, the pharmacy’s sterile preparations cleanroom is tasked with compounding custom, highly complex therapies, and dispenses over 2,100 IV fluids and syringes daily. The pharmacy department at Duke, in collaboration with non-pharmacy colleagues, has developed and adopted a number of error-prevention strategies related to IV preparation safety, with a particular focus on bar code technology. Currently, Duke relies on the pharmacy module within the facility-wide electronic health record (EHR) to provide a number of functions that contribute to efficient sterile compounding workflow.

Starting with an Efficient Interface
The inpatient operations division of Duke’s pharmacy department is responsible for sterile compounding and unit dose distribution. Within the cleanroom, the pharmacy module of our facility EHR provides functions for queuing, preparing, and verifying all CSPs prior to distribution and administration.

During the initial stages of CSP order preparation, the queue function provides cleanroom technicians with improved organization and control over the sterile compounding workflow. Duke’s previous pharmacy information system functioned as many do by automatically printing labels as orders were verified (for new orders) or as batches were run. A significant benefit of the current system’s queuing function is that it produces an electronic list on a computer screen, from which a technician or pharmacist may sort and filter medication orders, controlling when individual labels print. This queuing functionality offers a number of advantages, among them:

CSP Preparation and Verification
The CSP workflow preparation function of our EHR’s pharmacy module  is used in the cleanroom, as well as some other pharmacy areas (eg, additional verification of high alert drugs, non-sterile compounding). The preparation function begins with a scan of the 2D bar code located on the patient-specific label (just produced, on demand via the queue function), and a scan of the bar code on each ingredient in the dose. Thus, for each CSP, all components in the dose appear onscreen, are recorded, and are accounted for by the technician as he or she scans each product’s bar code. This serves two key purposes: Validation of product selection (a step of critical importance in a sterile compounding environment given the number of look-alike/sound-alike drugs) and compounding documentation (lot number and expiration of the source products).

Once the dose has been compounded, it moves to the verification stage. Duke’s EHR pharmacy module provides a checking function that allows the pharmacist verifying the CSP to electronically sign off on the dose preparation after reviewing the processes described above. The combined features of queuing, preparing, and verifying each CSP produced provides a solid data source for post-compounding processes. Time stamps and persons responsible for order verification, label queuing, label printing, dose preparation, and dose verification are easily retrievable in the EHR for activities such as tracking stat or missing doses, managing recalls, or auditing medication safety events.

Transitioning Technologies
At the time of facility-wide EHR implementation (in mid-2013), Duke’s decision to pursue the relatively new functions of electronic order queuing, bar coded documentation for CSP preparation, and data-assisted CSP verification was motivated in large part by the desire to mirror functions of our previous pharmacy information system. Duke had originally designed and implemented a homegrown dose verification system (known as ScanIV; featured in the July 2010 issue of PP&P). This system had similar functionality to our current preparation process in that the dose label was scanned to bring up the order in the system and manufacturer bar codes were scanned to verify product selection. The complimentary functions of queuing and verification fit logically into this workflow.

Dose Tracking Outside the Pharmacy
In order to close the loop between medication preparation and administration, Duke uses a hybrid of two technologies to manage overall IV workflow. The previously mentioned tools within our EHR are helpful in guiding internal pharmacy workflows as well as handling communication between pharmacy and nursing. The EHR also houses a number of data points of interest as we are able to extract provider order time, pharmacist verification time, label print time, time of dose compounding, and pharmacist check. By leveraging the queuing, preparation, and checking functions, the majority of our internal pharmacy processes are captured and monitored.

The second part of the system involves tracking CSPs outside of the pharmacy. In June 2014, Duke pharmacy implemented a mobile dose tracking device and software system, which completes the data cycle by tracking the time of dose pickup and drop off, as well as location and storage conditions (ie, patient specific bin, refrigerator, IV pegboard, or respiratory specific storage). This information can then be tied with our bar coded medication administration (BCMA) system to create a picture of the entire medication-use process from order onset through administration.

The dose tracking software is highly configurable and mobile, providing decision support for delivery technicians to avoid sending the dose to the wrong unit or placing it under incorrect storage conditions (eg, storing a medication that requires refrigeration at room temperature). We have further leveraged the technology to alert end users when scanning a dose at the bedside whether the dose has been discontinued or transferred. If a patient transferred from one bed location to another, the system can alert the technician that the location on the label is no longer accurate and direct them to the new location.

Dose Tracking in Real Time
Because the dose tracking is available to users in real time, they can see a snapshot of where a product is in the cycle. This becomes particularly useful in managing nursing communication and responding to inquiries about doses that are presumed missing. Within the EHR we utilize a nursing-to-pharmacy electronic inbox communication tool. From the nursing electronic medication administration record (eMAR), messages easily can be sent requesting a dose to be re-dispensed, reporting a dose as missing, or other questions and comments. The messages are then routed to either a pharmacist or technician inbox based on the request type. We have found the dose tracking software to be key to efficiently and appropriately respond to these messages.

Creating Lines of Communication
Establishing direct and viable communication between disparate (but codependent) departments such as nursing and sterile compounding can be a challenge; for our team, implementing mobile dose tracking technology was a chance to engage front-line staff and design a system that would work within the context of existing IV medication workflows. The software design allows flexible
configurations and the interface is simple and easy to interact with, thereby facilitating training and troubleshooting. Prior to implementation, we assembled a project team consisting of front line pharmacists, technicians, and a manager who designed the level of specificity for location mapping and determined storage attributes to the individual drug level. The system also was configured to display storage and transport conditions, including directives on whether or not to refrigerate or send via pneumatic tube. We were able to complete the configuration in four weeks.

As always, pre-planning and sufficient training were integral to the success of our project. After providing the vendor with the information from our project team, go-live preparation involved physical labeling of locations to correspond with those programmed into the system and configuring the devices on the internal wireless network. Employee training was streamlined to a small slide set and on-site support, and due to the familiarity of the device and its app-based interface, most staff members were able to operate the devices with less than one day of support.

Conclusion
After adjusting to the functions of our EHR pharmacy module and maximizing its capabilities through queuing, preparation, and checking, followed by the implementation of the mobile dose tracking devices, we have realized improvements in several aspects of compounding workflow. An excellent measure of compounding efficiency is the volume of items re-dispensed; as such, we conducted studies of this metric over three-month periods both before and after implementation. Upon comparing the two periods, there was a statistically significant reduction in the number of doses re-dispensed (on average, greater than six percent). An analysis of the value of products re-dispensed and technician time expended in duplicate compounding revealed an avoidance of nearly $90,000 in pharmaceutical supplies and labor.

Lastly, pre- and post-implementation surveys measured staff perception of these technologies. The survey results demonstrated significant improvement in this area as staff members have come to embrace this technology and recognize its effectiveness on IV medication workflow.

Stephen Arrowood, PharmD, MHA, is manager of the sterile preparations cleanroom at Duke University Hospital. He earned his PharmD and masters of health administration from the University of North Carolina.

Matt Kelm PharmD, MHA, is the manager of unit dose distribution at Duke University Hospital. He earned this PharmD from Purdue University and his masters of health administration from the University of North Carolina. 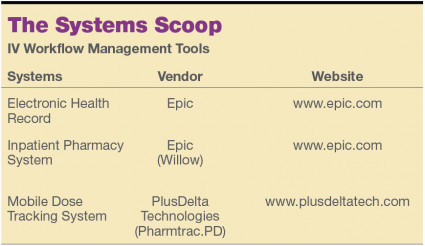 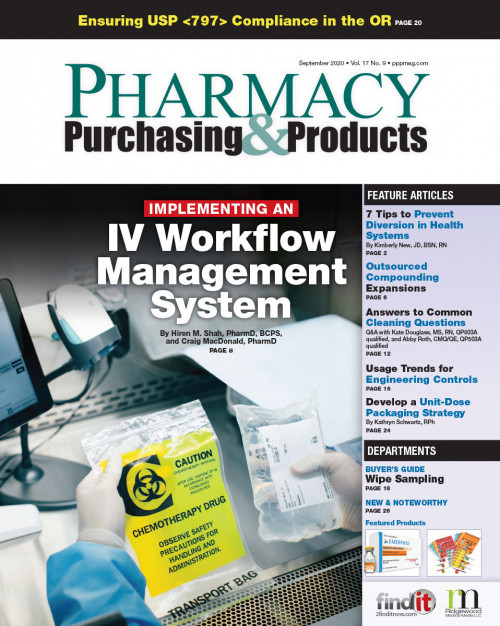