To protect patients from receiving incorrect, insufficient, or excessive doses of parenteral medications, smart infusion pumps offer key safety checks by administering preprogrammed, identified infusion doses held within pre-established limits. The value of smart pumps is derived from the utilization of medication libraries, which contain the names, concentrations, administration information, and dosing limits for each medication administered via the pumps. Maintaining strict dosing limits is a particularly beneficial safety feature as it allows for flexibility by responding to defined soft and hard limits. With hard medication limits, overdoses or sub-therapeutic dosages can be prevented outright, whereas soft limits cause the pump to alert the clinician if a programmed dose is higher or lower than the established limits for that medication. After acknowledging a soft limit alert, the clinician has the option to override that limit based on clinical need.

Additional advantages are realized through wireless connectivity, which allows for the transmission of library updates from any location, as well as the receipt of usage information, including notifications anytime a dose limit is exceeded. To realize the full benefit of this data, Southcoast Hospital Group—located in Southeastern Massachusetts and comprising three hospitals—is committed to creating well-designed reports to mine this data and drive practice improvement.

At the onset of drug administration, as the medication is programmed into the smart pump, a report is sent to the pharmacy listing the date and time administration began, the pump serial number and location, and the care area, each of which is assigned a nursing-unit-specific medication sub-library. Also included in the report are the medication name and dose, as well as any exceeded dose limits. By gathering and analyzing care-area– and patient-specific infusion data, improvements to IV medication administration in these specific areas can be targeted and changes implemented.

One of the most important smart pump reports is the Hard Limit Attempts report. A hard limit report shows where (care area) and when (date/time) a manually programmed medication dose exceeded the maximum or minimum limit allowed for a specific dose (known as the upper and lower hard-limit dose, respectively). As an example, at Southcoast Hospital Group, the IV heparin infusion upper-hard-limit dose is 5,000 units per hour and the lower-hard-limit dose is 250 units per hour. If a dose of 8,000 units per hour is manually programmed, the infusion pump will display an alert stating that the upper hard limit has been exceeded and the pump must be reprogrammed with a lower infusion dose in order to administer.

Southcoast began using smart infusion pumps for parenteral administration in 2011. Because our current infusion pumps do not have bar code scanning capability (which would display the patient name and location for each infusion on the pump after scanning the patient’s wristband bar code), IV medication infusions are not directly connected to a patient’s electronic medication administration record (eMAR). To address this, we utilize a different method to determine where an infusion is being administered using wireless signal access point (AP) locations, which are listed in smart pump reports, and are matched to a standing list of APs located throughout the hospital network.

Detailed reporting of infusion locations allows for the identification, tracking, and trending of information related to care areas and nursing units that attempt to exceed programmed hard limits (or successfully exceed soft limits) for a given medication. If a specific nursing unit is found to have a greater volume of programming attempts that exceed the upper or lower hard-limit (as compared with other nursing units), then that nursing unit may benefit from a targeted medication administration review (to ensure the hard limits are appropriate) combined with education and retraining.

The information shown in FIGURE 1 represents a single line of a Hard Limit Attempts report showing IV heparin (with tall man lettering) programmed at a dose of 6,572 units per hour at a Southcoast location of AP: 00-18-84-05-37-63. In this case, the programmed dose exceeded the IV heparin upper-hard-limit dose of 5,000 units per hour, thereby triggering an alert on the pump’s screen indicating to the nurse that the dose exceeded the upper-hard limit and required reprogramming. In such a circumstance, it is important to identify the nursing unit and pump location where the event occurred as part of our commitment to ongoing process improvement.

The electronic AP address shown in FIGURE 1 can be modified and used to indicate the specific hospital site, care unit, and general location of the physical pump. There are 470 AP locations throughout the Southcoast hospital system, each with its own distinct 12-digit address broken into six couplets. (The representation of digitized AP addresses in this manner is quite common for facilities that utilize wireless networks.) The final digit of the AP address—the number 3 in FIGURE 1—represents the name of the electronic network the individual smart pump is sending information through, and is therefore unnecessary and can be dropped. After reducing both the standing Southcoast AP list and the smart pump 12-digit report entries to an 11-digit format, comparisons can be made to indicate the specific hospital site, nursing unit/floor, and location where a smart pump infusion occurred (or was alerted and halted).

The LEFT and LEN (length) functions in Microsoft Excel can be used to automatically limit a string of characters in a data set (eg, trimming an auto-generated AP location down one character from 12 to 11). Next, Excel’s Index Match function can be used to match the smart pump location report address against the facility’s AP location list and display this information.

Once these functions have been established in a standing spreadsheet, data from a smart pump Hard Limit Attempts report (or any other type of report) can be imported. The report can be run for a specific timeframe or care area, and then customized to indicate hard-limit dosing errors for a certain drug or for all drugs in the specific smart pump’s library.

At Southcoast, a smart pump Hard Limit Attempts report is imported into a 10 column Excel spreadsheet (columns A through J) with the following column headers:

This raw data spreadsheet is then copied into a Master Location spreadsheet, wherein column K lists the LEFT/LEN function for each row to shorten the AP address, and column L lists the Index Match function to identify the pump location as shown in FIGURE 2. In this case, the pump is located in hospital site A, floor number 5, and the hospital’s device tracking number is 07. (While the “07” is a number assigned to the device to help track multiple devices per floor, it does not specify the exact location of the device.) 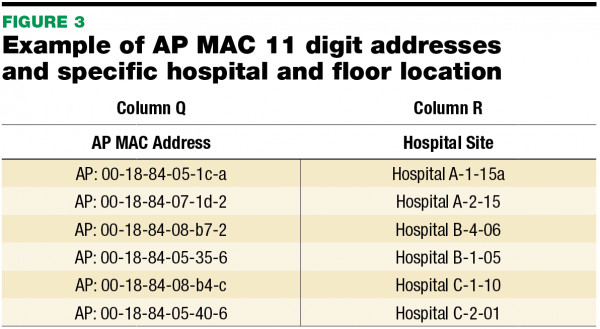 At the same time, the smart pump medication library was revised to allow fentanyl boluses to be drawn from the primary fentanyl infusion bag at a starting dose of 25 mcg with an upper-hard limit of 100 mcg. Our smart infusion pumps can be programmed with hard limits for infusion, bolus, and loading doses, and additional limits can be set regulating minimum bolus/loading dose infusion times. In our case, we set a hard minimum time limit of no less than 2 minutes for all bolus doses of fentanyl.

After implementing these changes, a fentanyl usage report was generated for the period of January through April 2014, which listed programmed medication doses that exceeded the maximum upper hard limit. The report indicated 101 instances, 62 of which were from one specific nursing unit. (Further, of those 62 hard-limit attempts, 45 involved bolus doses of 150 mcg and 200 mcg, which exceeded the upper hard limit dose of 100 mcg.) FIGURE 4 displays a slightly modified sample segment of this fentanyl report listing drug and concentration, infusion dose programmed, bolus dose programmed, and infusion location information.

Due to the large number of 150 and 200 mcg bolus attempts, it was thought that the bolus dose upper limits may need to be increased. But, the possibility of programming errors still had to be considered. A clinician may have intended to program the infusion pump to deliver a 100 mcg bolus dose, but mistakenly entered a value of 200 mcg. To address this issue, the pharmacy department began communicating with nurse management from the 2nd floor of Hospital A—the specific nursing unit that experienced 62 hard-limit attempts, per the fentanyl usage report. As a pilot study, pharmacy and nursing decided to change the bolus limits in the smart pump medication library for a 30-day trial by setting an upper soft-bolus-limit of 100 mcg and an upper hard-bolus-limit of 200 mcg.

During the trial, if a nurse programmed a fentanyl bolus dose that exceeded the upper soft limit of 100 mcg, the smart pump would issue an alert that the dose, as programmed, exceeded the upper soft limit. If this alert were overridden, that action would be listed as a double confirmation in a subsequent infusion pump usage report. However, if the programmed dose was in error, then the nurse would acknowledge the upper-soft-limit alert and re-enter a bolus dose less than 100 mcg. In the latter case, the usage report would list the action as a pull back. All Southcoast nursing and pharmacy staff members were informed of the pilot fentanyl bolus limits and the smart pump infusion library was wirelessly updated.

A smart pump Upper Soft and Hard Limits report from the period of August through mid-September 2014 listed 69 upper soft limit double confirmation instances of fentanyl bolus dose entries of 150 mcg to 200 mcg. There also were 6 pull-back instances in this report for fentanyl 150 mcg to 200 mcg bolus doses and it was noted that four out of these six instances had a repeat entry of 150 mcg to 200 mcg shortly thereafter using the same smart infusion pump listed by serial number. Given the number of double confirmation entries, the Medication Safety committee determined the higher bolus doses of 150 mcg and 200 mcg were appropriate in a significant number of cases and the revised fentanyl upper-hard and soft-limit bolus doses were continued in subsequent smart pump library revisions.

In April 2015, we performed another review of upper hard-limit bolus dose attempts for fentanyl indicating a reduction in attempts of 75 percent (see FIGURE 5).

At Southcoast, the electrical devices identified by each AP address obtain smart pump data from the individual pumps using a 360-degree, three-dimensional range. This means that on rare occasion, the device may record an infusion as being performed on the wrong floor (ie, the device may report an infusion being administered on the 3rd floor nursing unit when the infusion actually is being administered on the 2nd or 4th floor).

Keep in mind that each facility must analyze its nursing units’ dose programming attempts in the context of clinical appropriateness. An institution’s established safe maximum upper dose limit for a medication should not be changed despite multiple nursing attempts to exceed the limit, if exceeding this limit may cause patient harm. In the above-mentioned case of fentanyl bolus doses, the initial limits were deemed to be too low and the literature indicated the limits could be safely increased and remain within an acceptable dosage range.1

Michael Zolnierz, MS, RPh, is a clinical pharmacist at Southcoast Hospitals Group in Fall River, Massachusetts. He has been the Southcoast Medication Drug Library Administrator for the group’s smart infusion pumps since 2011.