The 2010 Update to the NIOSH List of Hazardous Drugs

When NIOSH first published the alert Preventing Occupational Exposure to Antineoplastic and Other Hazardous Drugs in Health Care Settings in September 2004, the driving motivator was to provide health care workers, and their employers, with information on the risks of working with hazardous drugs, as well as measures they could take to protect their health. In the 2004 alert, it was proposed that the list be revised on an annual basis in order to continually provide the most up-to-date information to those workers who may come in contact with hazardous drugs throughout the process of receiving, handling, administration, and disposal. Although annually revising the list has proven untenable, an update to the original listing of NIOSH-designated hazardous drugs was released this past September.

The impetus behind the update was simple: As the FDA approves new drugs each year, they need to be evaluated to determine their potential to be occupational hazards. In addition, the FDA issues warnings—typically in the form of black box warnings—on existing drugs based on the post-marketing discovery of adverse effects in patients. Following the publication of the initial alert, NIOSH has tracked, and systematically reviewed, all new drug approvals and new warnings issued by the FDA in order to augment the original list.

2010 Update Process
When NIOSH began developing the 2004 alert, they made use of lists provided from several institutions that were available at the time including the National Institutes of Health and Johns Hopkins Hospital. For the 2010 update, NIOSH enacted a major change to the drug review process; instead of relying on lists developed by other organizations, NIOSH initiated a comprehensive approach to identifying hazardous drugs that included considerable input from a 10-member peer review panel, stakeholders, and other affected or interested groups such as drug manufacturers, pharmacy and nursing organizations, and individual institutions. As defined in the original NIOSH alert, drugs are classified as hazardous if studies in animals or humans indicate that exposures to them have a potential for causing cancer, developmental or reproductive toxicity, or harm to organs. This definition was applied to all potential drug candidates released since 2004 during the NIOSH evaluation.

NIOSH adheres to specific guidelines when disseminating highly influential information, and the evaluation of new drugs and existing drugs with new warnings since 2004 followed a very rigorous process. First, an internal NIOSH committee was formed to perform initial evaluations. This committee evaluated 147 drugs and proposed a revised list of 62 drugs for further evaluation. Following this, a panel of 10 expert peer reviewers examined the revised list of 62, and NIOSH disseminated two Federal Register Notices soliciting public and stakeholder comments. After a final round of supplemental reviews by the NIOSH committee, 21 new drugs were added to the existing 2004 list, bringing the total number of drugs on the list to 157 (see Table 1). These drugs represent the time frame of newly released drugs or drugs with new warnings between the publication of the first alert in the fall of 2004 and the fall of 2006. In order to keep pace with ongoing new drug approvals, NIOSH is currently evaluating and designating drugs released during the time period covering the fall of 2006 to the end of 2009. 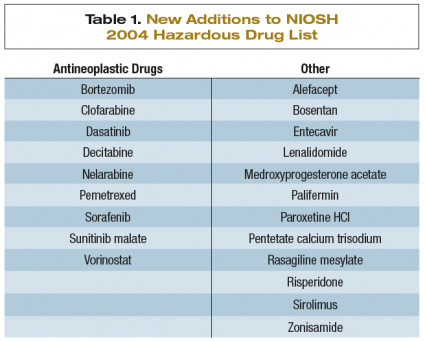 Of note, while IV-administered antineoplastic drugs continue to make up the bulk of drugs designated as hazardous, more oral medications are being included due to the increase in the number and use of oral chemotherapy. Oral drugs pose a different type of problem, especially if they are crushed or broken for certain populations such as pediatric patients, the elderly, or patients unable to swallow them. 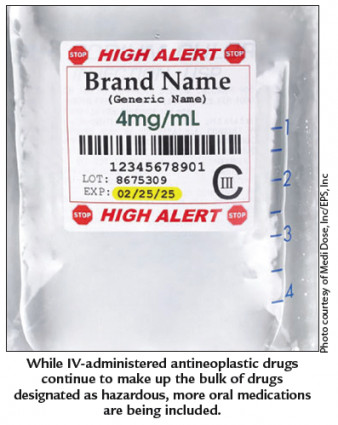 Developing Your Facility’s Hazardous Drug List
The NIOSH list is meant to be a guide for hospitals and other institutions to follow when they develop their own list of hazardous drugs. Not all hospitals use all the drugs on the NIOSH list and some may use drugs that are not contained on the list but are hazardous nonetheless. Hospitals need to be aware of potentially hazardous drugs when considering adding a new drug to their formulary. For guidance on this process, see the original 2004 alert, as well as its update found in Appendix A of the 2010 alert.

Whether you develop your own list or rely on the NIOSH list, it is essential that all potentially exposed employees be made aware that a drug is considered hazardous. This not only includes pharmacy and nursing personnel, but also individuals in receiving, those responsible for handling hospital waste, and laundry personnel who handle contaminated bedding and other materials. Although there are drugs other than antineoplastic drugs listed as hazardous, these are often not given the respect “chemo drugs” are given, yet are capable of commensurate damage. In addition, several antineoplastic drugs are now being used in a variety of other specialties, such as rheumatology, so these employees need to be made aware of the risks associated with them.

Growing Risks
Given the increase in both the number and applications of hazardous drugs over the last decade, it is clear these drugs are going to be with us for a long time. The number of cancer and other patients who do, and will, require these drugs is constantly increasing as the size and average age of the population grows. A soon to be published study by NIOSH documented widespread environmental contamination within hospital pharmacies from several antineoplastic drugs, and such contamination increases the potential for exposure of the pharmacy personnel, and others. In fact, two of the pharmacists in the study had one of the drugs present in their urine, indicating significant uptake from the environment.

While newer technologies, such as robotic IV preparation devices may help mitigate exposure to these drugs, there will still always be a need for some level of human interaction, such as filling and cleaning the devices, and transporting and administering the drugs. In addition, new advances and technologies have the potential to introduce new exposure risks for workers. For example, the increased use of special treatment procedures such as isolated limb perfusion, bladder instillation, and inter-operative chemotherapy will put new groups of workers at risk for exposure, as will the increasing use of chemotherapy in veterinary practice.

Furthermore, nanotechnology has already made headway into drug delivery systems and will most likely expand its foothold. The reality of this trend begets many questions, including:

Conclusion
These are just some of the issues that will need to be addressed in the future. For now, the updated list of NIOSH designated hazardous drugs should provide, at the very least, a building block for establishing your own facility’s hazardous drug list, and the continuation of this review process should encourage you to remain current in both education and work practices. These drug products, by design, are insidious and powerful. By enforcing education, vigilance, and proper handling, we can limit the effects of these drugs to their intended targets and maintain a safe environment for both employees and patients.

Side Effects of Hazardous Drugs

We are all aware that there are possible side effects of antineoplastic drugs found in patients treated with high doses, but there are published reports that associate a number of acute effects from exposure to hazardous drugs at any number of levels. These effects include skin rash, headache, hair loss, mucous membrane irritation, and others. Adverse reproductive effects also have been demonstrated in health care workers exposed to these drugs. A number of studies have reported significant increases in markers of genetic damage such as chromosomal damage and other types of DNA damage. Although many antineoplastic drugs are known or suspected carcinogens, cancer has not been studied in any systematic way in health care workers.

Thomas H. Connor received his BS and MS in microbiology from the University of Rhode Island. He received his PhD in environmental toxicology from The University of Texas Medical Branch, Galveston, Texas. After graduation, Tom taught courses on environmental and occupational health, and genetic toxicology at the University of Texas School of Public Health in Houston, Texas from 1982 to 2001. Tom joined NIOSH in 2001 as a research biologist focusing on occupational exposure to hazardous drugs. Tom was the lead author on the NIOSH Alert: Preventing Occupational Exposures to Antineoplastic and Other Hazardous Drugs, along with other related NIOSH documents. Tom has lectured extensively in the United States and abroad on hazardous drug exposures in healthcare. In 2008, he received the ASHP Board of Directors Award of Honor recognizing almost 30 years of research involving the protection of healthcare workers from hazardous drug exposures. In 2010, he received the International Society of Oncology Pharmacy Practitioners Achievement Award for his role in helping to develop international safe handling guidelines for hazardous drugs.