Scotland Medical Center is a 154-bed health care system located in Laurinburg, North Carolina, that includes a 50-bed long-term nursing care unit. Though we are a small rural health system, we offer a full range of health care services, from family medicine and general surgery to chemotherapy and radiation oncology at our cancer treatment facility, operated in affiliation with the Duke University Medical Oncology Network. Our pharmacy team, which operates on a centralized model and includes 14 full-time equivalent (FTE) employees—four staff pharmacists, two clinical pharmacists, five certified pharmacy technicians, one oncology pharmacist, one oncology technician, and one administrative position—supports a clinical staff that treats an average of 75 inpatients daily and performs more than 4,400 surgeries annually. In addition, about 36,000 patients are treated in our emergency department annually.

Outgrowing the Operational Space
Several years ago, it became apparent that our pharmacy department had outgrown its operating space; with 10 FTEs filling about 45,000 to 50,000 doses per month in less than 750 sq ft, it was difficult to work efficiently. For both functional and aesthetic reasons, we also needed more up-to-date features, such as an IV anteroom—required under USP <797> regulations—to augment sterility and safety, as well as a dedicated order entry area and additional office space. Above all, we wanted to improve our workflow to enhance efficiency.

In order to properly accommodate our workload, we planned to double the size of our pharmacy to 1,500 sq ft, and then began considering vendors to help us maximize the new space with the right layout and fixtures. Fortunately, administration understood the need for an enhanced space and were supportive of the project and its budget requirements. As a small facility, overall cost and getting each element right the first time were very important to us, so we needed a partner to design the layout as well as complete the installation quickly and efficiently. In addition, we needed to build in the flexibility to adapt our layout to future needs as far as changing the location, type, and configuration of shelving, drawers, and other components. This was key to establishing the long-term value of the project. Though we considered several vendors, Metro Lionville stood out to us, in part because their representative wanted to come out and meet with us and review the space ahead of time, whereas the other vendors we considered largely wanted to work out design details over the phone. Maximizing Limited Space
Even though we were gaining a much larger space, we understood the importance of making good use of every square inch. Our planning consultant worked with us to take a comprehensive review of our needs, paying particular attention to order entry, picking stations, and sterile preparation areas. For example, key to the layout is the center island, which provides a preparation area as well as a designated space for all final product checks prior to delivery to patient units. The result of our planning was a customized layout that helped our pharmacy workflow run more efficiently while maximizing storage and workspaces. In addition, the modular design of the components offered the flexibility we wanted for future changes.
From an aesthetic standpoint, custom woodworked features added to the appeal of the pharmacy. We wanted to incorporate a small employee break area and Metro came up with a special design that offered the built-in look of custom cabinetry, and made the area an especially attractive place for our staff. They also supported our needs during the construction process, which was completed in multiple stages. Metro provided quick turnaround on installation that enabled us to stay on schedule and continue practicing with relatively minimal disruption. Our staff moved three times during construction as different parts of the new operating space were completed and this approach enabled us to meet patient needs throughout the process despite the transition. When the paper design required some minor adjustments during the actual construction, the installers were able to adapt as needed.

Final Results
One of the most valuable design features that Metro developed for us was the island-style counter where our staff can pull and sort medications. In the old space, we had to use carts, which was not efficient or comfortable for our staff. As of today, the countertops and fixtures have stood up well and are in excellent condition despite five years of heavy use.

Based on the success of this pharmacy remodel, which was completed in January 2007, we also turned to Metro for help with a new inpatient pharmacy for our long-term nursing care facility. While we had developed an initial layout internally, Metro helped us redesign it to make better use of the space. Again, they guided us at each step in the process to plan, design, and install their Lionville fixtures for a 250-square foot facility, which helped the facility open on time in April 2011 based on a quick, four-month timeline.

These projects have enabled our pharmacy team to adapt to growing demands, with volumes increasing to about 60,000 prescriptions per month. Metro’s expertise in designing and installing fixtures to meet our specific needs has enabled us to manage this expansion with minimal growing pains. 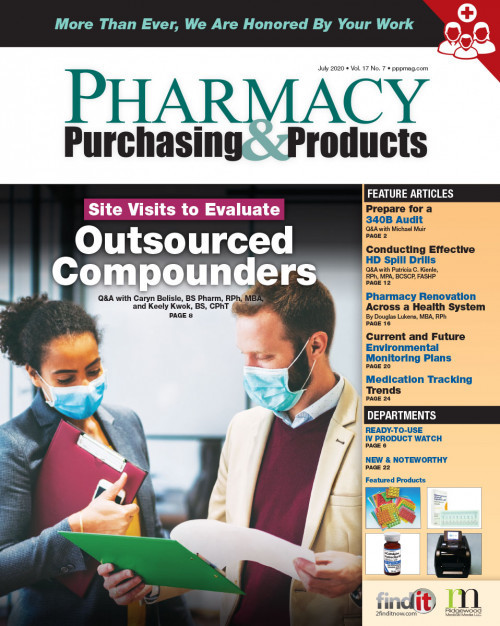